10 of the funniest things about being a dad, according to comedian George Lewis 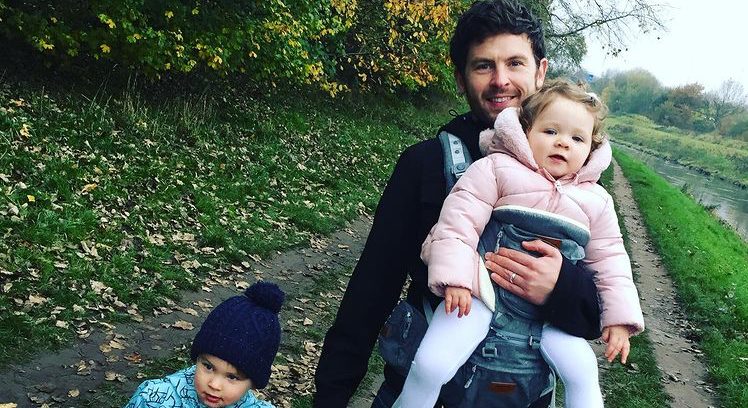 It’s a serious business being a dad – after all, you’ve created and will have a major role in shaping the personality of a real live human being.

But happily, there’s a flip-side to the weighty responsibility of being a parent, and it’s one comedian George Lewis is keen to share in a bid to bring some light to his often exhausted, busy and bewildered fellow dads.

Father-of-two Lewis, who’s appeared on ITV2’s Stand Up Sketch Show and has written for shows including Have I Got News for You and 8 out of 10 Cats, has just written the light-hearted look at being a dad, Don’t Panic!, which features dad observations from fellow comedians including Adam Kay and Romesh Ranganathan.

“Being a dad is probably the most confusing, frustrating and infuriating thing you’ll ever do,” says Lewis.

“Among all the nappy changes, extreme sleep deprivation and cleaning up of so much food you don’t know who you are any more, there’s plenty to laugh about.

“And the more you laugh, the less you’ll panic. Or you’ll just panic and laugh at the same time and look completely unhinged.”

To prove to doubting dads that there’s a funny side to fatherhood, Lewis highlights some of parenting’s lighter moments…

1.     You become very aware of how your parenting is viewed

The first big moment you feel on show is when you announce the pregnancy to everyone, says Lewis. “There are different styles you can employ for this announcement and you’ve probably seen a few of them. Some people post pictures of scans next to a cinema board announcing ‘Baby Lewis coming next June’; some post black-and-white photos of anonymous babies’ feet with a phrase on it like ‘our family is about to get two feet bigger’, and I’ve even seen a picture of a dog wearing a t-shirt that says ‘I’m going to be a brother’, which raised a hell of a lot of questions in my head.

“When we can laugh about it, it helps lift the pressure, which you’ll feel right from the start. But you’ve got to try and let go of that.”

Lewis says that while both parents might be terrified about the birth, it can be the setting for some funny moments.

“Unfortunately, it’s often the dad who’s the butt of the joke,” he admits, and recounts a story from former doctor Adam Kay, who said: “I think the gold medal goes to a dad who, on watching baby crowning, shouted, ‘Where’s its face?!’, causing the mum to scream, the baby to fly out uncontrolled and a rather big tear to occur. Turns out the baby’s face was fine and was located – as is traditional – on the front of its head. (Babies are generally born facing down, by the way.)”

3.     The ridiculousness of kids’ tantrums

Lewis points out that when you’re a parent you’re faced with extremes of human emotion, like toddler tantrums, and it’s your job to make sense of it.

“Kids’ tantrums can be extreme,” he says.

“I’ve seen my son drop to the floor kicking his feet out, arching his back, pouring with tears and screaming until he could no longer catch his breath, all because he’d finished the cracker he was eating. He had another cracker in his other hand.”

“Dads will often completely wing it with their discipline techniques in the hope it’ll magically work,” Lewis observes. “But be careful, because it’s easy to mess up.

Lewis points out that the rules of common decency go out the window for babies.

“Babies are disgusting,” he insists. “They have no manners. They let all of their bodily functions happen without embarrassment. But there’s something liberating about spending all your time with a person who’s so untethered by society’s stuffy rules. Someone who’ll happily cough in your mouth, p*** in your face and s*** everywhere. It’s so disgusting and inappropriate, you can’t help but laugh at the madness of it all.”

6.     A whole new take on The Very Hungry Caterpillar

Fatherhood forces you to see art and literature in a new light, Lewis points out.

“After a hundred or so reads, The Very Hungry Caterpillar becomes a different kind of story; a victim of his own greed, he is doomed to make the same mistakes again and again, and you are forced to watch. It’s like an episode of Black Mirror.”

7.     Watch what you say when you’re changing a nappy

“There’s so much new stuff to work out,” says Lewis. Some you’ll find easy, some takes a bit of getting used to. Like a lot of dads, I initially felt more comfortable changing my son’s nappy than my daughter’s because, as I said to my wife much too loudly one time when we were out in public, ‘I know what I’m doing with a penis.’

Lewis says dads can be forced to see themselves in a different light. “You might not want to but, like I say, you can be forced. You’ll notice characteristics of yours in your kid – or someone else will. For instance, you might say to your partner, ‘He’s got your cute little nose’ and she might reply, ‘And he has your manipulative streak.’”

Lewis says one of the biggest perks of being a dad is also one he’s most ashamed of.

“When you perform normal acts of parenting in a public space, you’re treated like a war hero. The same tasks that wouldn’t get the mother a second glance has middle-aged ladies fawning over you and the general public rising to give you a standing ovation,” he says. “I once cleaned my daughter’s face in a coffee shop, while there was also a mother there feeding one of her kids while breastfeeding the other. Yet it was me that all of the other customers looked like they were going to start a slow hand clap for. It’s completely sexist and unfair, and so hard not to enjoy.”

While Lewis admits there will be stressful and worrying times and plenty of points where you don’t know what’s going on, he says: “If I could give you one trick to blag your way through, it’s this: the perfect phrase for the learner dad whenever there’s a problem is, ‘Might be teething…’. More often than not, you’ll be right.

“I don’t think I’ll ever stop using it. When my daughter arrives home in tears at 23-years-old and says, ‘I’m leaving him!’, I’ll undoubtedly turn to my wife and say, ‘Don’t worry, she’s probably just teething.’”

Don’t Panic! All The Stuff The Expectant Dad Needs to Know, by George Lewis is published by Monoray, priced £12.99. Available now.