4th of July Fun Ideas for Involving the Kids 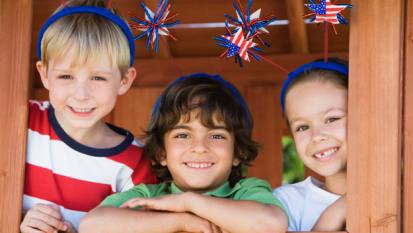 James is from Oklahoma but now resides in Upstate New York. He is a veteran of the Navy, where he served as a Hospital Corpsman with the Marine Corps. He and his wife are older parents, having their first child when they were in their 40's. He is an outspoken critic of officiating in sports (read "he yells at the TV during football") and is master of the art of grilling (only according to everyone who has eaten at his house). A former Bouncer and Bartender, he now pays the bills as a Security Manager for a commercial agriculture company. He and his wife Danielle are the proud parents of a single daughter who is the light of his life.


4th of July. Independence Day. Barbecues, fireworks, and food. It’s when we celebrate our freedom.  We learn this in school and from watching our families as kids. But we as parents need to take a second and think about what we are really teaching our kids about this day, and take the opportunity to help them learn that this isn’t just about a day off work and Dad drinking a beer with the neighbors. We need to teach what this day means and where it comes from.

Most people, when asked what the meaning of the 4th of July is, will say something along the lines of “Independence Day!” or “It’s when we beat the British.” Actually, these really aren’t the case. WARNING! History lesson incoming:

On June 11, 1776, the Second Continental Congress met in Philadelphia and formed a committee to draft a document that formally severed their ties to Britain. The committee included Thomas Jefferson, Benjamin Franklin, John Adams, Roger Sherman and Robert R. Livingston. Jefferson wrote the first draft. After a total of 86 changes were made, the Continental Congress officially adopted the final version on July 4, 1776.

So July 4th isn’t about some great battle or the final day of British rule. 4th of July is about something even more important. It’s about the day that we made the decision to be our own nation, our own people. Decisions like that aren’t made easily or often. It’s even more rare that they are successful. But there is a price to be paid for those kind of decisions. In this case, the cost was eight years of warfare and approximately fifty thousand dead between the two sides. Doesn’t seem like much, until you realize that the populations of both countries was much smaller. Today, that would be approximately 4 million people.

The Fourth of July presents us as parents with a great opportunity. It’s a chance to teach our kids a bit about history (which, in my opinion, everyone should know bit about), a chance to talk about how decisions (even one’s we feel are right) can have consequences, and that there are two sides to every story (I’m fairly certain that my British friends pay no attention to July 4th, and if they do its probably looking at us and shaking their heads at our antics.).

So how can we teach our kids something meaningful when they day is filled with constant distractions, loud noises, bright lights, tons of food, and all the sugary drinks a growing body needs? Well, we have to plan for it. We have to set aside some time on a potentially very busy day to make sure we are giving the kids not only some quality time, but some time to help them learn why exactly Mom is wearing a red, white, and blue bathing suit and Dad has on an Uncle Sam hat at 8 am.

Now, I’m not talking about sitting them down and giving them a history lesson on the “Real Meaning of Independence Day”. But getting them to understand what it means is important, and to do that, you have to get their attention in a fun and engaging way. Here are some ways you can do it.

Go online and print off a copy of the Declaration of Independence. Cut strips of the first couple of paragraphs and hide them around the house. Have your kids (or kid and family and friends) team up and search for “The Lost Declaration”. Have them find the pieces and put them in order (might have another, intact copy, to assist in the matter). Winner gets to be the President for 4th of July.

No, its not what you think. Water balloons are fun. Every kid knows this. Get red, white, and blue balloons. Or better still, clear balloons with food coloring added to the water. Give the kids a plastic bat, and pitch the water balloons to them. The balloons will explode, so running around the bases is kind of pointless, but you could set up something as a “base” and have them run to it and back to the home plate before they get tagged.

Clear plastic wrap. Stretch it out flat on a window, and remove any big air bubbles. Give the kids red and blue markers (clear is the white) and let them draw directly on the plastic. When the sun comes through the window, they have created their very own light show.

How do these things teach your kids about Independence Day? They don’t. But they give you the opportunity to do something with them, and during that time you can do what we all need to do as parents…

…talk to our kids.