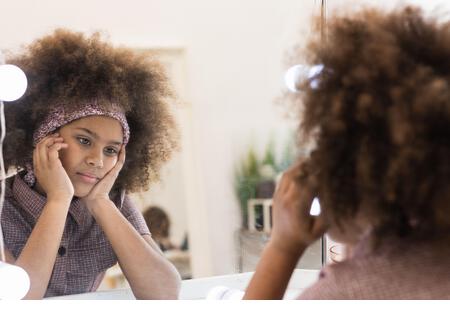 The number of people with poor body image is growing in the UK – and it’s an even bigger problem for children than it is for adults. A survey for a new Government report, Changing the perfect picture: an inquiry into body image, found 61% of adults and 66% of children feel negative or very negative about their body image most of the time.

“After a decade of soaring social media use, increased exposure to online advertising and a persistent and pervasive diet culture, our concerns about the way we look are starting younger, lasting longer, and affecting more people than ever before,”

Changing the perfect picture: an inquiry into body image

Lockdown has “undoubtedly worsened existing body image anxieties,” it confirms, and in a host of recommendations, it stresses that “encouraging positive body image during childhood and adolescence must be a priority.”

A major driver of negative body image, particularly for young people, says the report, is edited and filtered photos used in advertising and across social media to digitally enhance appearance in photos.

Body image expert Professor Phillippa Diedrichs, a research psychologist at the Centre of Appearance Research  at the University of West England, says

“Filters and editing apps have dramatically changed the way we can be creative on social media, but when they distort the way we really look in an attempt to meet unrealistic standards, they can have a lasting and harmful impact on girls’ self-esteem.

“It’s essential we have tools in place to help support young people to develop the skills they need to use social media in a healthy and productive way.”

“We’re in an epidemic of body shame and it’s affecting children at a younger and younger age,” says Forbes, who points out that evidence shows children who feel bad about their body are not only less likely to make healthy lifestyle choices but are also more likely to engage in behaviours that risk their health, like smoking, binge drinking or unhealthy eating.  In addition, poor body image can affect how children behave socially, and how they form relationships, she says.

“The good news is that body image isn’t a fixed entity and changing the body image environment our kids are growing up in can make a huge difference to how they think and feel about their own bodies,”

It’s a common misconception that in order to raise body happy kids, parents need to feel good about their own bodies, says Forbes. “You don’t need to have totally healed your own poor body image to raise children who are at peace in their bodies,” she explains. “Just being mindful of the language you use when talking about your own body can have a huge impact.

“So, trying not to vocalise negative feelings about your body in front of your kids, and really focusing on what your body and the bodies of your children can do instead of how they look is a great start.”

“Every time children hear adults vocalise opinions about other people’s bodies, it teaches them that their bodies aren’t their own, and that it’s OK for other people to define and make judgements about their bodies. This is bad news for body image because not only does it uphold an ‘ideal body’,  it reinforces the idea that the shape of our bodies is where our value lies.”

Many of the messages children receive around body image are related to the way we talk about health, says Forbes.

“Children learn that health looks a certain way, and that their health can be measured by how their body looks – even if it means they need to do unhealthy things to get there. But health is complicated and is about far more than just what we eat and how we move our body.”

Rather than teaching children that health can be judged by someone’s appearance, it’s better to talk about the behaviours and choices we can make to look after our bodies, like moving for fun, getting enough sleep, managing screen time, and being outside.

“These are things that are good for all children regardless of body shape,” she stresses. “And remember, even if we all ate the same food and moved in the same way, we’d still all have different shaped bodies.

“Empowering children to make healthy choices based on how their body feels instead of what it looks like is a great step in building body image resilience.”

Children often think in literal terms, and young children, in particular, don’t yet have the cognitive ability to unpick the nuance in conversations. So teaching a child to put some food on a pedestal and vilify others can lead to damaging assumptions about food and bodies which can impact their body image and their own relationship with food, Forbes explains.

“Eating kale doesn’t make you a more worthy person, and eating chocolate doesn’t make you a bad one,” she says. “What’s more,  research shows that taking a neutral approach is more likely to mean your kids actively engage with movement and may be more open to eating the very foods you’re keen for them to eat more of.”