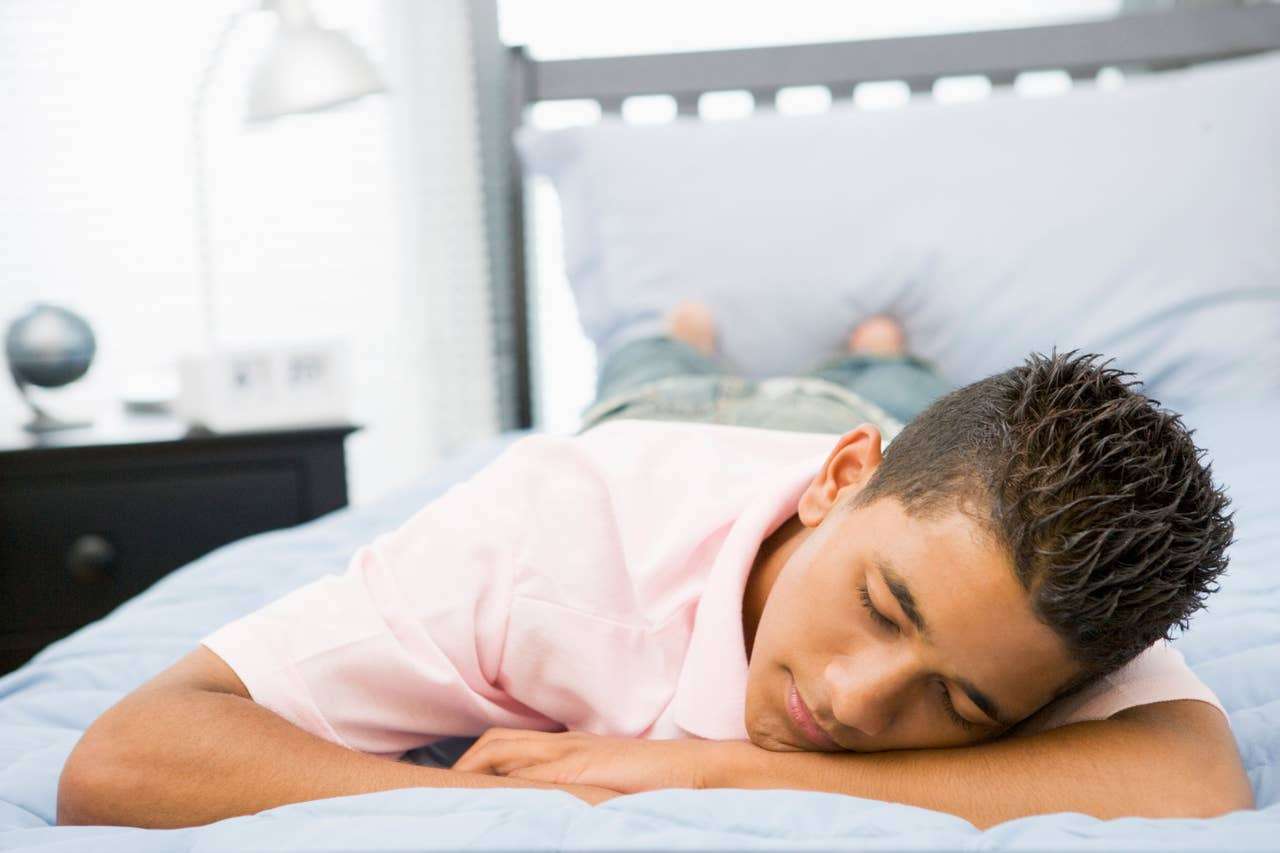 As teenagers battle through exam season, many parents will be concerned about their stress levels as well as their revision (or lack of it).

One big issue underpins their wellbeing and ability to learn – the amount of sleep they’re getting.

Sleep deprivation is “one of the greatest threats to our teenagers’ physical and mental health,” according to Heather Turgeon and Julie Wright, authors of the new book Generation Sleepless. They say adolescents are caught in a perfect storm of omnipresent screens, academic overload and early school start times, which means they’re operating in a constant state of sleep debt.

“If you want to shock parents, teachers and sports coaches, tell them teenagers need over nine hours of sleep every night,” says child sleep expert Wright.

“Even more alarming is the reality that today’s teenagers sleep two to three hours less than that every night of the school week, racking up 10 hours or more of sleep debt each week. In fact, today’s teenagers are the most sleep-deprived population in human history.”

Wright explains that contrary to teenagers’ own beliefs, they aren’t actually mini-adults and are going through a critical period of brain development similar to when they were toddlers.  And this means they need a lot of sleep.

“A massive amount of restructuring, refining, pruning and reorganisation takes place in the adolescent years, and this brain work mainly takes place during sleep,” she stresses.

Here, Wright and Turgeon outline their tips for how teenagers can get the right amount of sleep – and why they need it so much…

1.  Bedtime should be early enough to get the right amount of sleep

Turgeon advises teens to get to bed between eight to 10 hours before the time they need to wake up for school. “For a teen, eight hours is adequate sleep and nine to 10 hours is optimal,” she explains.

Teenagers should resist the temptation to sleep in on weekends, says Turgeon. “This confuses the body clock and makes the following week harder. Keep your wake time on the weekends to about one hour of your school day wake-up.”

3. Get some morning sunshine

Adolescents should try to get five to 10 minutes of morning sun, even through the clouds, and regardless of the season, within one hour of waking up. “Morning sun presses ‘go’ on the internal clock and regulates our sleep cycle,” explains Turgeon.

Wright says teens naturally have a later biological sleep clock. “The time when their bodies are ready to sleep and wake shifts about two hours later during the teen years,” she says. In addition to this natural sleep onset delay, today’s teens have to cope with an increasing homework load and pressure to pile on more and more activities.

“A perfect storm of factors has led to this crisis, and the culprit that has taken this storm to hurricane levels is the advent of the smartphone, social media, video games and the like. The insidiously addictive reach of big tech into the lives of teenagers delays their bedtimes and disrupts their nights to a degree we could never have imagined.”

Struggling with sleeplessness? Exposure to the weakest glow of blue electronic light – such as a notification flashing up on your mobile phone – can wreak havoc with your body’s circadian rhythms, keeping you alert when you should be sleepy. #Sleeplessness pic.twitter.com/d6iSWaJh0D

Technology should be put ‘to sleep’ outside teenagers’ bedrooms one hour before bed. If they use their phone as an alarm, simply use a regular alarm clock instead, advises Turgeon.

6.  Allow for a wind-down period before bed

The chemistry for sleep begins to change around two hours before bedtime, explains Turgeon, so the brain is tracking signals like light and activity to know it’s time to wind down. “When the sun’s setting, turn down the lights inside your home to mimic this natural pattern,” she advises.

“Teens should enter a ‘stress-free zone’ in which they don’t talk about important or anxiety-inducing topics, and try to say goodbye to friends online at least one hour before bedtime. This makes it possible for their brain to disconnect and allows them to become sleepy.”

7.  Getting more sleep means teens will be less moody

Wright says it’s no coincidence the current mental health crisis teenagers are experiencing has grown at the same time as the decline in their sleep. She points out that studies show sleepless nights lead to low moods, anxiety and depression, and explains: “A sleep-deprived brain shows lowered activity in the prefrontal cortex, the source of reason, perspective, critical thinking and emotional regulation, and heightened activity in the amygdala in the lower brain where reactive, defensive and more negatively-skewed outlooks live.”

And she adds: “Teens who seem grouchy or lazy or non-responsive are probably severely sleep deprived.”

Do your teenagers get enough sleep?  Let us know your experience in the comment section below!