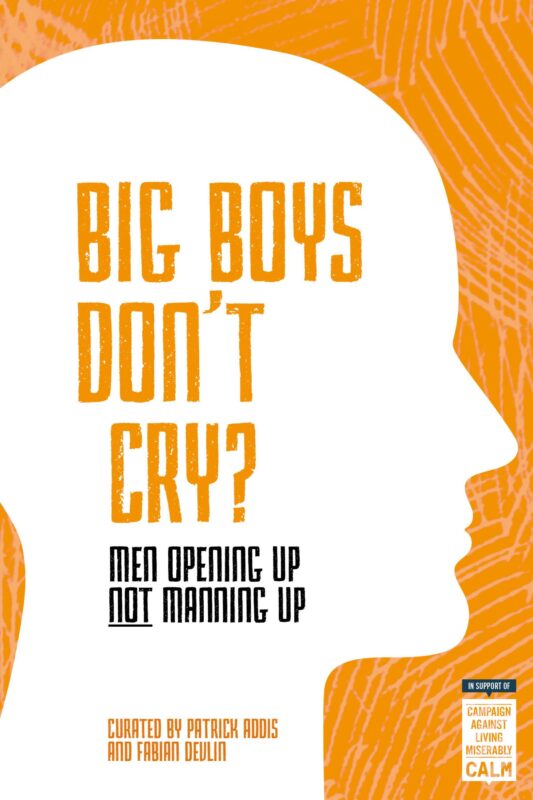 Men’s mental health is something we need to talk about. Suicide is the biggest killer of men under 45 making this an issue that is in desperate need of addressing. These were the same thoughts that childhood friends Fabian Devlin and Patrick Addis had when they decided to write their book, Big Boy’s Don’t Cry, an amazing self-help book for men, compiled of 60 short stories from blokes and their partners. It tells of real-life experiences, and the advice that they would give to others having experienced it themselves.

The book itself was released last year; with the two authors giving themselves the deadline of mental health awareness week 2020. It could not have come at a better time, with the first lockdown causing an increase in mental health problems that were going unaddressed thanks to the raging pandemic.

How did you set about finding these stories?

We started off with our own networks to find men’s mental health stories and then branched out to advertising in hospitals and on social media. We were overwhelmed by the response: over 300 people contacted us and we narrowed it down to 60 short stories from men – and partners of men – with lived experience of mental illness. The men come from diverse backgrounds – we have stories from successful businessmen, the homeless, professional sportsmen, students and lawyers.

17-year-olds to 70-year-olds got in touch with a range of mental health challenges including anxiety, panic attacks, depression, obsessive-compulsive disorders, suicide ideation and post-traumatic stress disorders.

How do you want your book to change people’s attitudes towards male mental health?

Our tagline is ‘Men Opening Up, Not Manning Up’ and this captures how we want to change people’s attitudes towards male mental health. Don’t dismiss men’s mental illness with a ‘man up’ or ‘big boys don’t cry’ – it doesn’t work and it’s dangerous. Three times as many men take their own lives than women and it’s the biggest killer of men under 45. So we need a different approach, a more open approach. Get rid of the stigma, the silence, the shame. And hopefully more men will seek the help they urgently need.

A lot of the stories include a combination of mental health problems – do you find that in today’s society too many men are bottling up their emotions?

Men do generally bottle up their emotions. I know I did and there were certain emotions, such as anger and sadness, which I didn’t really know how to express. It was very much a case of the stiff upper lip approach when I was growing up – don’t show your emotions, especially not sadness otherwise you’d be targeted at school and bullied. So you keep them locked inside, festering until later in life and when you least expect it they rear their ugly head. My therapist said that suicide is the ultimate angry act and that it is anger turned inwards. This makes sense to me and to this day I often find it difficult to tap into these emotions, but talking and opening up always helps.

The problem with bottling up your thoughts and feelings is that you can get a distorted view of the world. You think there’s no escape, you feel trapped and that’s when it can become dangerous. My message to anyone who feels as desperate as I did is this: You are not alone. There are always options. There is always hope.

What are the best ways to help with dark thoughts?

When it comes to these negative thoughts, you really need to try to get into the habit of learning the skills to prevent going back into such a bad space. I still get ill and this is something I am accepting of, but it helps so you don’t go so far into that dark space. Do things that will distract you from going too far into a negative cycle. Distract yourself with a box set, or something that will engage a different part of your brain.

“If I could play a game of chess, or an app on my phone I could lock into a different part of my brain,

“Be open to things, try things; exercise mindfulness, sudoku doesn’t matter. It’s about finding the tools that work for you.”

What did you find to be the best ways to deal with your mental health issues?

Often when you are dealing with mental health issues it can feel as though no one else in the world knows what you are going through. Attend peer support groups! The one that I attended, Hope in Depression ran a course for six weeks with practical advice from diet to exercise.

While this might not be the one for you, there are plenty of other places to look for help. This could be as simple as going to your GP or the NHS.

“GP’s now talk in physical terms, so if you say that you don’t think you should take antidipressants, they will say ‘well whats the difference between that and taking insulin if you are diabetic’

While you may think that the NHS has massive and long waiting lists to be seen to by a therapist, Fabian says to sign up anyway. He only had to wait a month before he was able to see a therapist for CBT.

If you had one message to get across, what would it be?

The message from me and the message which is a golden thread running throughout the book is to open up and talk. It can be so difficult but you will never regret it.  If you can talk to somebody, it could be a friend, your partner, your GP, the Samaritans or CALM, do it for other people, do it for someone you love, it can only help. You are not alone in this issue and it’s not uncommon to go through it. Don’t be ashamed.  There are always options, don’t think there aren’t solutions to your problem.

To order a paperback copy of Big Boys Don’t Cry? email bigboysdontcrybook@gmail.com and quote ‘Dadsnet’ to claim a 10% discount (£9 for the book + £2 postage)