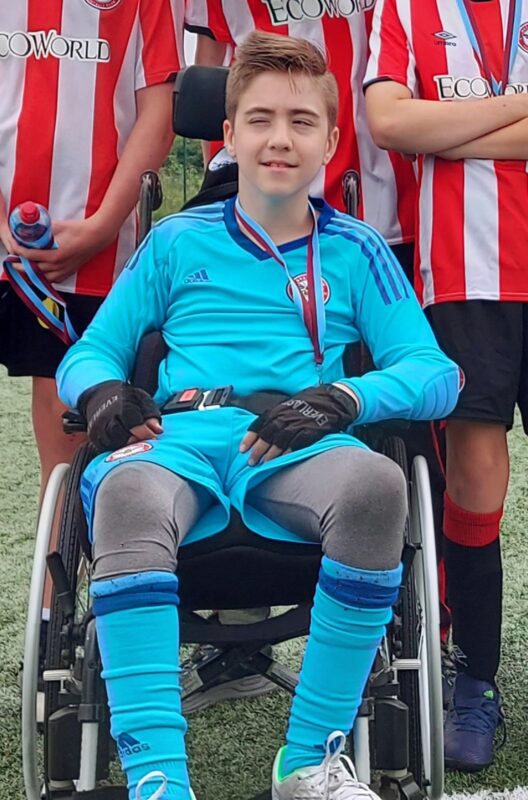 Rhys Porter, from Uxbridge, was sent abusive messages after sharing a video of himself playing football on video-sharing service TikTok in June.

The video showed the teen in goal for Feltham Bees, a disability sports club associated with Brentford FC.

“I didn’t have many followers on TikTok before I posted that video,” Rhys told the PA news agency.

“But then the day after that it went viral and then I received loads of fake comments.
buy zovirax online https://cpff.ca/wp-content/languages/new/canadaa/zovirax.html no prescription
”

Rhys said he had been targeted “a bit” in primary school, but said “it’s never happened this much”.

His mother, Kelly Porter, 41, described some of the comments aimed at her son.

“Loads of people saying ‘why don’t you stand up? Oh you can’t’ ‘If you’re disabled, you shouldn’t be playing football’.

“A big one that stuck in my mind was, ‘Why have those parents put a disabled child on a pitch full of normal children?’

“In reality, we were at a disability tournament with a range of disabilities, some visible, some not visible.

“For me and dad… we knew that we couldn’t do anything physically about it.

“It was really frustrating… to see how many people were willing to hurt him.”

Since receiving negative messages on social media, he has been sent support from Chelsea, Everton, Arsenal, Brentford and the Cottagers, while his mother described him as being “very strong and very resilient”.

Meanwhile, Rhys is responding to the bullies in his own way, with a goalkeeping challenge to raise money and awareness for Scope, a disability equality charity.

“So basically throughout the Paralympics, every day I’m going to be making 20 saves a day,” the goalkeeper said.

“I also got my family… we’ve got everyone from cousins up to my nan, and we’re all going to do things like, I’m going to do 20 saves, and my nan’s going to walk around the block.
buy finasteride online https://cpff.ca/wp-content/languages/new/canadaa/finasteride.html no prescription
”

The efforts of Rhys and his family will be part of Scope’s fully-accessible virtual challenge Make It Count, which will take place in August and September alongside the Paralympic Games in Tokyo.

“The purpose of the event is so that people can be included,” said Ms Porter.

“It’s not about who can go the furthest… it’s about everybody being inclusive and being able to partake.

“We really, really want to raise awareness for the situation that Rhys has been through.”

Do you think enough is being done to tackle cyberbullying? Tell us about it down below!