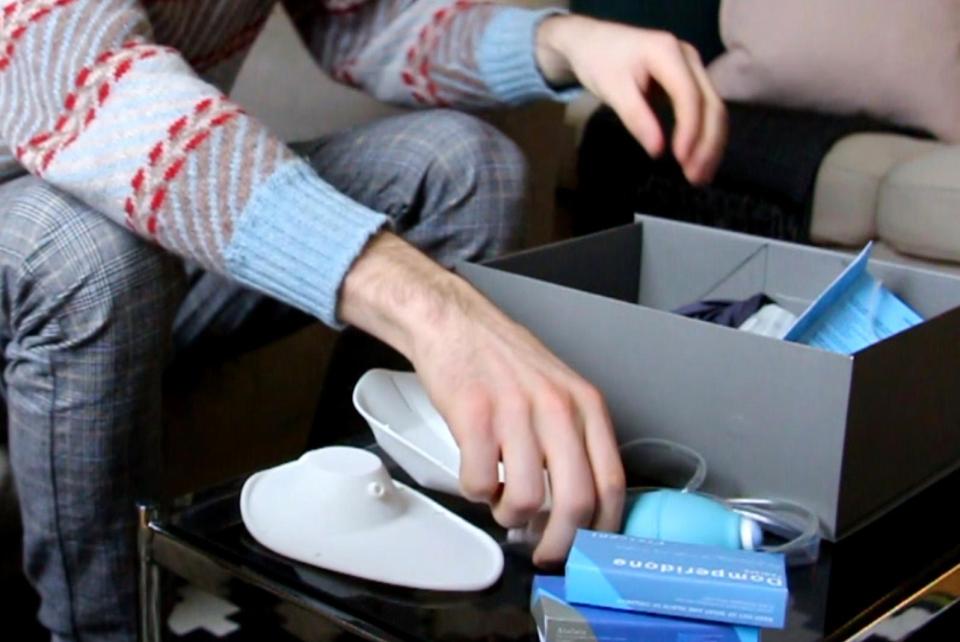 It’s always tricky when it comes to dads and breastfeeding with many dads feeling left out of the whole process. Of course, there are plenty of ways that dads can be involved the peripheral but now a new invention claims to help enable dads to lactate, meaning that dads might be able to actually breastfeed their baby.

This new phenomenon is being dubbed as ‘Chest Feeding.’

It would work by men taking hormones whilst their partner is pregnant to ‘grow milk ducts.’ However, Marie-Claire, the designer of the chest feeding kit, says that its side effects could see men growing “moobs”. Apparently this could be up to a B cup size. The side effects of taking female hormones is a condition known as gynecomastia.

This is still in the concept phase but doctors have warned that it is unknown as to whether men can actually grow milk-ducts or what effects the hormone will have on their body.

Marie-Claire hopes the kit will help fathers to feel more included when it comes to feeding their baby. She believes it could be available in 5 years time.

What’s in the kit?

Within the kit is the hormone progestin, required for the man to take once-a-day from the moment he knows his partner is expecting. Progestin is a form of the female sex hormone progesterone which helps stimulate the production of milk glands.

During the last 6 weeks of the pregnancy the man would then be required to take another hormone; domperidone, often prescribed to mums who struggle to breastfeed. This hormone stimulates another hormone; prolactin, which tells the body to produce milk.

You will also receive a pump and a compression vest (the male equivalent of a maternity bra).

In an interview, Marie-Claire told The Sun Online: “I was trying to create an empathy tool, something that could really help when a mum was struggling to breastfeed and could help a dad be of practical use.

“Those two drugs put together create three of the four hormones necessary for a man to product milk.

“The last one is oxytocin which is what triggers the ‘let down reflex’ and when a man or a woman holds their child.”

The reflex she  refers to the process of breasts letting flow down towards the nipple and into the mouth.

Usually, it’s triggered when the baby suckles the nipple, or even just hearing your baby cry.

“I developed the pump instead of it just being hormones and holding your baby to your chest because it works in the same way it would when a woman is struggling to lactate,” Marie-Claire said.

“Sometimes using a pump gets the ‘let down reflex’ going.

“The pump is the same thing, it’s just a little less intimidating.”

This isn’t a quick thing, though. She says that it will take the dad-to-be the full 9 months for the breast tissue to change and become ready.

The ‘moob’ side effect will also fade away once the dad has stopped taking the hormone.

Although the pump and the drugs are already available on the NHS, it’s unknown how much milk a man could produce. Or perhaps more importantly, if the milk produced would be as nutritious as mums.

All we need are some guinea pigs for testing it out on? I already have the moobs so that side effect doesn’t worry me at all! Anyone else?