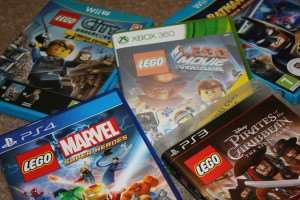 I have two girls aged 5 and 6 (or 6 and a half as the eldest would say!).  They’ve been playing video games with me for a good few years now, and the ones which we find most entertaining (and that are not too difficult) are Lego games.  Bear in mind that before having kids, I wouldn’t play a Lego game even if you paid me.  Now though, I see them as the best way to get children into video games, and at the same time introduce them to popular film franchises that we both can enjoy.

Thanks to the Lego video games, I been able to get both girls interested in Batman, Pirates of the Caribbean, Avengers, Star Wars, Lord of the Rings…the list goes on!  The good news is that the most recent Lego games look and sound great.  The developers TT Games started out creating licensed games without dialogue, now though they have a cast of voice actors that rival even most Hollywood films.  The games’ stories also full of warm and witty humour, which makes the experience fun for both adults and children.

Navigating the game’s levels are very straight forward.  Move left to right and if you find yourself stuck, simply smash everything on screen until you build a new piece to continue progressing.  Any puzzles you come across are almost always solved by matching the right power to the right problem, which was usually my cue to step in and help the girls when they started playing these types of games.  Now though they’re puzzle masters and can quite easily complete a story campaign in one sitting.

Genuinely, there is so much fun to be had from Lego games.  Also the control mechanics are exactly the same for every game, so the girls and I can play the newer titles and not have learn new button combos.  All too often I’ll hear the girls say, “Just one more hour!”, or maybe that’s what I say?  It may not offer a challenge to those more experienced player, but I bet that you won’t find many games chock full of content.

You can buy The LEGO Movie Videogame (Xbox 360)

here to get you going!