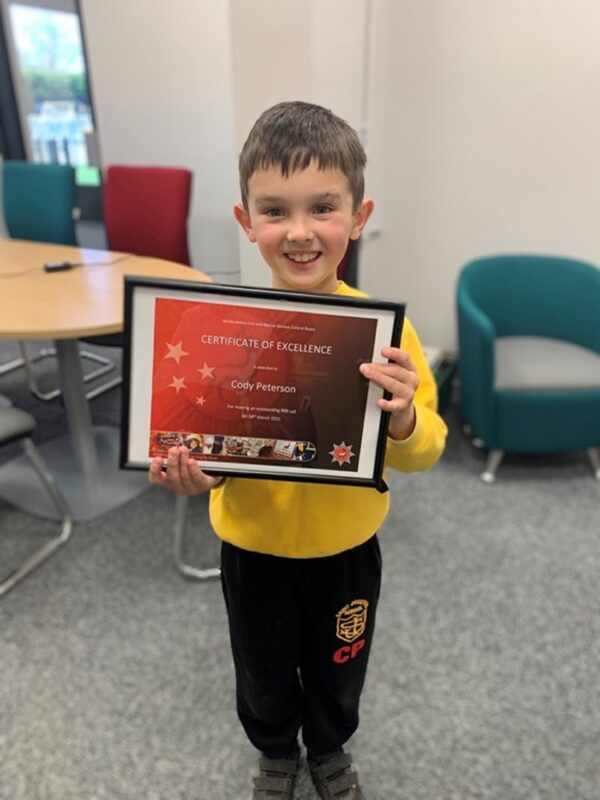 An eight-year-old has been praised for his calmness after he successfully called 999 and guided fire crews to a neighbour’s house that had caught fire.

Cody Peterson, of Cardiff Road, Watford, was asked to call emergency services by his parents while they rushed to try to help their neighbours at around 7pm on March 18.

Cody successfully guided the emergency services to the location of the fire, where three fire crews fought the flames.

Fortunately, the burning home’s resident had been outside of their home at the time and was later found safe.

Cody’s parents, Jo and Ray Peterson had rushed over to the property with a fire extinguisher and crowbar, but quickly found the fire to be too severe for them to face.

“We were all panicking, apart from Cody really. He just took it all in his stride,” said Mrs Peterson.

“We’ve always made him aware of what to do in an emergency, but he’s never had to put it into practice until that night.

“He was really calm. When I came back a few minutes later, he was still on the phone – and was still chatting to them and telling them what was going on. We were really, really proud of him that night, so proud of him.”

Cody was presented with a “certificate of excellence” by the fire service following his call.

“His superb skills when making the call showed a maturity beyond his years and impressed us with how calmly he listened and answered our questions in what was a potentially life-threatening situation.

“He was able to provide us with an address and exactly what had happened so far, what he could see and that both his mum and dad had gone to help but were away from the fire.

“Under the pressures of an emergency such as this we have many callers who find it difficult to relay this information accurately, but Cody was amazing. He should be extremely proud of himself.”

We at Dadsnet are very impressed with Cody, and he highlights how important fire safety is!