It’s not just dads, even Celebrity parents get it wrong at times – Kids fashion fails

Even celebrities can get it wrong when it comes to fashion, – they are human after all – and dressing fussy kids isn’t exactly an easy job. But this list of five child celebrity kids fashion fails really makes you wonder what their parents were thinking.

Helena Bonham Carter isn’t exactly a fashion guru herself. In fact, whenever she’s out and about she always looks like she’s been rummaging through the costume wardrobe on the set of a Tim Burton film beforehand. It looks like Billy Bonham Carter will be following in his parents’ footsteps. Perhaps he’ll develop his own oddball sense of fashion when he comes of age?

But, oddball doesn’t necessarily mean bad. If you like the quirky look, then check out these striped Milibe baby leggings. 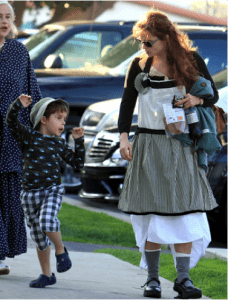 Like her parents – Will and Jada Pinkett Smith – Willow actually tends to top plenty of ‘best-dressed’ lists; which may seem a little shocking by the look of these trousers.

Here the singer looks like she’s come straight from a circus performance. But again, she is one of Hollywood’s youngest trend-setters, so it wouldn’t exactly be surprising if they start to catch on.

To buy some for your child Little Bou stock a wide selection of unisex red and white Milibe leggings similar to what Willow is wearing. 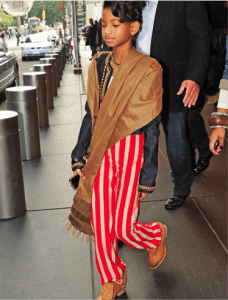 It’s all about comfort. Sam Sheen, daughter of Denise Richards and Charlie Sheen must’ve stepped straight out of bed when she was snapped wearing her pyjamas.

On the off chance, if you’re looking for some quirky and colourful PJ’s then 24 Studio supply a wide selection of designs; and best of all, you can customise them yourself! 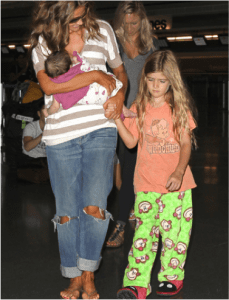 Glance at Bronx Mowgli Wentz in this photo and you’ll probably think nothing is wrong, but just take a look at the poor coordination.

The black hoody, shorts and brown winter shoes are cool, but they don’t exactly blend well together. But as one of the inventors of emo-fashion, perhaps Pete Wentz knows what he’s doing. 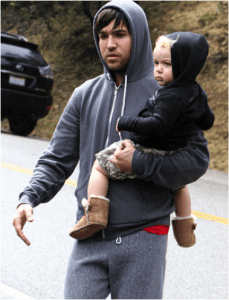 Throughout his childhood Maddox Jolie-Pitt received his fair share of attention from the press. Many of which praised his unique sense of style.

However, he seems to have taken this getup a little too far. There’s nothing wrong with a bit of faux fur, but this is a little overboard don’t you think?

After Suri Cruise – one of the most photographed celebrity kids ever – was spotted wearing the female equivalent, popularity shot through the roof. To get your kids involved in this new trend check out the faux fur jackets on Shop Style. 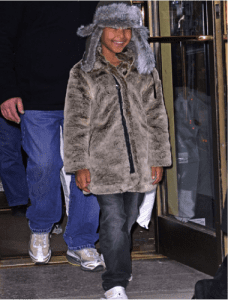 All in all, you can’t blame the kids as it’s the parents that do the shopping. Perhaps when they get a bit older they’ll look back at these fashion blunders and make some better choices.

Thanks again to Helen Cunningham for writing this post for us.