You might have heard the phrase CES 2015 bouncing around on both social media channels and the news this week. The Consumer Electronics Show, (let’s keep it at CES 2015 to save my typing) is the worlds biggest electronics exhibition which showcases the latest gadgets and gizmo’s due to be release in the coming year. With over 150,000 attendees and around 3,600 exhibitors ranging from small companies to large multinationals, there promises to be something for everyone. This years event is taking place this week in Las Vegas and so far has been dominated by the new 4K TVs and health/fitness trackers.
If your like me, you might be able to just about remember the big media focus on High Definition (HD) televisions and how much they promised to enrich your viewing, making things almost life like on your eyes. Well now we have the launch of 4K TVs.

4K TVs (also known as Ultra HD TVs or UHD) deliver four times as much detail as the current top end of HD televisions (1080p) can. In pixels that’s 8 million against a previous 2 million.
buy augmentin online https://gilbertroaddental.com/wp-content/languages/new/generic/augmentin.html no prescription

So what is this going to mean?

Well pretty much same as what was promised for HD televisions… More detail, more depth and more colour, very much described though as looking through a window rather than at your TV. I’m not personally sure I fancy looking through a window into Albert Square or feel like I’m helping Peter Andre out on 60 minute makeovers but I think that is more to do with Mrs F’s viewing preferences than the TVs fault. I do however like the thought of thinking I’m in a directors box at a football stadium or in a cafe when the latest action movie kicks off. I think for the sceptics out there, it will be like HD, in that you never realise what your missing until you see it in action.
Below I have picked out 3 of my favourites so far….
Sony Bravia X90C
Sony says that this is the worlds thinnest 4K TV which measures in as a minute 4.9mm thin as its thinnest point. It’s also comes with a wall mount which means it sits only 4cm from your wall. Sony has also adopted the Google Android operating system so expect it to integrate well with any smart phones of the same software too. 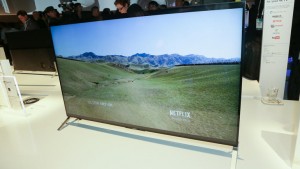 Samsung ‘SUHD’ TV
Samsung has showcased a range in what it calls ‘SUHD’ TVs claiming that unlike conversional televisions (including 4K) where red, blue and green pixels are merged/blended together in order to make colours, there “quantum-dot” technology means they are able to produce pure reds, blue and greens without having to filter out additional colours meaning a brighter and more colour result.
Sharp Aquos Beyond 4K Ultra HD TV
Despite its incredibly large name, Sharp claim to have developed a pixel splitting trick which enables it’s pixels create sub pixels and thus create twice as many making it effectively 8K, only time, or more viewing, will tell if this is the case.
The only sticking point I must say is that in order to appreciate the new technology, a screen size no less than 65inches is needed….
Now where is that money tree in the garden!!!

Do you think 4K Televisions will be worth it? Leave a comment below