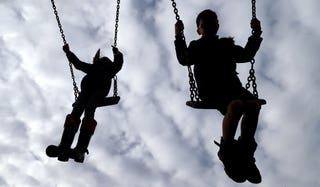 A law came into force in Scotland in December 2016 which made it illegal to smoke in a vehicle carrying anyone under 18.

Research led by the University of Glasgow, in collaboration with the universities of Aberdeen and Stirling, looked at data on all asthma emergency admissions to hospital in Scotland between 2000 and 2018 for children younger than 16.

The researchers found that after the smoke-free vehicle legislation was passed, asthma hospital admissions fell by 1.49% per month among pre-school children, though not in older children.

There was no change in admissions to hospital for other respiratory conditions or gastroenteritis following the legislation.

Professor Jill Pell, lead author from the University of Glasgow, said: “Our study demonstrates the significant benefit to children that smoke-free vehicle legislation has had.

“Our findings also suggested a possible widening of health inequalities whereby the relative reduction in childhood asthma hospitalisations was greater among those living in the most affluent areas.

“This could be due to different starting points or differences in car ownership or compliance with the legislation; but merits further research.”

Exposure of pre-school children to second-hand smoke is thought to be mainly due to parental smoking in their homes or family vehicles.

Globally, exposure to second-hand smoke is said to be responsible for an estimated 169,000 deaths in childhood each year.

Researchers also took into account the fact that in Scotland, childhood asthma hospital admissions had already fallen as a result of legislation in 2006 banning smoking in public places.

Estimates of the percentage of cases of childhood asthma attributable to second-hand smoke exposure range from 1.3% to 8.2%.

Second hand smoke exposure also increases the risk of exacerbating asthma symptoms among young children who already have the condition.

The study, Impact of smoke-free vehicle legislation on childhood hospitalisations for asthma: an interrupted time-series analysis of Scottish data over 19 years, is published in The Lancet Public Health.

Do you think it is good to stop people smoking in the car with children? Tell us about it down below!