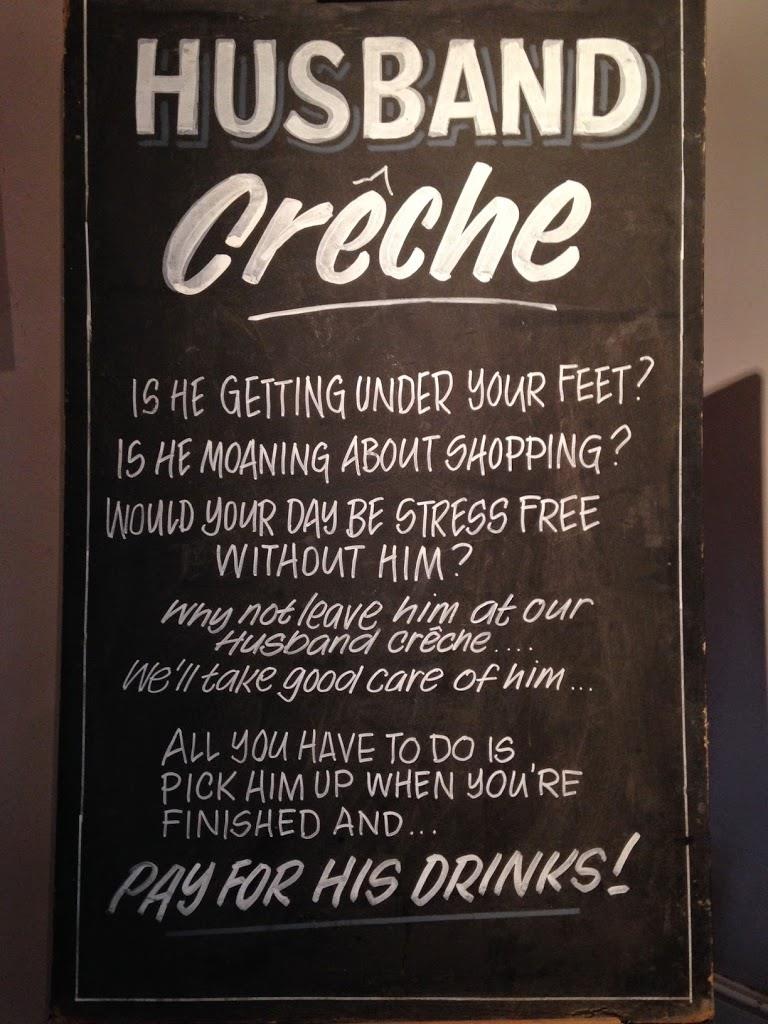 In life there are 2 types of people: geniuses and not geniuses. The author, developer and brains behind this marvellous innovation falls under the genius category. The wife, bless her, suggested that this was just an inn keeper (you don’t hear that phrase too often) re-branding his pub in a slightly comical way. Obviously she doesn’t appreciate the finer art of ground-breaking, pioneering and inventive thinking. I bet Steve Jobs’ wife didn’t say anything of the sort when he approached her after taking a bite out of an apple and a large smile on his face! (R.I.P)

And this got me thinking, despite the wife’s cynicism, maybe a ‘Dad Creche’ is exactly what hospitals need! How many women say the following during labour:

“Your just getting under my feet.
Your moaning.
I’d be much less stressy if you weren’t here.
Why don’t you go an get a drink? “

“You’re annoying me.
Turn Sky Go off!
Stop playing that game.
You can’t drink that in here.”

All the partner would have to do is drop him off on arrival to the hospital and pick him up when she’s “finished.”

Now I’m not suggesting that the hospital dad creche be a pub! Although, a few ice cold beers would be nice. And a wide screen TV on the wall…especially as the world cup approaches. I suppose some wasabi nuts wouldn’t go a miss and if space allowed it, a pool table would be a nice bonus. But just somewhere to sit and reflect. Birth can be laborious (see what I did there?) so dads need and deserve a place to relax?

I think I would be set to make a fortune from setting up a dad creche franchise. Who’s in? I must be on thin ice by now, so I’ll change my angle a little…

The semi serious point to all this, which was brought to my attention by a friend who has just recently had his baby, is this. The labour and birth will be an intense, intimate, exhausting emotional rollercoaster and after everything has calmed down, it is incredibly valuable for dad to escape for half an hour. He went to the coffee shop and sat down with a croissant and a coffee, just on his own. Quiet, peaceful and calm. His advice was that it is SO important for dads to grab a minute or 30 for themselves. Choose you window of opportunity wisely, when your partner and new baby are sleeping maybe. Be there for your partner for the duration of labour, but grab your moment to be with yourself.