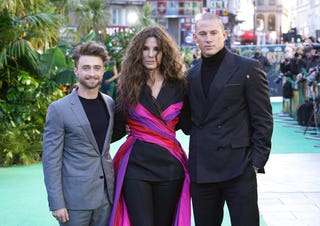 Daniel Radcliffe thanked his parents for having “the foresight all those years ago” to make him British so he could develop a “naturally evil” accent.

The Harry Potter star won the prize for best villain at the MTV Movie and TV Awards for his performance alongside Sandra Bullock and Channing Tatum in The Lost City.

He fended off competition including Colin Farrell and Willem Dafoe to scoop the award.

Radcliffe said receiving the accolade was “genuinely really, really cool” and thanked his co-stars and production team in a short virtual acceptance speech.

“If I’m being honest the thing that makes my job easiest is just being English,” he said.

“This is the universally recognised accent of pure evil… a voice that would kick a puppy, or not give Oliver Twist more food.”

“So I really should thank my parents the most for having the foresight all those years ago to have me be British so I could grow up to sound naturally evil and one day claim this award.

Radcliffe also explained that his “new haircut” and shaved eyebrow were not “personal aesthetic” choices, but for work.

Is an English accent really evil? Which is the MOST evil? Let us know in the Comments what YOU think