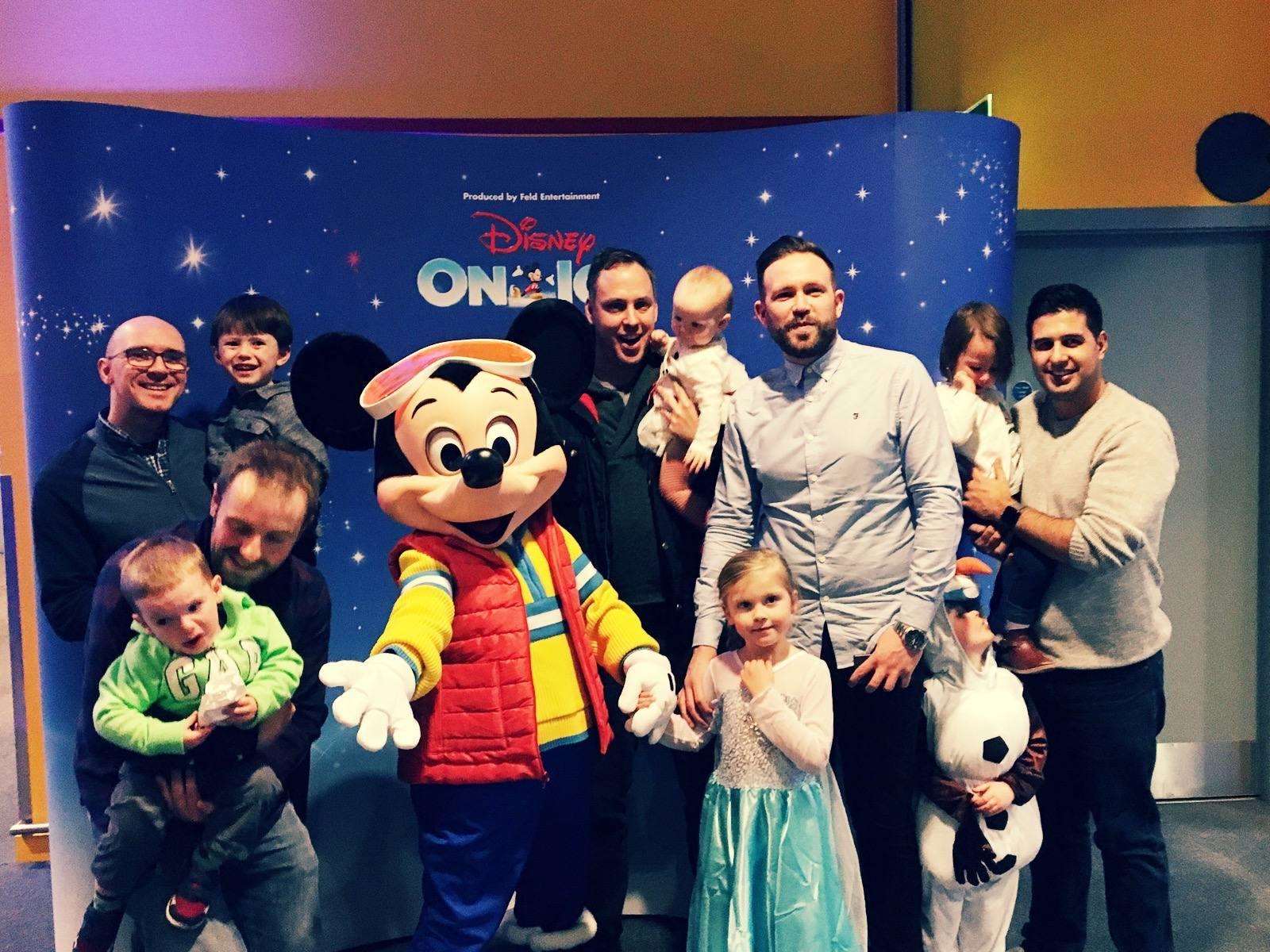 Last night 5 Dads from The Dad Network were invited to the launch of Disney on Ice Presents Frozen up in Liverpool at the Echo Arena.

From what we’ve heard, here at The Dad Network HQ, it sounds like they had a fantastic time and enjoyed singing along to ‘Let it Go’ at the top of their voices. Apparently their children joined in too. Ha! (That’s a bad dad joke isn’t it…)

Anyway, here’s what the dad’s really thought about it:

Disney being how they are, it’s very rare that any given moment could live up to the magic that their escapism provides. One such occasion happened tonight though, when I saw my three year old daughter with her hands in the air singing along to “Let It Go”. Tonight’s performance was phenomenal, the cast brought the show to life with a fluidity matched only by the original film. I even found myself singing along to the songs with her. Thanks for a great experience! 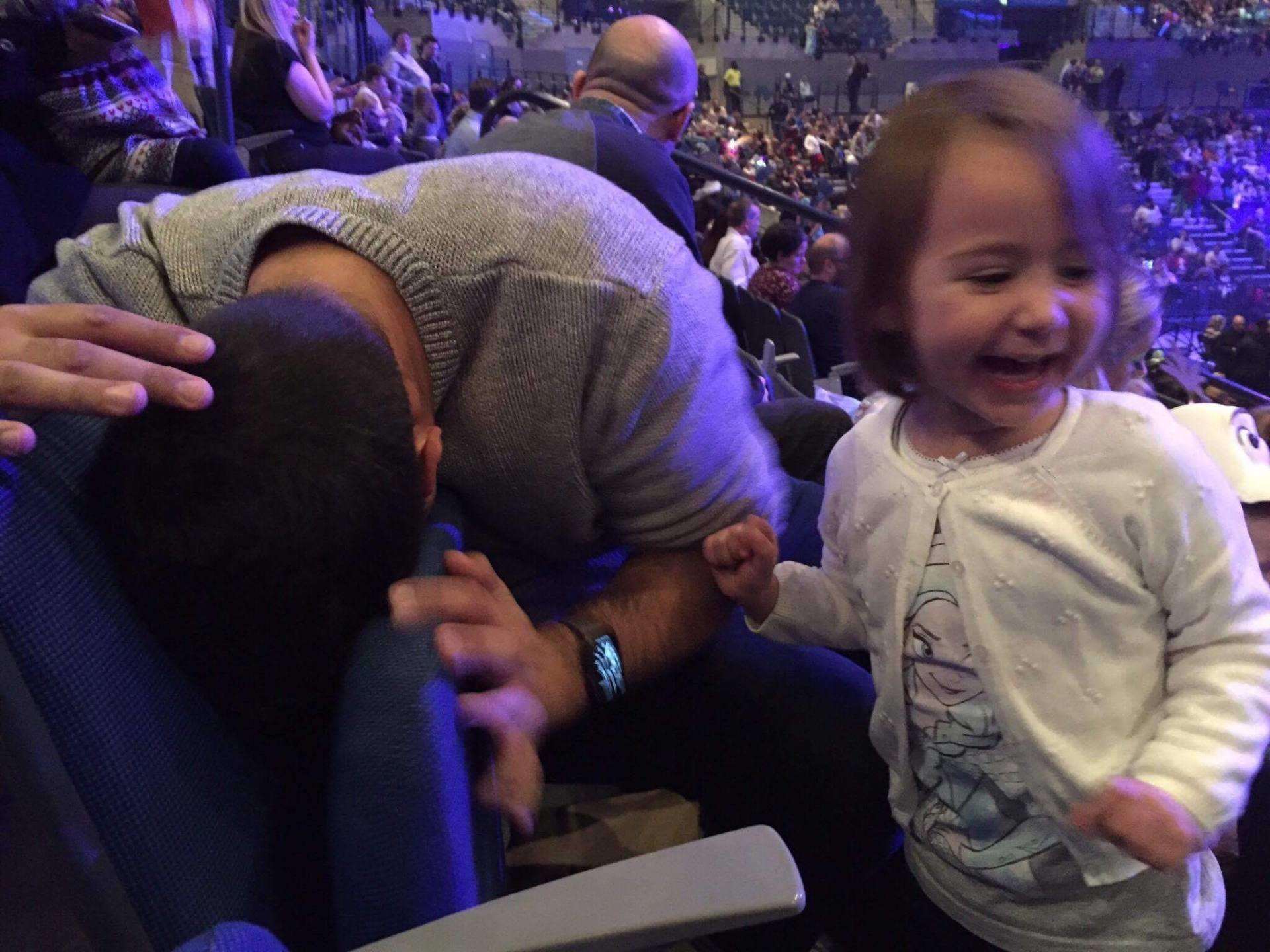 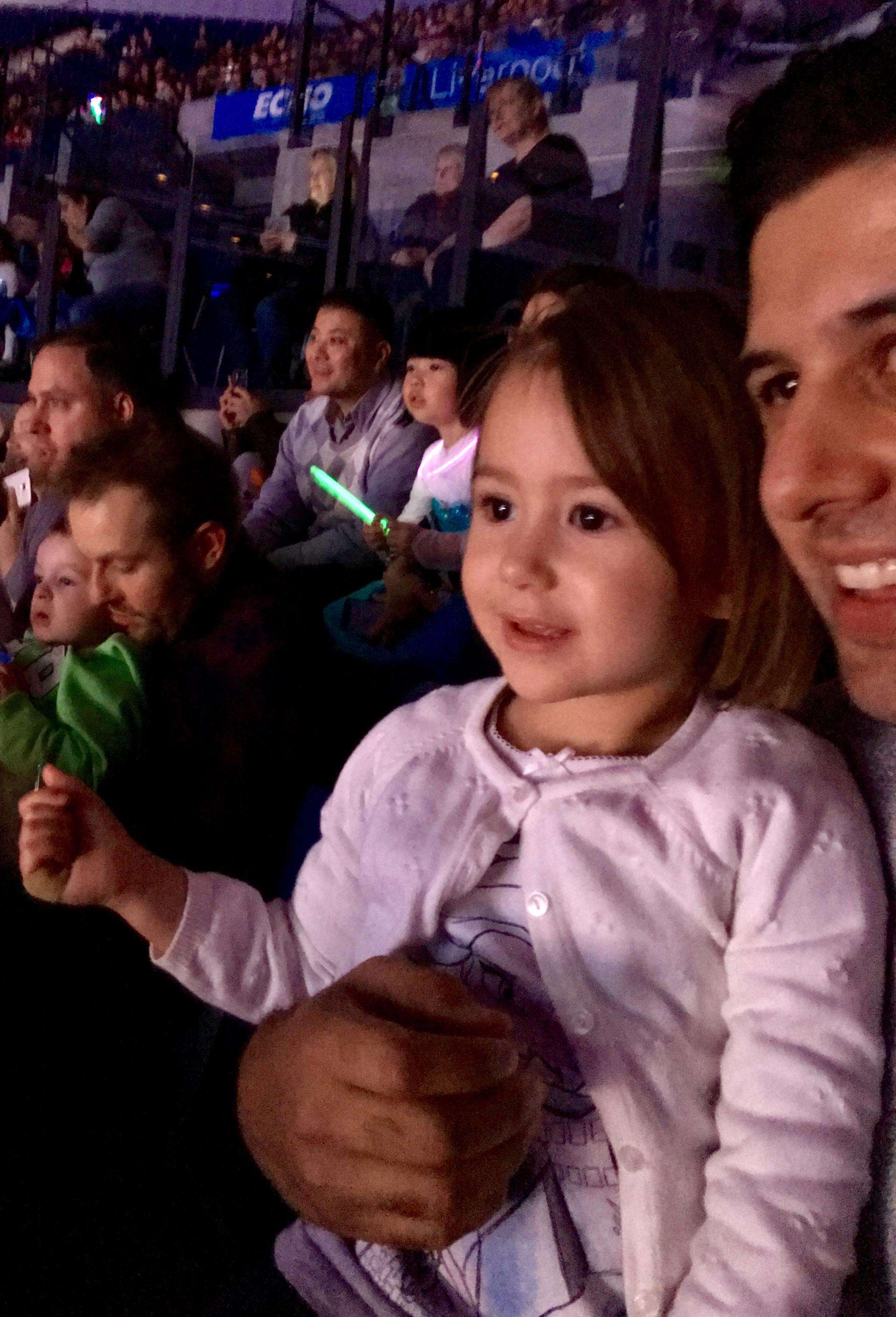 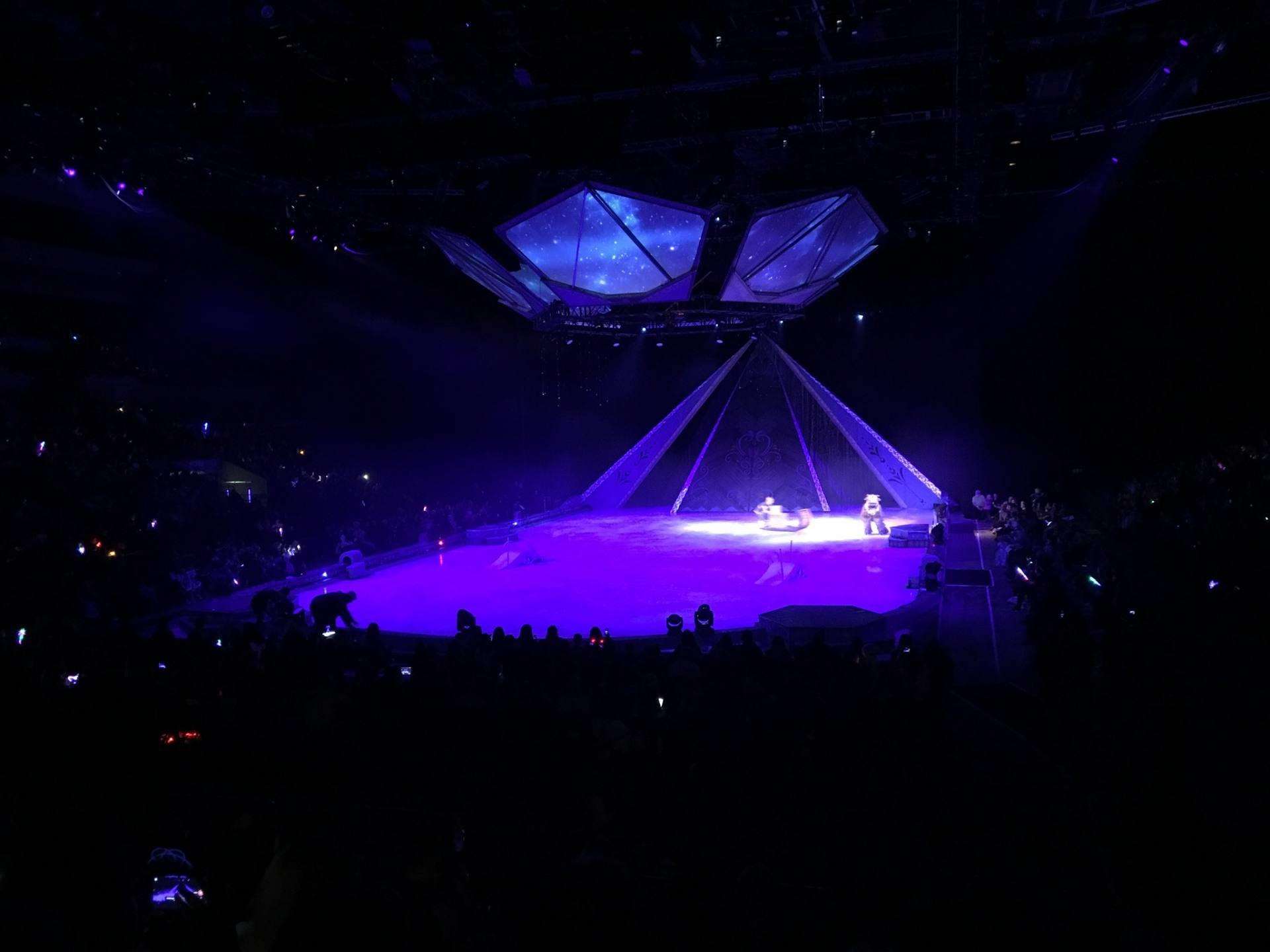 Having a teenager and a baby is very challenging especially when it comes to inclusive events that both ages will enjoy. Surprisingly, I’m not sure who enjoyed Disney on Ice more, the girls or me :) Having never been to a show on ice before I wasn’t sure what to expect at first but it was very clear from the opening sequence that there would be some amazing dancing. acting and of course the story of Frozen.
I think I may have been the only person at the Echo Arena that hadn’t seen Frozen previously and I can honestly say I was fully captivated and can now understand why it’s so popular. Either that or the cast did such an amazing job that I got taken away in a Disney whirlwind.
A must visit if you’re close to Liverpool or keep an eye out for the tour. 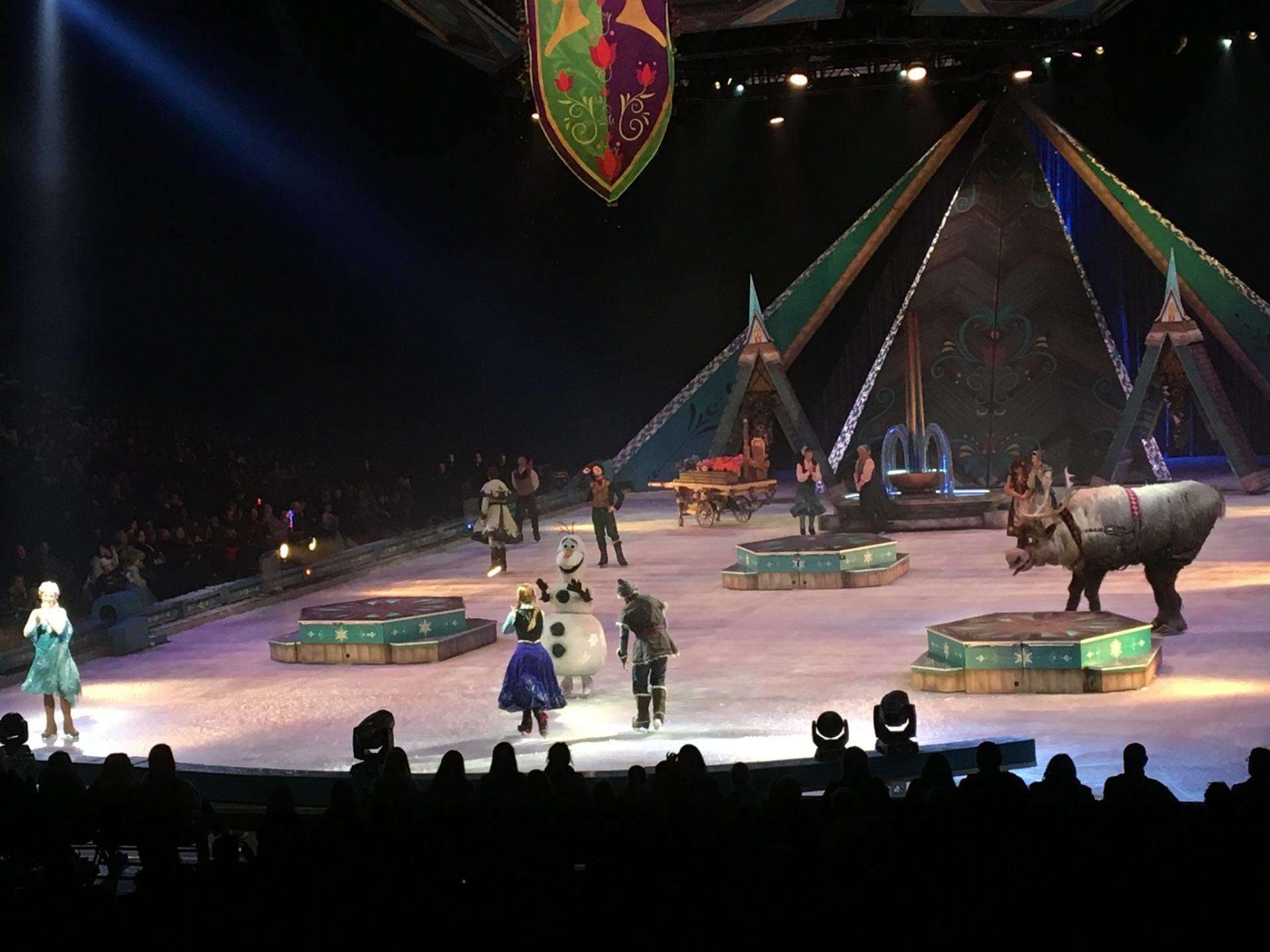 Frozen on ice was truly a magical family experience. The cast were fabulous and really captured the world of ‘Frozen’. My son was memorised with the dancers and starstruck with the special guests who also made an appearance.

The arena was a brilliant host having a great layout and very organised staff. The indoor car park was ideal; in a great location next to the arena and safe for access with the kids. Lots of restaurants close by for anyone who fancies a bite to eat before the show.

A must see for all ages, and snowmen. 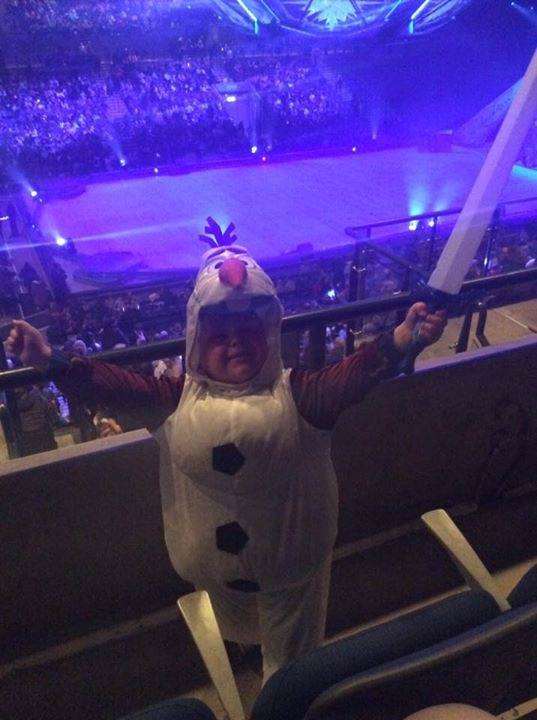 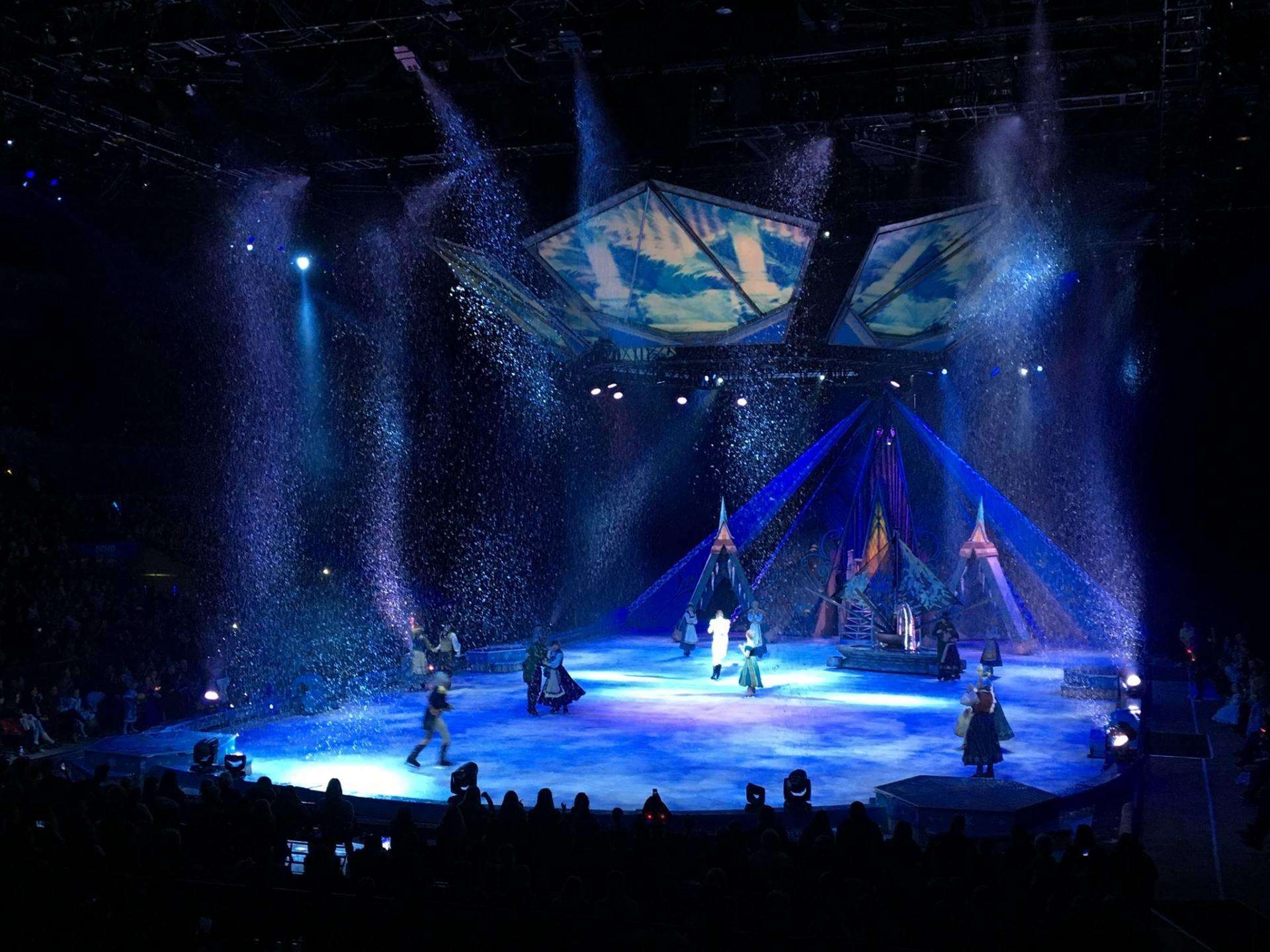 Thanks to the Dad Network, my son Isaac and myself got the chance to go to watch Disney on Ice presents Frozen at the Echo Arena in Liverpool.
What kid (or adult for that matter) doesn’t like the magic of Disney, and this didn’t disappoint on that front. When you stepped into the arena it was a wash with budding Elsas, Annas & Olafs and flashing thingamajigs being waved by excited kids.
The opening dance along with all the Disney crew was great to get people going and the costumes colours & effects were just right I think. Isaac loved the small firework effects, the skaters were great and I particularly liked the marshmallow snow monster too!
Pretty sure many of the dads couldn’t help a little sing along at one point. When I asked Isaac which bit he enjoyed the most and his answer was “all of it” so I think that was a hit, then he thanked me for a nice day so a great end to a great night I’d say.
Craig Rigby 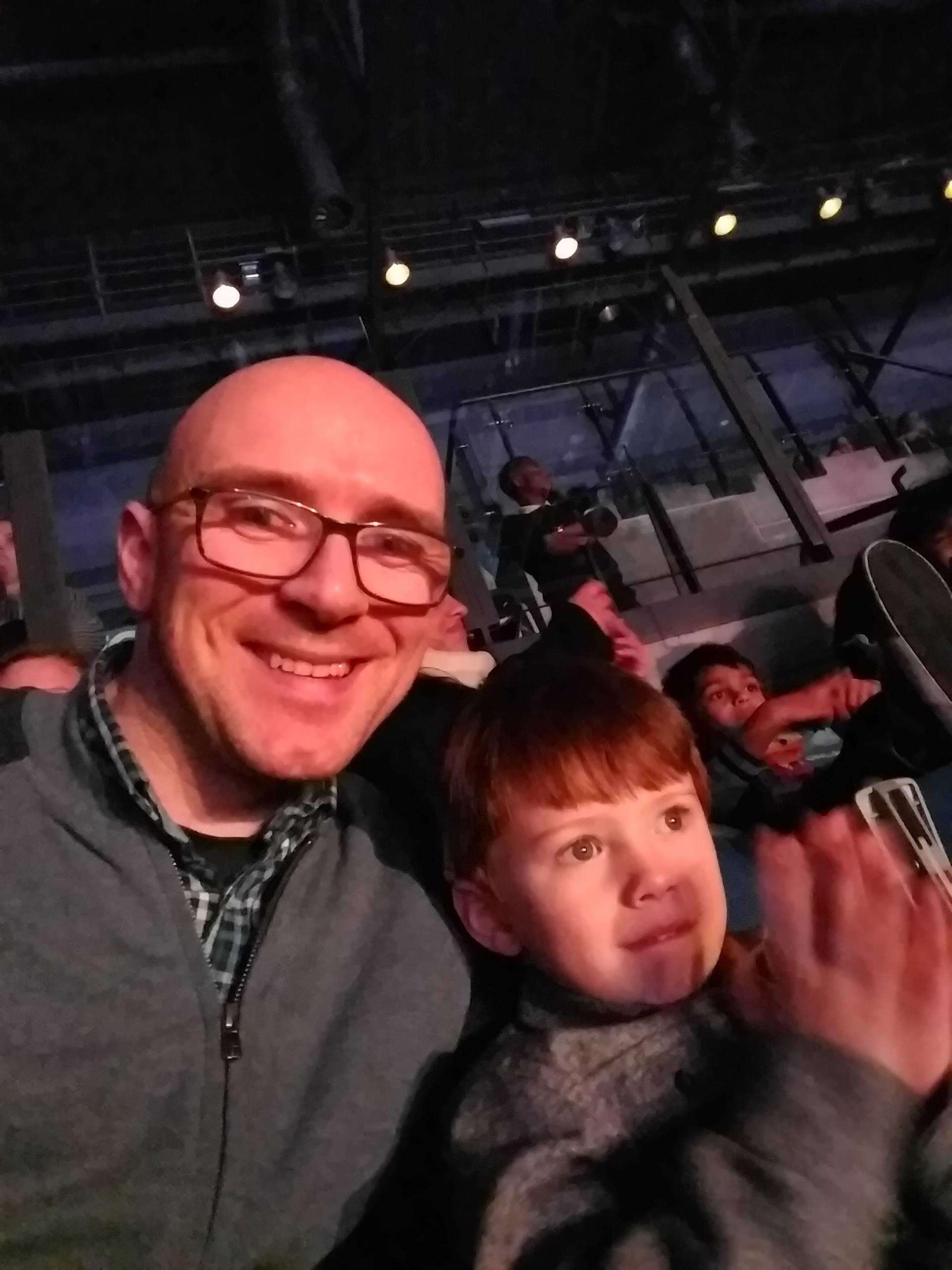 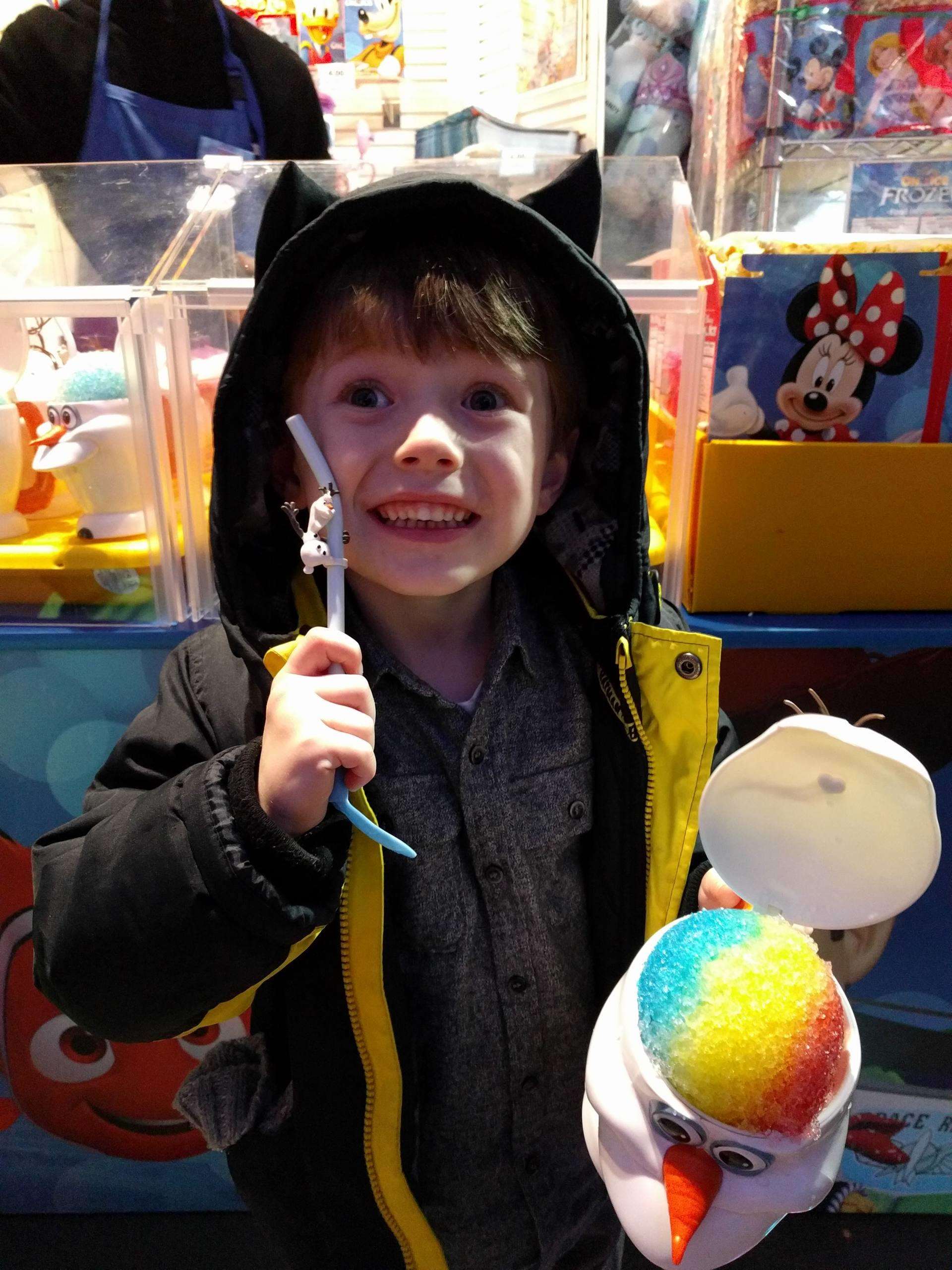 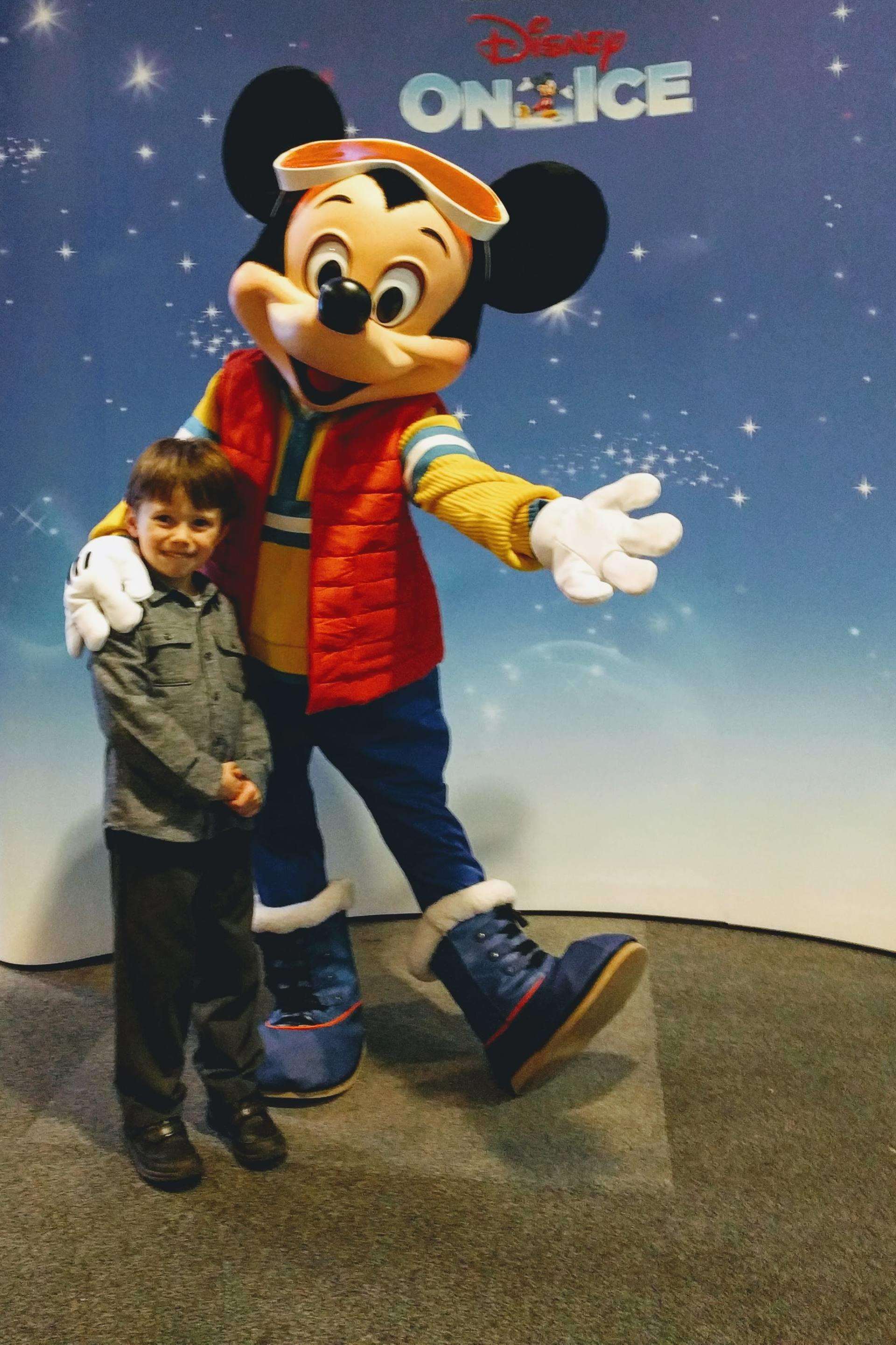 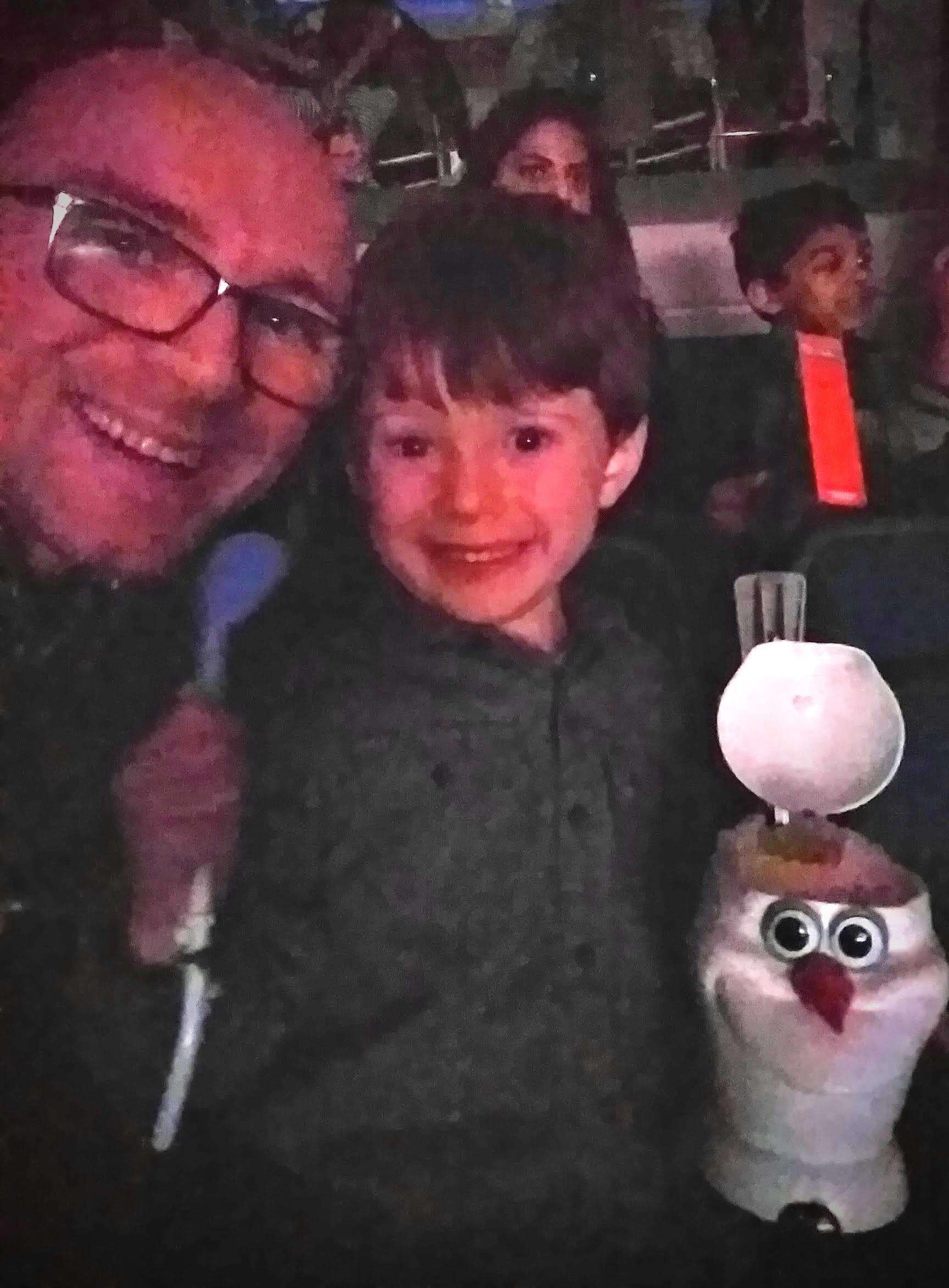 So I came late to the Frozen party, in that I saw it for the first time on Saturday, as did my little boy. I’ve avoided it like the plague, so the idea of hoards of kids heading to see frozen filled me with dread. But this opportunity from The Dad Network made me face the inevitable and gave me a wonderful opportunity to give my little boy a treat.
Last week he was made a big brother and this is the first bit of one on one time we’ve had since his sister was born and Disney didn’t disappoint! He spent the first half glued to the singing and dancing. So much that he barely ate the box of popcorn that was in front of him. The second half he was a bit more animated and started encroaching on the personal space of the girls in front as he wanted to get ever closer to the action. Bookending the performance with well known Disney characters was a nice touch too as there is always something for each child to get excited about, in our case it was Pumba/ Nemo.
Thoroughly enjoyable night, and I’ll forgive Disney the fact I can’t get the songs out of my head as he had a great night.
Tim Ingram 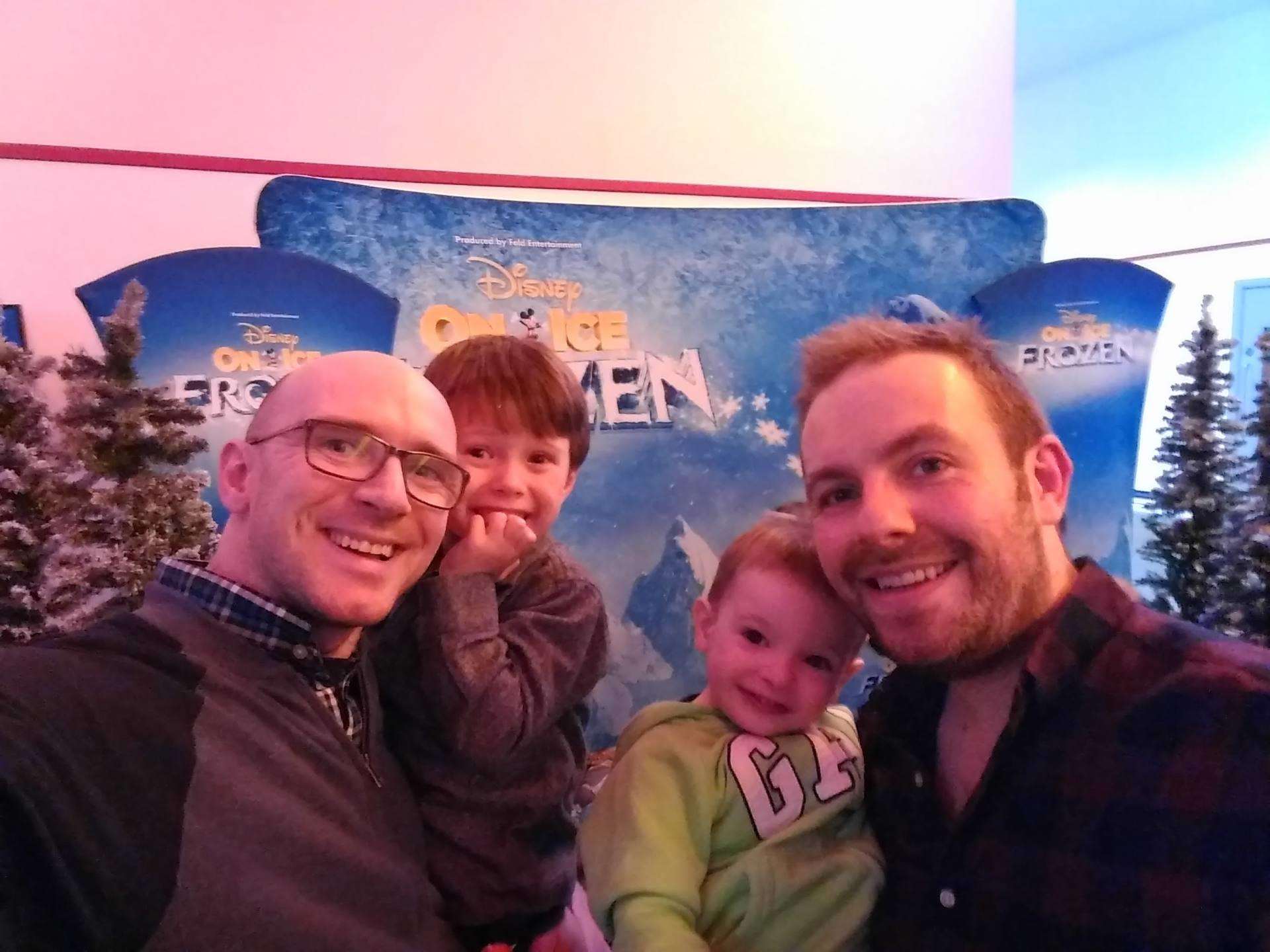 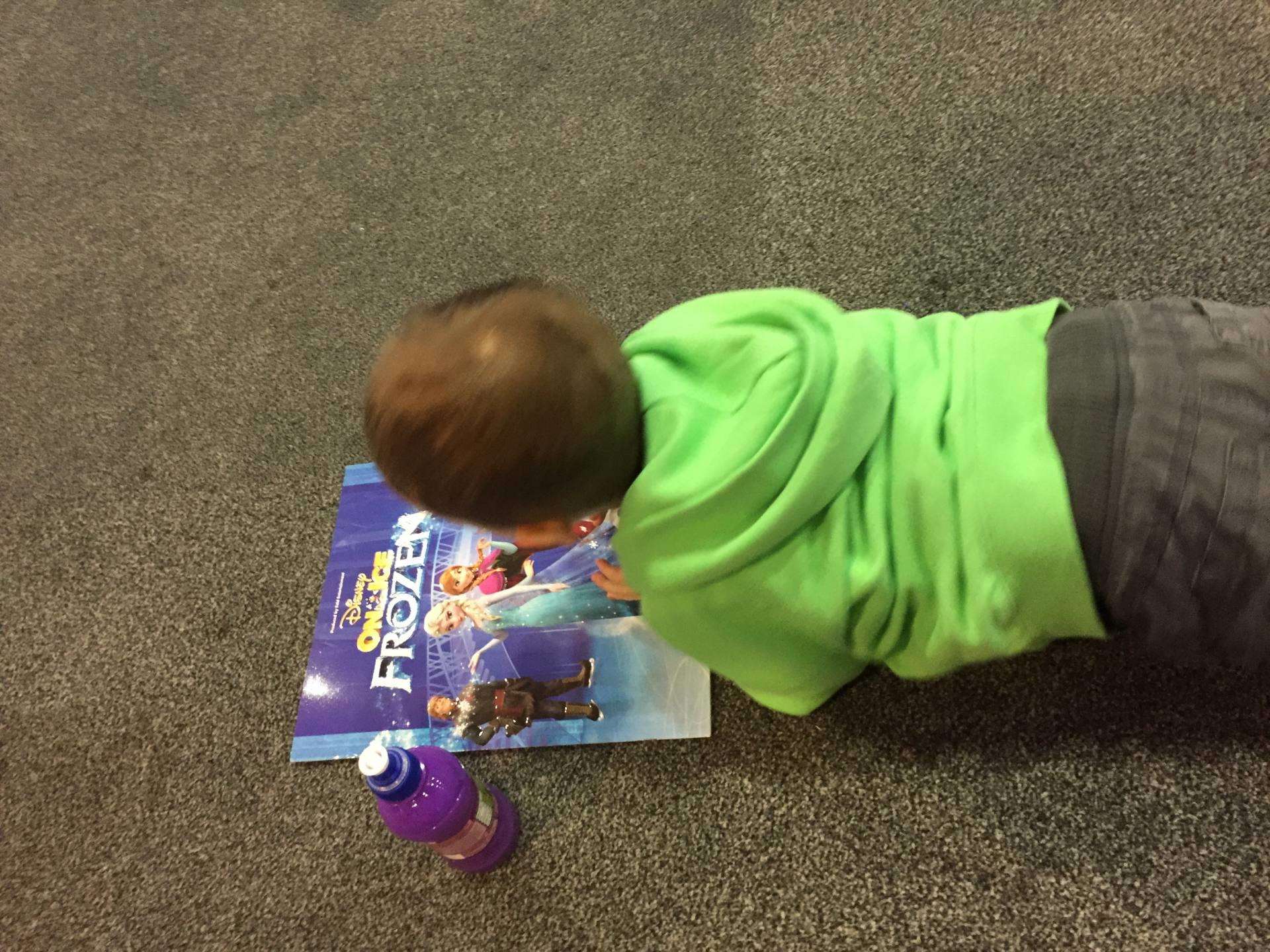 As a man who has never been one for theatre or musicals, in fact this was my first! I had definitely gone in to the evening not knowing what to expect. My daughter on the other hand is mad about anything and everything Disney and last year went to Disney on Ice with her mother so she knew just what to expect and it was hard not to get caught up in all her excitement!

The show itself started with a bang by none other than Mr & Mrs Disney themselves, AKA Mickey and Minnie Mouse and a whole host of other Disney characters which really got the crowd warmed up and ready for the main event.

The main production, which is a condensed version of the Frozen movie was really done very well and much to the pleasure of my daughter featured all the major scenes and characters from the movie. The performers were all excellent skaters and the costumes were just like you remembered them from the movie itself!

In summary, it was a thoroughly enjoyable and memorable show that featured Kristoff doing backflips, an ice-skating reindeer (Sven), a group of singing and dancing Trolls and even an enormous remote controlled inflatable snow-monster! Oh and not to forget all the special effects and artificial snow!

Definitely made a convert out of me anyway. 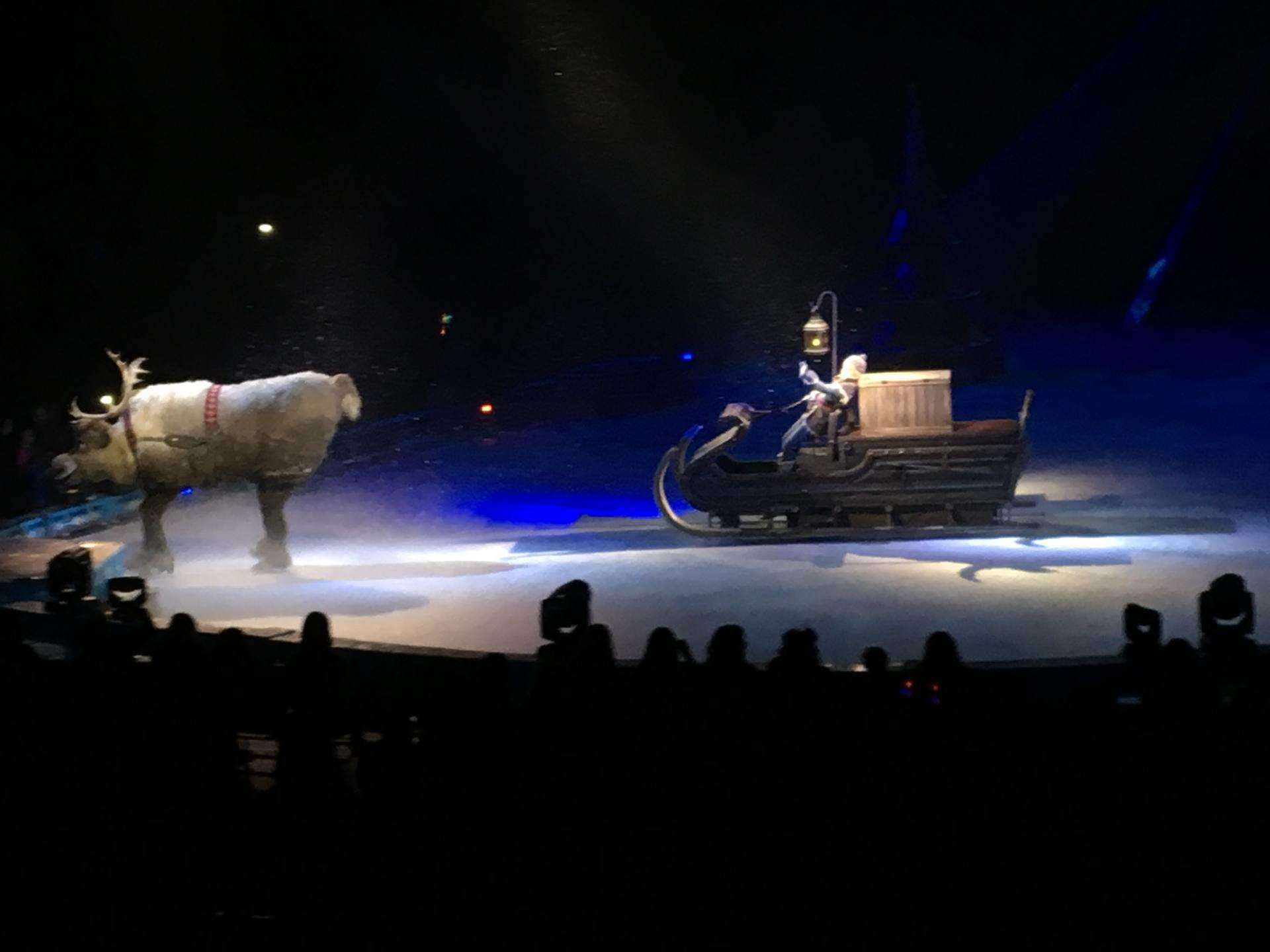 That sounds and looks to me like if you get the opportunity to go and see Disney on Ice Presents Frozen, you should snap it up as quickly as possible.