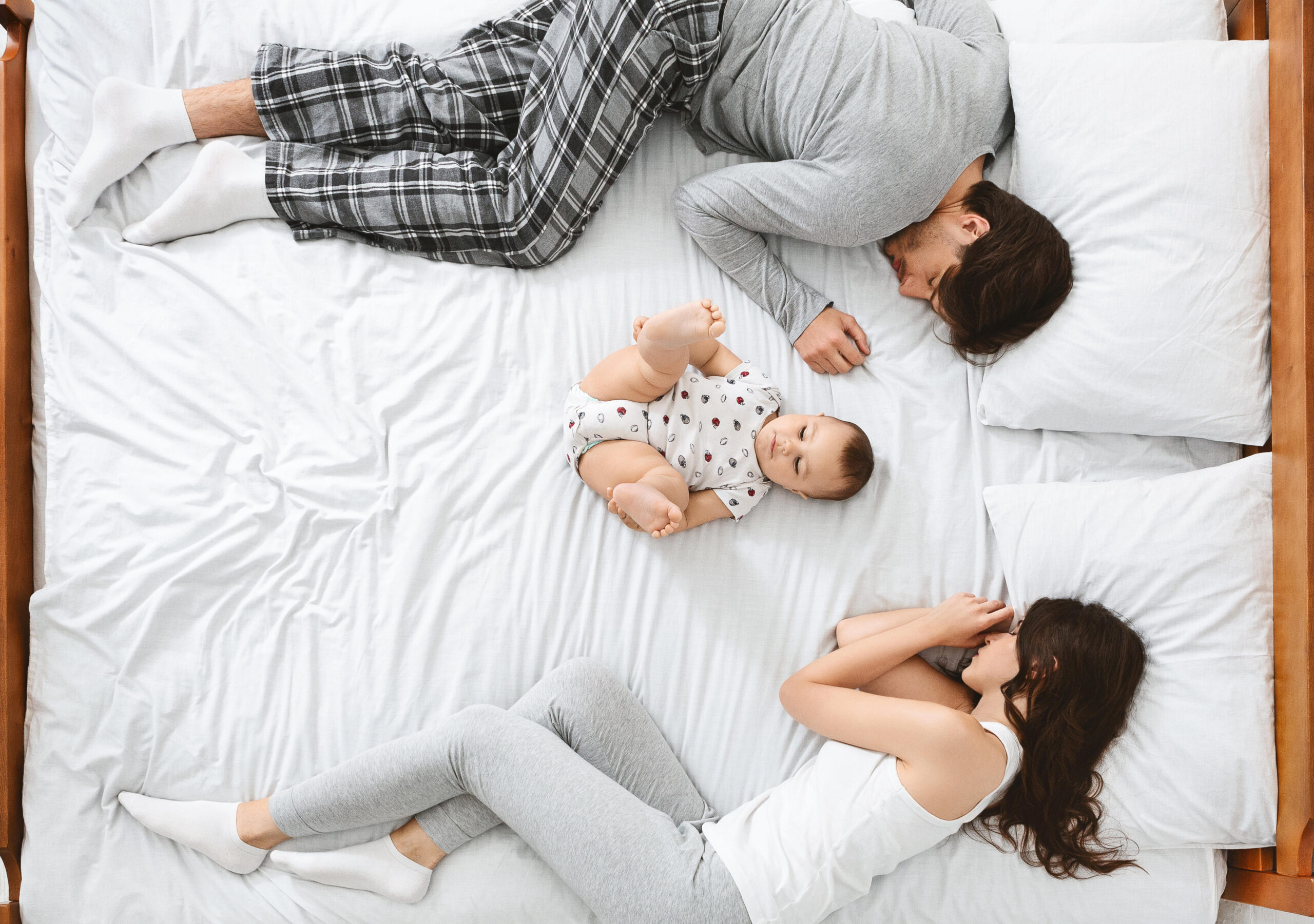 “You have a concept of what not having sleep is like – but actually the reality of it is absolutely stark,”

We’re bombarded with messages that sleep is vital for our physical and mental health. Sleep allows the brain to process information, the body to recover from the day, our heart rate and breathing to slow down and hormones to regulate, among other things – all of which sound pretty crucial to our survival. So if you’re a new parent – or a parent or carer to a young child with sleep problems – that messaging can make you feel quite powerless.

“Sleep while you still can,” everyone told me, well-meaningly, before I had a baby. We’re conditioned to understand that ‘newborn equals tiredness’, so of course everyone expects multiple night-time waking and early mornings. At least at first. I didn’t really expect not to have a full night’s sleep for almost a year though – and the impact that would have.

“The lack of sleep can be a huge surprise when you have a new baby, and you never know what it’s going to feel like until it happens,” says Lucy Shrimpton, sleep expert and founder of The Sleep Nanny (sleepnanny.co.uk).  “It is another level of tiredness and can be a huge shock to the system for all new parents.”

“You have a concept of what not having sleep is like – but actually the reality of it is absolutely stark,” adds Dr Nihara Krause

There are also huge variations in the ways babies sleep, and how they sleep – through illness, sleep regressions and developmental stages – can change along the way.

What’s the impact on health?

While in the short-term, deficient sleep is likely to make you irritable, lack focus and affect your mood. Krause says: “Long term, new parents are at risk of increased anxiety, depression, general fatigue [and] burnout. If you have a vulnerability to postpartum depression then it can highlight that. If you have a prenatal history of mental ill health then that can be very sensitive to long-term sleep deprivation.”

The problem is often a lack of REM sleep – the deepest kind – because many new parents tend to sleep much more lightly than before, because they’re so aware of the tiny human now present, who will inevitably need them soon.

“It’s just not refreshing sleep,” says Krause. “You’re not going to process things in the best possible way, your reflexes might be slower, your memory might be disrupted (because a lot of our short-term to long-term memory storage happen during sleep). It can also have a physical impact in terms of more likelihood of lower immunity and delayed repair.”

“Sleep deprivation is used as a form of torture and there’s reason for that,” notes Shrimpton, “it makes you operate from a place that would be measured as insane – where you’re totally irrational.” Any less than five hours of sleep in 24 hours, broken or otherwise, is far too little to operate on psychologically, she says.

There’s an additional mental torment in not knowing when your baby’s (and therefore your) sleep might improve too. The impact of that particular unknown is “huge”, says Shrimpton.

“When you’re in it as a parent and your baby is four months old, you do momentarily think, ‘This is my life now’. You don’t have a grasp on the fact that in a few weeks or a few months time, you’ll be in another place. You see the here and now and the pain that you’re in.”

Psychologically, I could cope with very small – or even no – improvements in sleep, night on night. But when setbacks occurred, it was particularly challenging mentally. I began to dread night-times – not an uncommon feeling among new parents – and sleep became a bit of an obsession, a far off all-problem-solving elixir.

“One of the most difficult things is the unknown,” agrees Krause. “We all experienced it a little bit when we went through the pandemic, but the unknown is something that is almost hard-wired into our brain to be seen as us under threat and its dangerous. So when you don’t know when you might get some normality, or what the new normal might be, what that does is create an increased sense of anxiety.

“If the unknown goes on for a long time, people can start to feel really helpless, kind of losing their confidence and [feeling] a bit beaten by the situation, which is the last thing you want when you’re a new parent. With time, that can lead to depression.”

Can sleep deprivation do permanent damage?


It all sounds pretty dire in the short to medium-term, but does it do any permanent damage, even when you finally start to get a full night again?

“It will go back to normal,” reassures Krause.

“I do think that, ultimately, our bodies and brains are absolutely wired to protect – survival really does come into play. So while the anxiety will say, ‘I’ll die if I don’t get enough sleep’, if you really don’t have enough sleep, your body will be forced to do a sort of catch-up sleep at some point.

“Somehow, your body will grab what is needed, and I think it’s absolutely important that parents don’t get over-anxious about the lack of sleep – it might make you feel out of control, but that doesn’t mean you will go out of control.”

What can actually help?


By six to eight months, some parents choose to enlist professional help for tricky sleeping, if they have the budget, although there are never any guarantees.

Krause acknowledges the ‘sleep when the baby sleeps’ advice is “really irritating – because it’s not that easy”. Between work, other children, additional responsibilities, and babies who contact-nap (on you), often it’s just not possible. But, she says, “a nap here and there really helps, even 10-15 minutes seems to help a tiny bit, [even though] we might still feel groggy and irritable.”

Shrimpton says: “Don’t put pressure on yourself to sleep. If you can just put your feet up and rest, put your phone away, don’t read anything, don’t do anything physical, just listen to some music or meditate and that will make a huge difference.”

Asking for help is crucial though. “There’s something about new parenthood and thinking, ‘I can’t [get help] because people will think I’m not a good enough mum or dad’,” Krause says. But we don’t have to do it all ourselves – particularly on very little sleep. We’re almost conditioned to exude a picture of total control (and blissful happiness) as new parents, and that’s not realistic – or healthy.

Try a shift-like pattern with your partner too, and pump or mix feed if needed. Shrimpton suggests “two nights on, two nights off – that’s better than alternating, as you get proper rest that way and you recover”.

It can also be helpful to reassess how you see your own time – at least in the short-term. You might be used to evenings being ‘your time’ but you could use them to sleep instead. So go to bed at 7pm if you can.

Krause advises analysing what’s actually disrupting your sleep. “You may just have a baby who is really demanding and gets up constantly and there’s no way around it, but sometimes sleep is disrupted because you are anticipating the baby crying, and sort of waking yourself up in your diligence. So how might you find a way to go with the flow a little more?

“Are you worried about the safety of the baby? How might you reassure yourself before you go to sleep that the baby is safe? If you struggle to fall back to sleep after a night-time feed, think about what you can do as a bit more of a routine,” adds Krause. “Personalise it so that you are then addressing your own concerns, alongside the needs of the baby.”

How much sleep are you getting as a parent?  Let us know your worst night’s sleep in the comment section below.