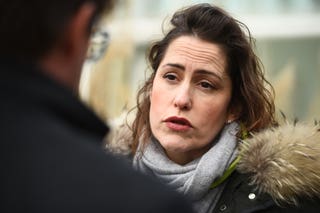 The Government has not ruled out extending the school day to help children prosper after the coronavirus pandemic, a minister has said, as she defended as “huge” the investment in recovery plans in the wake of the resignation of a key adviser.

Schools catch-up tsar Sir Kevan Collins quit with a stinging condemnation of the Government’s £1.4 billion education recovery fund on Wednesday, which he said “falls far short of what is needed” to meet the scale of the challenge.

But Home Office minister Victoria Atkins said she had not read his resignation statement and disputed that he was alleging those worst affected by the pandemic in the North and disadvantaged areas had been failed by plans.

In his statement on Wednesday, Sir Kevan said: “In parts of the country where schools were closed for longer, such as the North, the impact of low skills on productivity is likely to be particularly severe.

“The pandemic has affected all pupils but hit disadvantaged children the hardest.”

But when asked about that point on Sky News, Ms Atkins said: “Well, I haven’t read his statement.

“I’m not sure that was quite the point he was making at that point, if I may say so.”

“But what I’m saying is the point about targeting those children who are most affected by the pandemic is absolutely what this money is about.”

And she said the education recovery fund was “very much focused on what we can deliver and deliver quickly”, despite Sir Kevan citing in his resignation statement that the package of support is “too narrow, too small and will be delivered too slowly”.

The DfE’s programme includes £1 billion to support up to six million, 15-hour tutoring courses for disadvantaged pupils, as well as an expansion of the 16-19 tuition fund.

It has been previously reported Sir Kevan called for £15 billion of funding and 100 extra hours of teaching per pupil, rather than the £1.4 billion additional fund announced by the Government.

The announcement, made during half-term, does not include plans to lengthen the school day or shorten the summer break.

Sir Kevan had recommended that schools and colleges should be funded for a flexible extension to school time, the equivalent to 30 minutes extra every day, as part of his long-term plans.

But Ms Atkins said the Government was still considering the proposal.

On Wednesday, Boris Johnson asked a group of pupils visiting Downing Street whether they would like to see the school day extended.

And Ms Atkins told the Today programme: “We are reviewing this recommendation about extending the school day.”

The PM said “of course there’s going to be more coming down the track” to support schoolchildren.

But senior Tory MP Robert Halfon said the Government must “decide their priorities in terms of education” and that the Treasury can “find the money from the back of the sofa”, where there is the political will.

“So where there is the political will, the Treasury can find the money from the back of the sofa, and there has to be that political will because we need a long-term plan for education, a proper funding settlement.”

While former children’s commissioner for England Anne Longfield told BBC Breakfast: “We’ve seen in other areas of course spending has needed to happen during the pandemic.

“None of us would say that wasn’t money well spent, but somehow when it gets to children and education there’s so many hoops that need to be jumped through.

“I think what the Government has been exposed as having done is not prioritising children’s education, not prioritising the wellbeing of children, and this is the Chancellor’s responsibility for not putting the funding forward.”

He said the funding from the plans should come from “Covid reserves”.

On Wednesday Education Secretary Gavin Williamson sidestepped questions about reports of a row with the Treasury over the funding, but he did admit “there will be more that is required”.

Asked whether Mr Williamson should carry on in his post if reports he had been overruled on catch-up funding were correct, Ms Atkins said: “What I do know is that Gavin is absolutely committed to giving every single child in this country the very best start that we can.”

A Number 10 spokeswoman said: “The Prime Minister is hugely grateful to Sir Kevan for his work in helping pupils catch up and recover from the effects of the pandemic.

“The Government will continue to focus on education recovery and making sure no child is left behind with their learning, with over £3 billion committed for catch-up so far.”