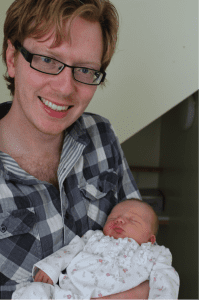 Our first daughter was born on 1st August 2012.  She was a week and a half early and despite a long labour everything went naturally and safely.  Baby was healthy, Mummy was well and we quickly settled into our new lives as a family.

Life was as you would have hoped as a new parent.  Our daughter got settled into breastfeeding without too much trouble, she slept well and Mum was healing nicely following the birth.

This idyllic bliss however abruptly came to an end when our baby was 3 weeks old.  One evening, without any previous warnings she started to cry.  As time rolled on the crying gave way to screaming and settled in for the next 18 weeks.  Colic had settled in!

Our beautiful baby, who had just joined us and made our world new again had now begun screaming uncontrollably.  We were at a loss.  We did of course take her to the doctors who referred us to the hospital who ran tests, kept us in for observations and came up with nothing several times.  All the professionals could offer us was a diagnosis of colic.  They were all amazingly kind and helpful, but there was nothing to be done to help.

Failing traditional methods and looking for any possible option that could help ease her pain we also visited a Cranial Osteopathy locally who was also unable to help.  They did in fact add to our concerns by commenting that it was the worst case of colic they had ever seen.

For any of you that haven’t heard of colic yet it is a phenomenon in some babies that results in them crying/screaming uncontrollably.  They cannot be soothed and no one knows what causes it.

Before having children it was something we had not heard of.  We’d done the classes and read the books but none of them had mentioned colic to us.  Over time it became apparent that this wasn’t because it is uncommon, lots of our friends were told at some point that their babies were also colicy.  It felt as though as no one knew what it was or how to combat it it is best hidden from new or soon to be parents.

The 18 weeks of screaming pushed my wife and I hard.  Both of us at various points broke down into tears as a result of our daughter’s suffering.  I have never before felt so helpless as I did watching my tiny baby scream and writhe around in pain with nothing to offer her to help.  I was desperate to take to pain away but there was nothing to do but wait.  Wait for the mysterious colic to do what it does and then move on.  That wait proved to be incredibly hard to bear.

But once she was 21 weeks old it stopped.  Life became easier.  Our daughter became happier and now that she’s 2 there is no sign that anything had ever been wrong.  Our life as a happy new family could get underway again.

I wanted to write this not to boast about the difficulties that we had nor offer much in the way of advice to people suffering as there is nothing that I could write here that would comfort any parent holding and watching their baby suffer.  But I did want to highlight the fact that whatever it is, colic does affect people.  It is awful.  There are plenty of other people out there who are also suffering.  But it does pass.  Do whatever you can do to help yourself, your partner, your baby and the rest of your family cope with the pain of it.  Look after one another as best you can and in time things will improve.
Bio: Hi. I’m Tom, I live in Worcestershire with my beautiful wife and 2 daughters.
By day (term time) I’m a Primary school teacher, which I love, and when I’m not at work I’m a Dad; playing with my daughters, baking, drawing, playing video games and watching movies.