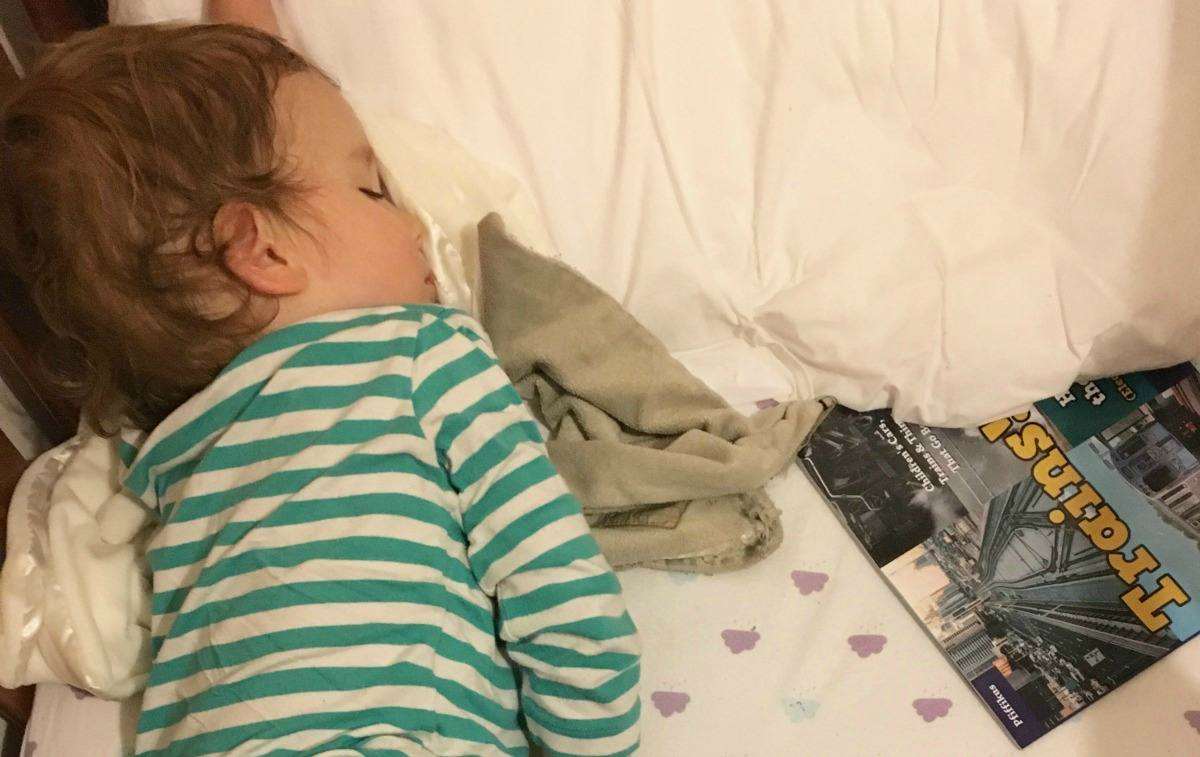 When Teddy was 7 months old I came home from work and found Jen, my wife, in tears. She was still in her pyjamas from the night before and hadn’t yet managed to take a shower. The reason being – our beautiful baby boy didn’t/wouldn’t/couldn’t sleep and the sleep deprivation was slowly ruining us!

Ted was the perfect baby during the day. Happy, smiley, content but at night he wanted two things – his mummy and boobs!

At 7 months Ted was feeding every hour and the sleep deprivation had hit us so hard that I just knew we had to do something. We turned to the UK’s leading sleep expert, Jo Tantum, for help.

The results were incredible and within 10 days Teddy was sleeping through the night.

We spent many months basking in our new-found energy levels and thoroughly enjoyed all the evenings we were now able to spend together. Our baby slept! Like other babies! We were overjoyed and felt like the luckiest parents on earth.

Then a few major things hit us in quick succession. Jen suffered a miscarriage at 12 weeks and both of our emotions were high. Teddy became extremely ill with some form of gastroenteritis and after two weeks of severe sickness and very little sleeping he was admitted in to hospital over night. Jen then suffered three more heart-breaking miscarriages and Teddy hit his head very badly and suffered multiple seizures. After his accident he didn’t want to leave Jen’s side and Jen didn’t want to leave his side either. They both became very dependent on one another and bedtimes quickly went downhill. The bedtime routine slipped little by little and slowly but surely we were right back to where we were when Teddy was a baby.

A typical night for night for us saw Ted in bed for 7pm with lights out. He would then call us back in to him for a million and one reasons; he was too hot (he wasn’t), he was too cold (he wasn’t), he couldn’t find his water bottle (he could), he lost his blanky ( he hadn’t), and so it went on.

This constant in and out went on for two and a half hours before finally around 9.30pm he would fall asleep exhausted. Jen would then go straight to bed too meaning we had no time together in the evenings. This very quickly started affecting our relationship as time together is so, so important to us both.

That was an average night. The bad night saw him up for stretches of 2-4 hours.

We were in an absolute mess. We had no idea what to do and had tried everything we could think of. We both felt like utterly useless parents. Ted was two and a half and only sleeping a few hours at a time. We were forever being contacted by people telling us all about their 7-7 babies and we just couldn’t understand why we were in such a different situation to them. We felt like we had the worst 2 and a half year old sleeper in the world and blamed ourselves and each other!!

When the sleep deprivation meant Jen and Ted were both regularly in tears during the day again we knew we couldn’t take any more and we contacted Jo, for the second time, in desperation.

Jo suggested we keep a record of his sleep pattern for a few days. That way we would be able to give her the full picture of what was happening each evening. When you’ve had next to no sleep it is hard to recall the exact timings of things so a sleep diary is a really good idea.

Jo offers many different sleep advice packages but we opted for the skype call option. We went through our sleep diary with Jo and she told us the key reasons she could see for Ted’s poor sleeping.

After a 30 minute chat with Jo we had devised a new bed time plan for Ted.

We made a pact that we would both put 100% effort in to the plan and stick to it no matter what. Jo gave us the confidence to believe we could do it and she also gave us the knowledge to understand what Teddy was doing and why and the reasons we needed to be strong enough to make the changes. Teddy needed a good night’s sleep as much as we did and we had to be strong for his sake as well as hours.

We made sure we had everything we needed in place and implemented the plan as soon as we could.

The first night Ted was asleep by 7.30! 2 hours earlier than normal. We both sat downstairs with a glass of Prosecco in shock.

He didn’t wake up AT ALL during the night.

The second night was exactly the same and 9 days later we are starting to relax and allow ourselves to believe that, with Jo’s help, we might have cracked it. He is always asleep by 7.30 and only wakes if he can’t find his comfort blanket. Morning wake-ups are anywhere between 6 and 6.30am.

Ted is much happier during the day. The full nights sleep means he wakes refreshed and full of energy for the day ahead. He gets much less upset by the little things and has a new found confidence. The difference is remarkable. But hes now getting double the hours sleep he was previously so he must feel like a new boy!

In two and a half years we have turned to Jo twice for help. Both times in pretty dire circumstances. And yet she helped us get back on track, quickly, and all without tears. No tears from Ted and no tears from Mummy and Daddy!

We cannot believe how out of control bedtime had become. Or how quickly implementing the new routine worked for Ted. We feel so grateful to Jo for her advice and feel incredibly lucky that we are all now able to get a full nights sleep.

If anyone is having difficulty with sleep routines or suffering from the hell that is sleep deprivation then we strongly recommend getting in touch with Jo.She also has a Toddler Expert-Sarah on her site too.Both Jo and Sarah’s programs are personalised to meet the needs of the individual child and follow a gentle but structured approached. She’s had 100% success rate with our Ted and we couldn’t be any more grateful for the help that we received.

You can contact Jo via any of the following –