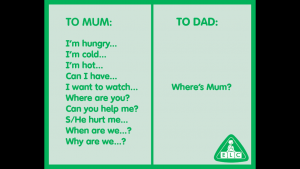 Last night the wife leans over and says, “look at this.” She shows me the picture you can see above. I looked a little closer and then realised that it had actually been made, posted and shared by The Early Learning Centre (ELC). I was horrified.

Yes, we get the joke. Ha ha… but it’s exactly this kind of thing that dads are constantly up against. And this time it’s from, arguably, the UK’s biggest baby / children’s toy shops. Unbelievable.

I wonder what would have happened if it had been the other way round. Something like this maybe:

Can you fold the pushchair down…?
Can you put the car seat in…?
Can you pack the car for the holiday…?
Can you change the oil for the car…?
I need my cot put together…?
How do you play football…?
I’m stuck on the computer…?
How do you drive…?
I’d like a shelf in my nursery…?

The world would have gone mad at them with petitions and demands asking for the CEO’s head to be on the chopping block – but because it’s about dads… it’s ok! 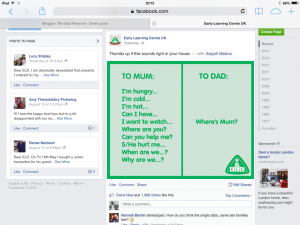 The Early Learning Centre ask, in this post, whether this “sounds right in your house.” Maybe it is the case, maybe it isn’t. To me that isn’t the point; it’s the fact that it’s a public display of discriminative stereotyping when (a lot) of dads are doing their best for their children. Human beings have strengths and weaknesses that are not dependant upon sex.

And what about single parents? Or same sex parents?

My issue is that it makes implications that dads can’t be arsed and just point their children to their mum. That just isn’t the case anymore, and until things like this are stopped, we’ll continue to have Batman and Robin climbing the houses of parliament. I fear that as long as large companies like ELC continue to pull publicity stunts like this, dads will A) continue to get a bad name for being uninterested, lazy fathers and B) encourage fathers to be uninterested and lazy. It’s an ongoing uphill battle to promote the importance of the role of fathers within family life when massive corporations make 2 clicks and spread these kind of things all over the web.

If the ELC wanted to push buttons to cause some controversy, then they have succeeded. On Facebook, it really did split opinion with people agreeing and people renouncing it. I looked a little closer into the Facebook post and found some of the ‘renouncers’ comments. Here’s my favourite:

I’m sure that ELC wouldn’t say they encourage this model of parenting and that they were just asking opinion, but I believe they wanted to cause a stir. Well, this dad is stirred up, irritated and saddened that someone as influential as ELC would post this. Instead of wasting time on social media with this, perhaps ELC could start a campaign to promote fathers?

…Guess that’d cost too much money, time and effort to the suits that sit in a large office somewhere counting £50’s.


(Here’s a link to their website if you want to see some ‘outdated’ toys: http://www.elc.co.uk)


*Mind you, what else should we be expecting from a company who’s ‘parent’ is MOTHERcare?*