I am an Ironman 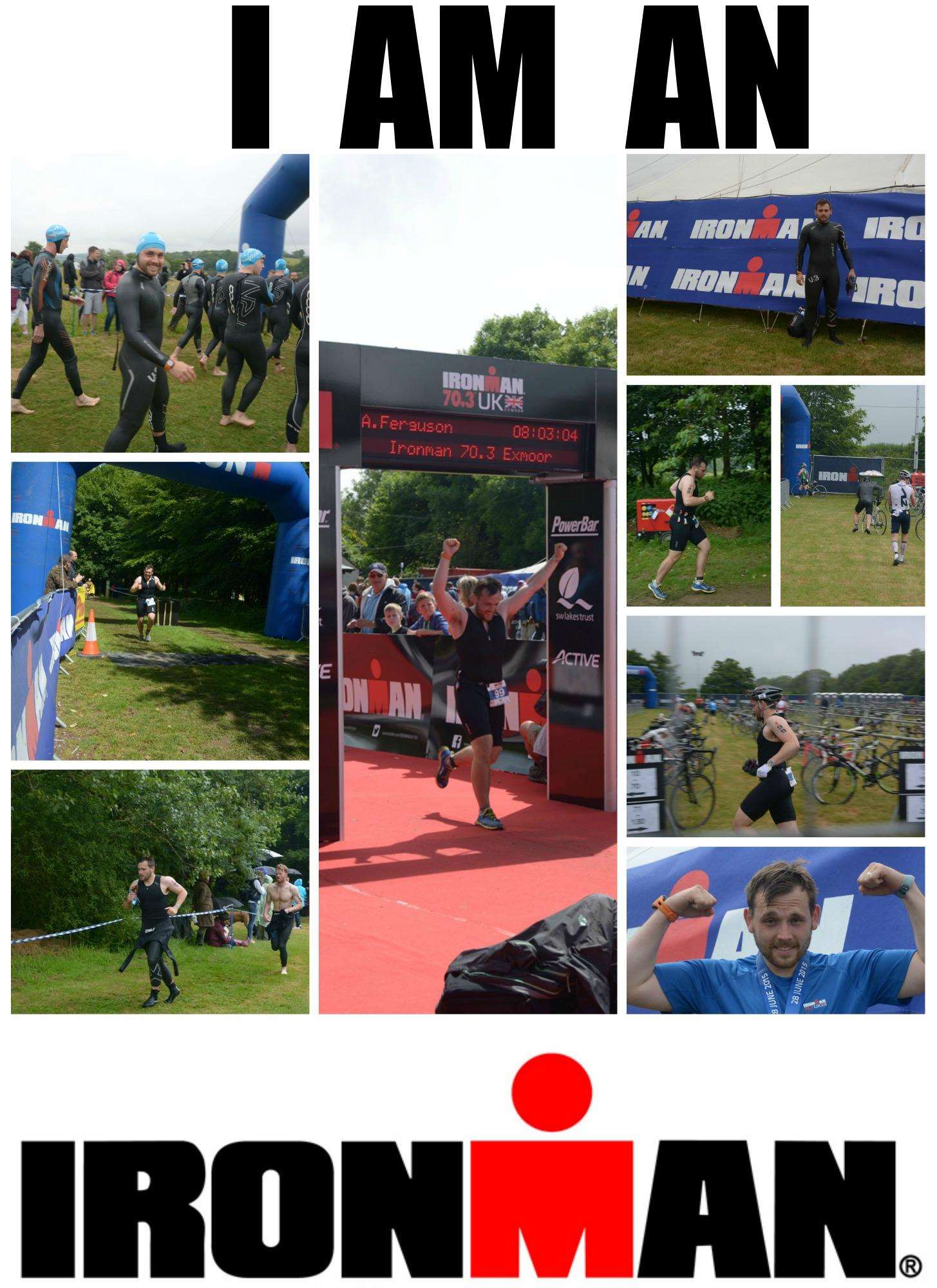 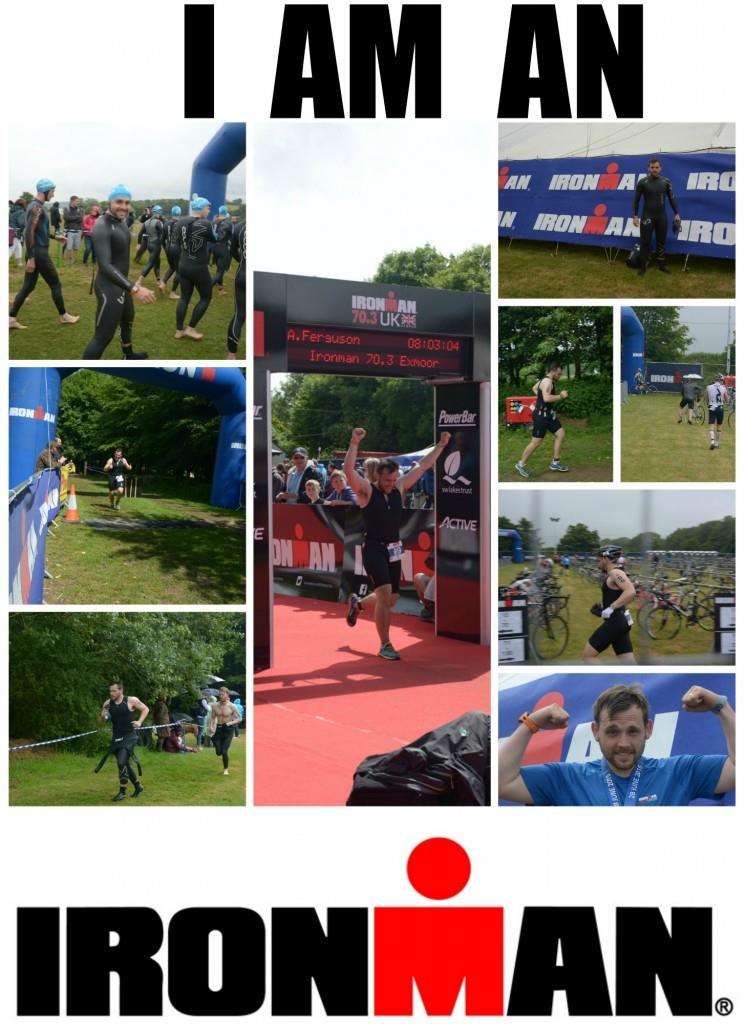 I am an Ironman. Ok…half an ironman, but still!

What possessed me all those months ago, when I press the submit button on the Ironman 70.3 UK application form, I’ll never know.

But one thing is for sure…

I can’t feel my knees!

I woke up early on Saturday morning, ready to begin my trip down Exmoor National Park. With the car loaded up with an endless supply of energy gels, my dad and I set off. 4 hours later and a few narrow escapes, what with my dad’s suspect over-taking manoeuvres, we arrived at Wimbleball Lake.

The setup of Ironman UK is great. I was impressed with the level of organisation and smooth running. Having 2000 athletes to organise can’t be easy, but they do this seamlessly.

I registered, had a wander around the merchandise tent and then went up to sort my gear out. Triathlon gear is a triathlete’s passion. We love the gear we choose to use and we like laying it out ready, stepping back and having a look. Admiring it before it does it’s job.

I went off to rack my bike, sort out my transition bags and get my head around the right exits for the bike & run.

I was ready. Now I just needed to actually do it!

0430hrs the alarm went off. Up, small bit of porridge and off to get kitted up.

At 0640 the 1st wave of 1000 athletes walked down, united in their anticipation of the hours of pain about to ensue, to the start of the swim. I was tucked up in my amazing 2XU V:3 wetsuit, which to be perfectly honest filled me with far more confidence than if I was without it. I also had my thermal skull cap and booties. I did look like a wally, but for me, I’d do whatever it takes to get through swim. It is a funny thing that having this kit, did make me feel so much better about attempting the swim. Somehow, having the right gear can provide an great boost to your confidence levels.

As the gun went off, I made sure I stayed out of the danger zone and positioned myself on the edge of the pack. I slowly got on with my business and took it a stage at a time. Before I knew it I was nearing the end and in record time. 42 minutes! That’s my quickest ever and the fact it was raining and choppy made me think I’d be far slower.

A fairly slow transition followed but most of the time was spent deliberating about whether to wear a waterproof or not. Turns out I made the right choice by wearing it, as it pissed it down for the entire bike phase. It was the wind that made it really interesting though. A wind and rain combination makes it very difficult to make up lost time on the downhills. I was forever on the breaks, fearful of skidding. Ironman UK Exmoor is notorious for the undulating hills. With a total of 3000m worth of climbing over the 56 mile distance, it is labelled as the hardest in Europe and my goodness… it was bloody hard!

The last 6 miles dragged on and on as if I was cycling through treacle. The corner into transition provided relief beyond anything experienced before. My cycle time was slower than I expected but I’m putting it down to the horizontal rain flicking in my eyes!

A quicker transition saw me out on the run in just a few minutes. (Thanks to the Zoot trainers that were seriously easy to slip on!) I was so happy to be off the bike that for the first few minutes I’d forgotten that I was practically dead on my feet. 13 miles to go and it’s at this point that your mental strength has to kick in. The run course isn’t short of hills either. Someone told me that the best thing to do when running is simply think about your next step, rather than the daunting distance that lies ahead.

The fuel stations were a god send and pretty much marked each lap for me. I just had to make it to the next fuel station for another mouthful of energy drink or water. It was a bizarre concept because at the start there were hundreds of runners on the course, but all of them were at different stages of their race. Some had just started the run, like me, and some were finishing their last lap. It was pretty depressing watching the number of athletes deplete as they all finished their race whilst I was still plodding along. It came to the 12 mile marker and my eyes perked up. I was nearly there! That last mile seemed remarkably quick. Maybe it was quicker! Either way, the red carpet of the finish line was drawing near. As my feet touched the carpet, I could hear the MC mentioning my name. I was about to complete it! Unbelievably, I was about to do it!

I crossed the finish line with my hands in the air. I am very rarely feel proud of myself, but in this moment I was. I’d accomplished something that not many others could have done. At 3 minutes over 8 hours, I was pleased with having completed the race. 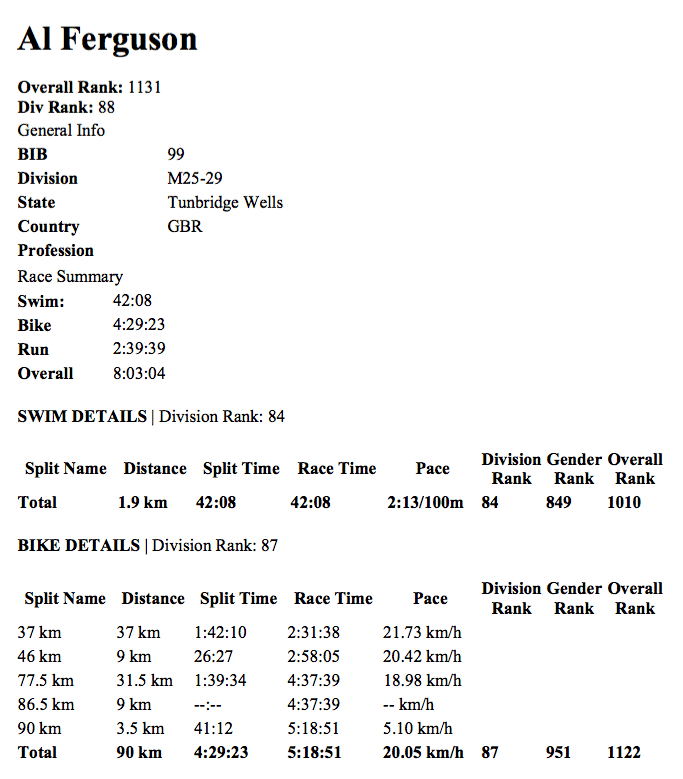 I was an Ironman.

The next day, I was back at work. I couldn’t walk up a staircase and I couldn’t bend down to put my own socks on. Muscles, I didn’t even know I had, were aching. But…

I am an Ironman.