Today is International Mens Day (IMD). That’s right; there is a global date in the calendar dedicated to men. And I think it’s a bloody good idea. A day with the sole purpose of encouraging men to be men and celebrating the honour that comes with manhood is such a valuable idea. (The day is sponsored by Dads4Kids, another excellent charity from Australia).

The IMD website says this, “Objectives of International Men’s Day include a focus on men’s and boy’s health, improving gender relations, promoting gender equality, and highlighting positive male role models. It is an occasion for men to celebrate their achievements and contributions, in particular their contributions to community, family, marriage, and child care while highlighting the discrimination against them.”

As The Dad Network, our goal is very similar. We aim to encourage and promote the role of dads within family life and, although we’re not as gender specific, encouraging good relationships between dads and their children is such an important part of what we seek to do. One focus of IMD this year is ‘men and boys working together.’

As I was looking into IMD though, 2 words jumped out at me: manhood and honour. Manhood is an interesting word and one that I think is often misunderstood. What is manhood? Well, we could look it up in Wikipedia, but I imagine that the reason you’re here is to find out what The Dad Network thinks, not Wikipedia. Manhood for us is about putting others before ourselves.

We believe manhood is about being strong in your morals and your beliefs. It’s about knowing who you are being honest with yourself and others. It’s about making difficult decisions for the benefit of others, and in particular, our families. And I’m fairly confident that IMD wouldn’t disagree.

Honour is a relatively uncommon word in everyday life. Yet, we think it carries such an importance. Honour is maintaining your integrity within your daily life, which brings a high level of respect. As you can see, honour and manhood go hand in hand. I’d even go as far as saying that honour lost is manhood lost.

As we go about our everyday lives as men and as dads, honour should underpin our words, decisions, actions and thoughts. I’m pretty rubbish at it, but all I can do is strive to be better. In my relationship with my wife, the boy and all my other family I will strive to become more honourable.

So with the help of IMD, The Dad Network and others alike, we dads should all strive to live within a culture of honour in our homes.

IMD also has the aim of celebrating positive male role models. And there are plenty out there, you just need to look! David Beckham for example; he’s become a global icon for philanthropy and he is a dad to 4 children. Barack Obama, Bear Grylls, Prince William – all dads, all men and all honourable. 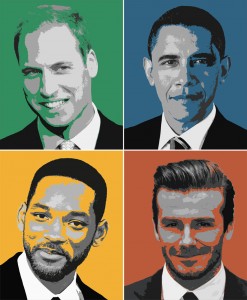 Custom Canvas, to mark the occasion of IMD, has printed a limited number of canvas’ celebrating some of those male role models. The company are specialists in creating customised canvas prints and they’ve released this piece of artwork to help raise awareness of IMD. It’s a really generous donation and the company is well worth taking a look at if you’re looking for a photo put on to canvas or anything else.

We are HUGE fans of IMD and fully support their ethos and aims. Check out their website and get involved… and be sure to share this to help us continue to spread the word of this great celebration of men.

*This was a sponsored post although the opinions are honest and reflect our thoughts on the subject.