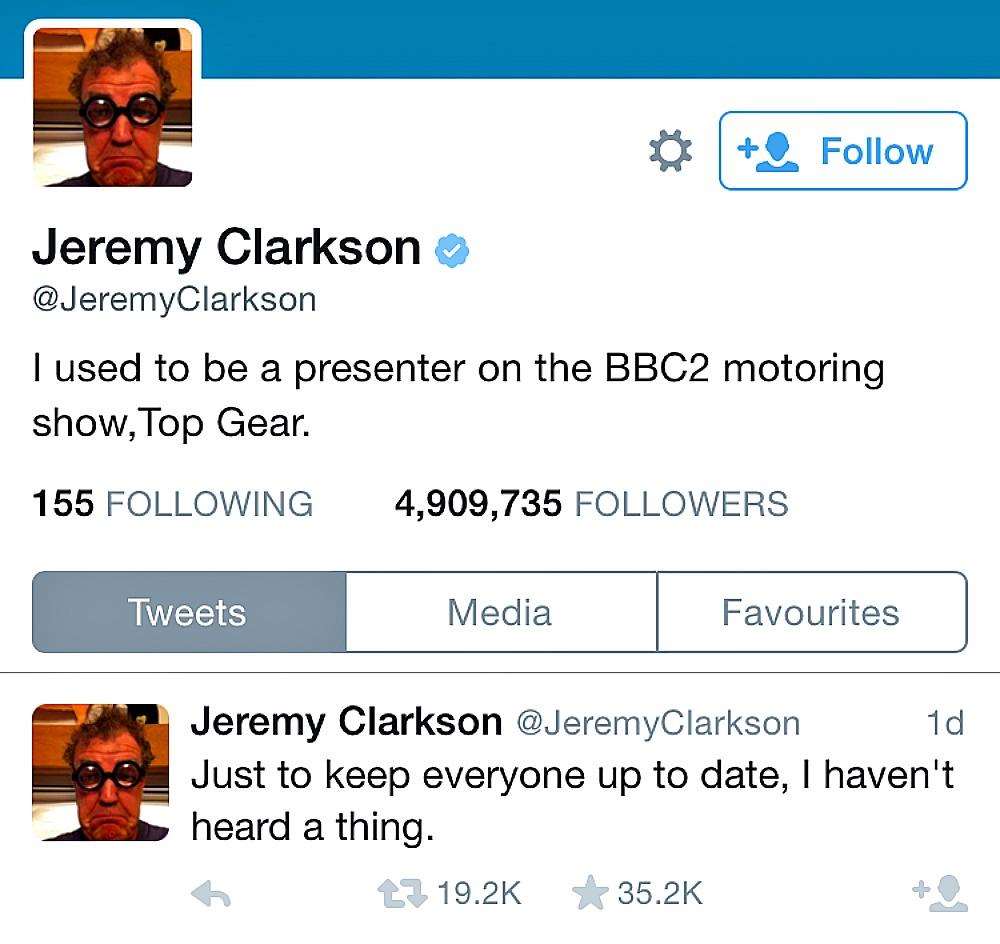 Calling all Top Gear fans! Jeremy Clarkson has been sacked by the BBC!

“What? Jeremy Clarkson sacked from the BBC and Top Gear?”

That’s right dads, you heard correctly. Jeremy Clarkson has been given the boot!

Clarkson has never been shy from controversy but this time he’s “crossed a line.” The saying, ‘the straw that broke the camels back’ comes to mind, but I think it’s more a case of, he’s used up his 9 lives!

Apparently after an “unprovoked physical and verbal attack” on a member of the Top Gear production team, the BBC director general, Tony Hall has ended Clarkson’s career, “with regret.” He said that the presenter had “crossed a line.”

After an investigation, it was found that Oisin Tymon had endured a 30 second unprovoked physical attack after being verbally attacked moments before. The verbal abuse was so loud in fact; it was heard from neighbouring rooms in the hotel where the incident took place. His injuries were severe enough for him to take himself to A&E and he was described as “shocked and distressed.” (…as anyone would be after being assaulted.) Obviously, this is an assault and so a full police investigation is likely.

When it says unprovoked, Clarkson was told that he couldn’t have steak and chips after a hard days filming, as the hotel had stopped serving hot food. That seems to me to be perfectly good reason to assault someone!?!?!?! (Just in case it doesn’t come through, I’m being sarcastic!)

Tymon resisted any retaliation, despite the fact that it was only due to a witness interfering that the attack was stopped. What is wrong with Jeremy Clarkson! Years ago there was an unofficial poll, where Jeremy Paxman was named the ‘hardest’ Jeremy in the public eye. I think the poll was obviously wrong! Or maybe Clarkson was just out to prove them all wrong.

So what about the future of Top Gear? Can it survive without the witty banter from Clarkson? Are Dad’s Sunday evenings about to change dramatically? Top Gear generates about £5m a year from its commercial enterprises and draws in 5 million viewers each week. The BBC are mid shoot for the latest series and have said they will continue with filming. But will it be the same?

With 1 member of the presenting trio no longer, the others, James May and Richard Hammond, face an uncertain future with regards to presenting Top Gear. These guys could be out of work…. Oh wait… hang on… they earn thousands from all their other presenting commitments! I’m sure they’ll be fine!

What do you think? Does this spell ‘the end’ for Top Gear?