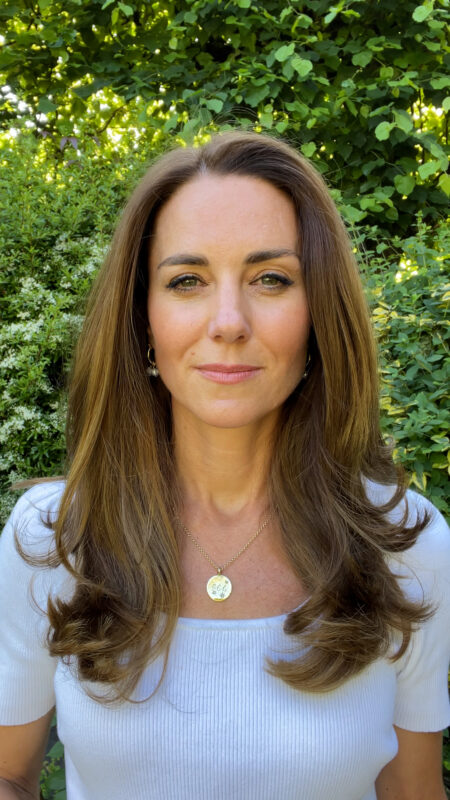 The development will shape Kate’s future focus as a senior royal and the centre will drive her vision to create a “happier, healthier, more nurturing world”, an aide said.

Kate is said to see the issue as the social equivalent to global climate change but is concerned that it is not being treated seriously enough.

The duchess – a future Queen – is understood to feel a responsibility to take on a societal leadership role to raise awareness and create action.

“The duchess has made the observation that the more you learn about the science of early childhood, whether it’s brain development, social science, what it means for our adult mental health, the more you realise that this is the social equivalent to climate change.

“But it is not discussed with the same seriousness or strategic intent that that issue is.”

In a video to mark the launch, Kate, wearing a necklace engraved with her children’s initials, said of her crusade: “Working closely with others, the centre hopes to raise awareness of why the first five years of life are just so important for our future life outcomes, and what we can do as a society to embrace this golden opportunity to create a happier, more mentally healthy, more nurturing society.

“By working together, my hope is that we can change the way we think about early childhood, and transform lives for generations to come. Because I truly believe big change starts small.”

The Royal Foundation Centre for Early Childhood stems from research which shows the first five years of childhood fundamentally shape adulthood, with social challenges such as addiction, violence, family breakdown, homelessness and mental health having their roots in the earliest years of life.

The centre will focus on three key areas: research; developing new solutions with public and private voluntary sectors; and campaigns to raise awareness.

Its website will showcase its major initiatives, highlight its research, and act as a platform for those who want to find out more about the impact of early childhood.

A royal aide described it as a milestone moment for Kate.

“The vision that the duchess has is for a happier, healthier and more nurturing world,” he said.

“The centre’s mission is to drive awareness of and action on the extraordinary impact of the early years, changing what we think and do in early childhood in order to transform society for generations to come.

“That’s a big mission and vision but we’re going to be grounded in some really tangible, practical actions.”

Work at the centre will include finding ways to engage teenagers with the science of early childhood brain development, so they have the knowledge ready if they become parents later on.

The initiative has been borne out of Kate’s decade-long work as a member of the royal family, looking first at addiction, family breakdown and mental health, and then going further back to explore the school environment and then early years.

“She was constantly wanting to get to the real root of the problem,” the aide said.

They added that Kate reframed her thinking after exploring science and research into the impact of early years: “It’s this 10-year journey that has influenced the character and mission of this new centre.”

Lord Hague, chairman of the Cambridges’ Royal Foundation, described the centre’s creation as a pivotal moment for the duchess’ work in the area.

“Her Royal Highness and The Royal Foundation are determined to help bring about lasting change for future generations,” he said.

Its Big Change Starts Small inaugural report, written in collaboration with The Centre on the Developing Child at Harvard University and the London School of Economics, revealed that the cost of lost opportunity is £16.3 billion in England alone.

Research by YouGov commissioned by the Foundation published on Friday – the final day of Loneliness Week – showed that parents of young children have continued to feel lonelier as the pandemic has progressed.

Kate’s centre will employ around six members of staff to begin with and be based at the Royal Foundation’s offices in London, and be funded by the Foundation’s supporters, with a view to direct funding partnerships in the future.

In November, Kate published landmark research on the role of early years on shaping adulthood, which found that only one in four people recognised the key importance of the first five years of a child’s life.

More than half a million people took part in the “five big questions on the under-fives” Ipsos MORI poll  – the largest response from the public to a survey of its kind.

What are your thoughts about The Royal Foundation Centre for Early Childhood? Leave a comment down below!