Marcus Rashford and the Beano – the dream team? 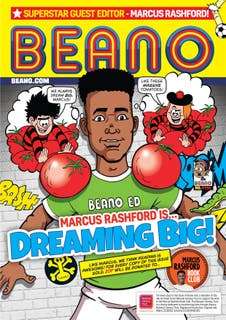 Marcus Rashford and the Beano might just be the dream team. The England and Manchester United star has guest edited the legendary comic and told its readers to find their voices.

The campaigner also makes several appearances throughout the special edition, drawn alongside popular characters including the Bash Street Kids, Billy Whizz and Bananaman.

Marcus Rashford and the Beano – what to expect?

The special collaboration between Marcus Rashford and the Beano is available from Wednesday. In his editor’s letter, the campaigner claimed he “jumped at the chance,” to be involved with the comic.

He said: “Nobody is a success in football without good teammates, and that’s true in life as well. Everybody needs to build a team of allies to have fun with and speak up for what’s important.

“Our voice is strong alone, but when our voices come together, we are powerful. When we fight for things that are important together, we can make progress a lot quick than by ourselves.

“Finding your voice doesn’t have to be difficult. It can be as simple as having the confidence to stand up for something you believe in, or to champion someone else and their difference.

“Your journey is your strength, and everyone has something valuable to contribute.”

He added: “My favourite thing about Beano is how the comic brings together all sorts of different children.

“Instead of our differences dividing us, we embrace them here, and we find strength in them. We should be celebrating all things that make each of us unique.

“Reading is one of my favourite things to do because it lets me dream. I see myself achieving so much more and I’m motivated to give new things a try.”

For every copy of the special Beano sold, 20p will be donated to the Marcus Rashford Book Club to help children access books.

The connection between Marcus Rashford and the Beano is not the first such hook up. Other previous guest editors include Andy Murray, Dick and Dom, David Walliams and Harry Hill.