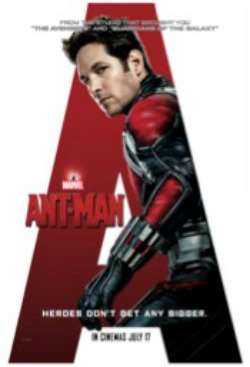 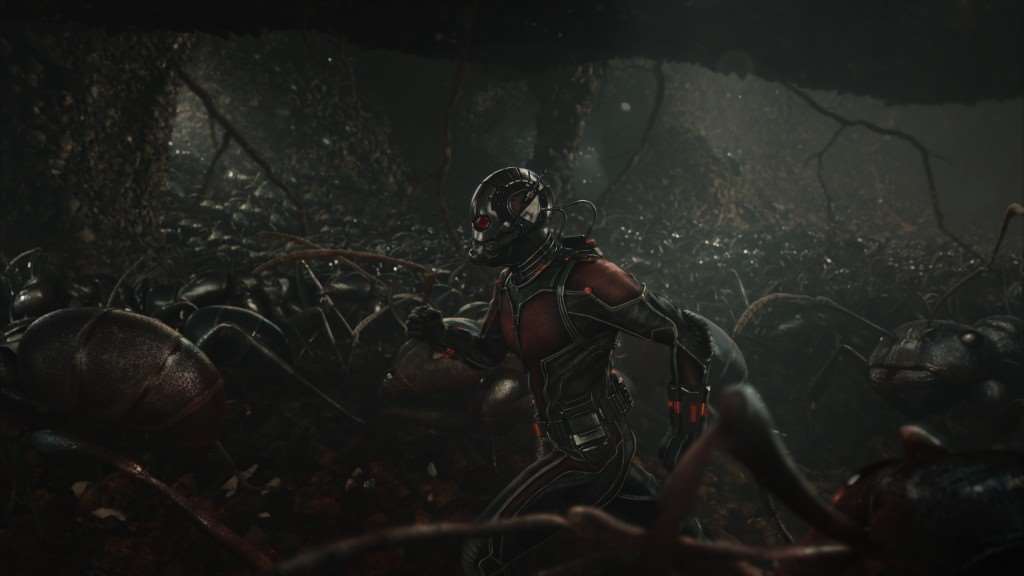 Marvel’s Ant-Man..Scott Lang/Ant-Man (Paul Rudd) amongst his ants…Photo Credit: Film Frame..© Marvel 2015
In a few days time, superhero movie Ant-Man will hit the big screen. Taking time out from his own blog, John Adams from Dadbloguk.com went along on the press junket to meet various members of the cast. Here’s what happened. . .

Ant-Man is the latest film based on a Marvel comic character to hit the big screen. The film is a big-budget production from Disney and The Dad Network was given an amazing opportunity to meet with cast members Michael Douglas, Paul Rudd, Michael Pena and director Peyton Reed.

Needless to say, meeting Hollywood royalty like Douglas and Rudd (remember Phoebe’s boyfriend from Friends? Yup that’s him, not to mention roles in Anchorman 1 and 2 plus 40 year old virgin etc.) caused a certain amount of excitement. Having to walk into a five star hotel in central London where an entire floor was being used by the Disney media machine was a real “squeee” moment and quite an experience. 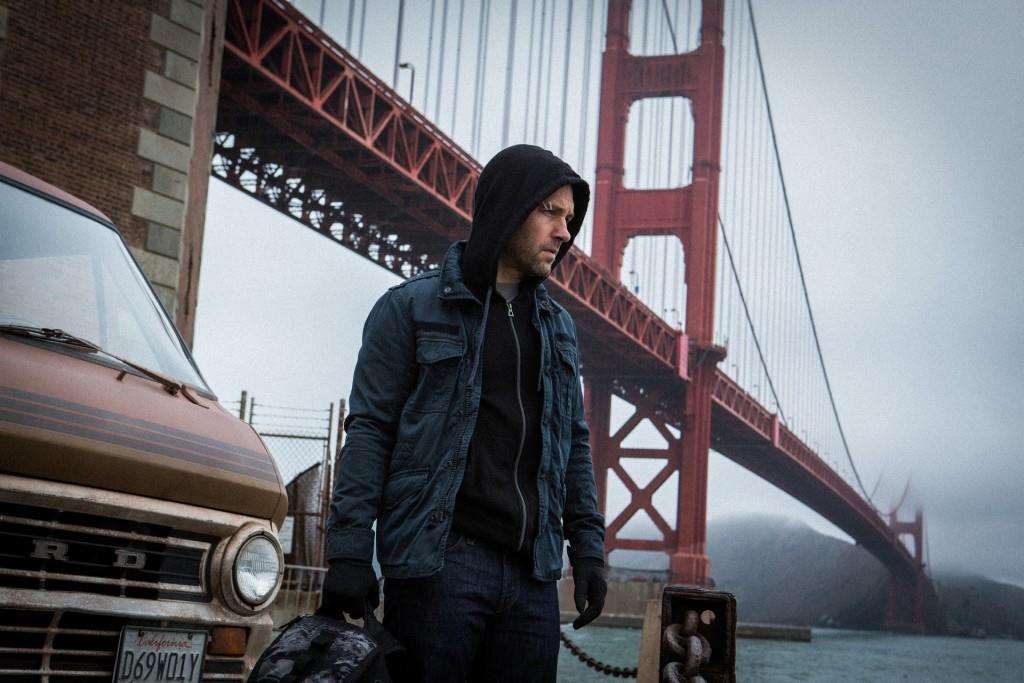 MARVEL’S ANT-MAN – Shot on location in San Francisco, Paul Rudd stars as Scott Lang AKA Ant-Man, .in Marvel Studio’s Ant-Man, scheduled for release in the U.S. on July 17th, 2015…Photo Credit: Zade Rosenthal..© Marvel 2014
Enough of this, ‘though, let’s get on to Ant-Man. In brief, it’s about a guy called Scott Lang (Rudd), a criminal just released from prison. Although he wishes to go straight, he wants to pull off one final heist with prison friend Luis (Pena) so he can be a heroic father to his young daughter, Cassie. Unfortunately for Lang, life has moved on and Cassie now lives with his ex-wife and her new husband.

Along the way Scott Lang meets Hank Pym (Douglas) a scientist and widower who has a strained relationship with his grown-up daughter. Hank gives Scott the chance to don a super hero suit, carry out his final heist, save the world from an evil mastermind and become a hero in his daughter’s eyes. 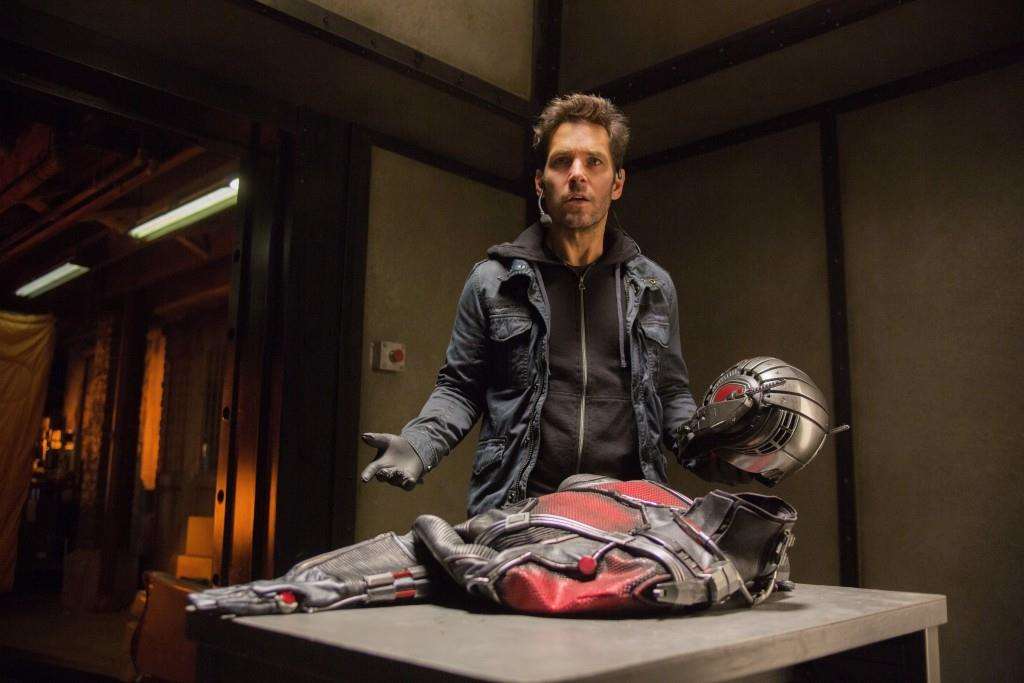 Marvel’s Ant-Man..Scott Lang/Ant-Man (Paul Rudd)..Photo Credit: Zade Rosenthal..© Marvel 2014
If you want to know the rest, you’ll have to see the film or read the full film review which is coming shortly. Suffice it so say there are all manner of father-daughter based sub-plots. There’s the relationship between Scott and Hank and their respective daughters. For me, one of the most poignant aspects of the film is the portrayal of the relationship between Cassie and her stepfather, Jim Paxton (played by Bobby Cannavale). Stepmums are often portrayed in films and in the media. Stepdads, however, are a rarity.

When quizzed about the stepfather dynamic, director Peyton Reed said: “Scott’s only goal at the beginning of the movie is to be part of his daughter’s life. He goes on this crazy path to achieve it. 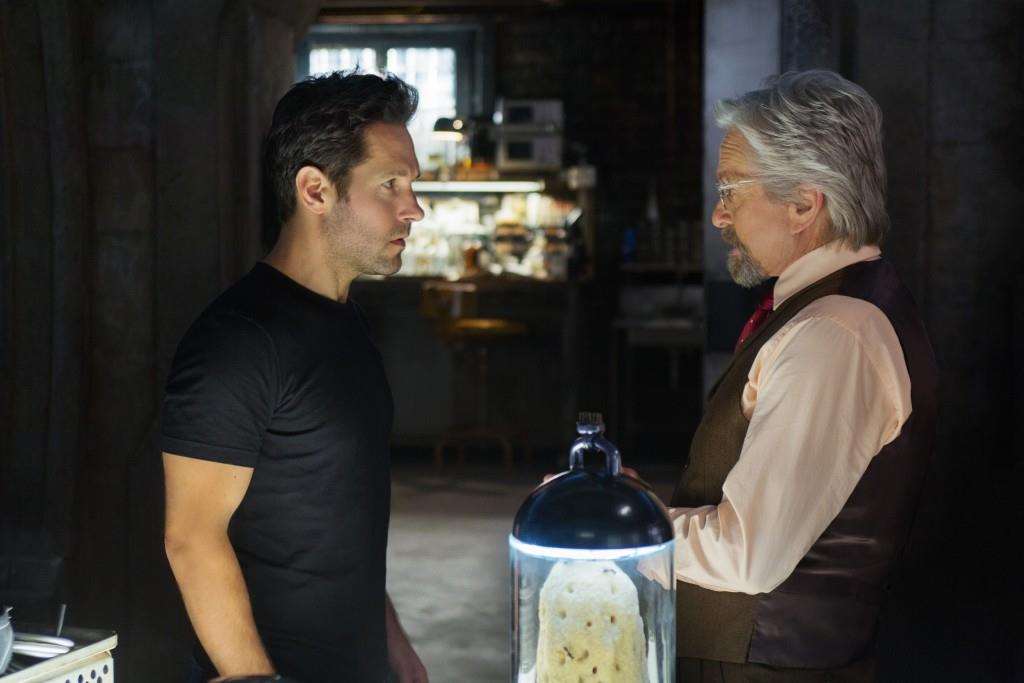 Marvel’s Ant-Man..L to R: Scott Lang/Ant-Man (Paul Rudd) and Hank Pym/Ant-Man (Michael Douglas)..Photo Credit: Zade Rosenthal..© Marvel 2014
As you may have gathered, Ant-Man is far more than a simple superhero film. Reed goes on to talk about the many relationships in the film and why this appealed to him;

“One of the things that appealed to me was that this was a very different kind of Marvel move. It was smaller in scale and design but it was an intimate movie and these relationships are crucial to it. There are two father-daughter stories happening, even a husband and wife dynamic and arguably although they’re not father and son, the Hank Pym / Derek Cross relationship (Cross is the film’s bad guy and a former Pym protégée).

“I like that there are all those dynamics going on. They’re integral to the movie.”

And what of father of two Rudd? Did he call on his experiences as a dad in his role?

“Oh yeah, for sure. From the Marvel comics, Scott Lang is doing what he does for his daughter. Lang is the first of the Marvel leads that’s a father. When working on Ant-Man, we were focusing on the relationships between dads and daughters.

“I’m a father and I have parents. That’s absolutely what I hung the thing on.”

Rudd looks incredible for his 46 years. This caused quite a bit of discussion among the writers present. When I asked about his skincare regime, he laughed and refused to comment; “In case I write a book or something!” 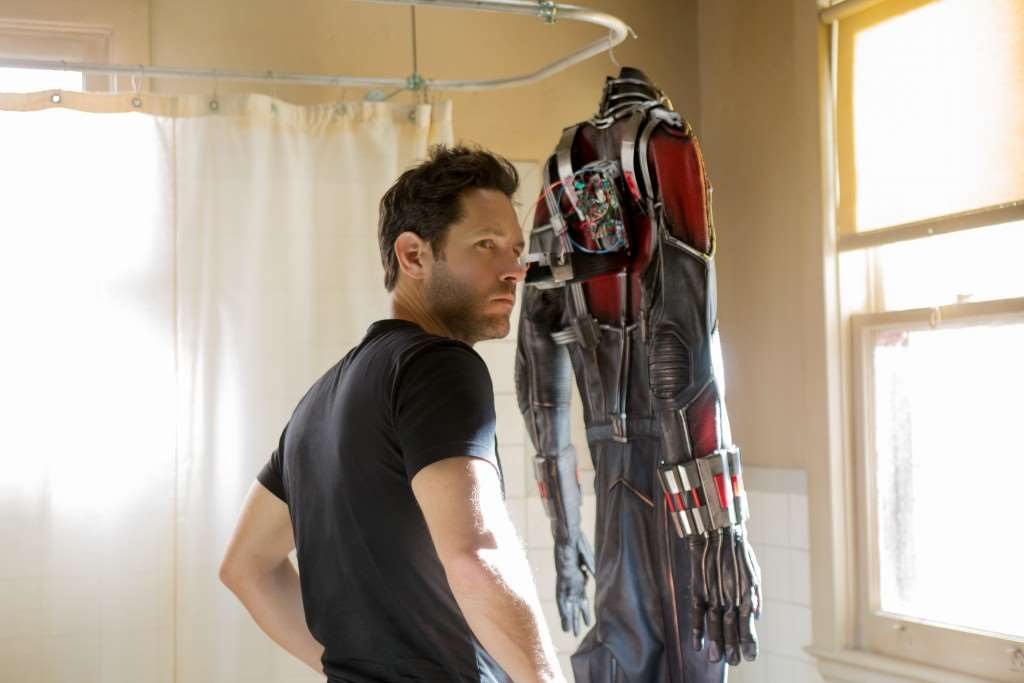 Marvel’s Ant-Man..Scott Lang/Ant-Man (Paul Rudd)..Photo Credit: Zade Rosenthal..© Marvel 2014
Michael Douglas looks very good for his 70 years, although he is smaller in stature than I imagined. With his mother having only passed away the week before, nobody was too sure if he would be able to attend. A consummate professional, he flew in from Los Angeles the previous evening and was on good form, especially considering his loss.

Although Douglas is the biggest name in the film, Hank Pym is a supporting role, albeit a very important one. Asked if he minded taking on a smaller role, Douglas remarked “I’d rather have a small role in great movie than star in a bad one.”

Douglas’s wish seems to have been granted. The reaction to the film has, thus far, been very positive.

The role also breaks new ground for Douglas on two fronts. Firstly, he had to immerse himself in the world of comics, something he has never been heavily into. This involved spending a day at Comic Con and Douglas freely admitted he found it a strange experience and that it wasn’t really his kind of thing.

Secondly, this is the first special effects-focused film Douglas has worked on. Throughout the interview he repeatedly made reference to the fact he’d wanted to work on such a film and now he’d done it, he appreciated how tough it was. This, he said, was largely down to the fact he was frequently acting with nothing but a blue screen so the computer-generated effects could be added later.

But what of the scope to explore fatherhood issues? Did this aspect of the role appeal to Douglas?

“It was as we went on, but you could have given me the telephone book quite literally as an effects movie. I wanted to be in one of them.”

The answer, it seems, is no! 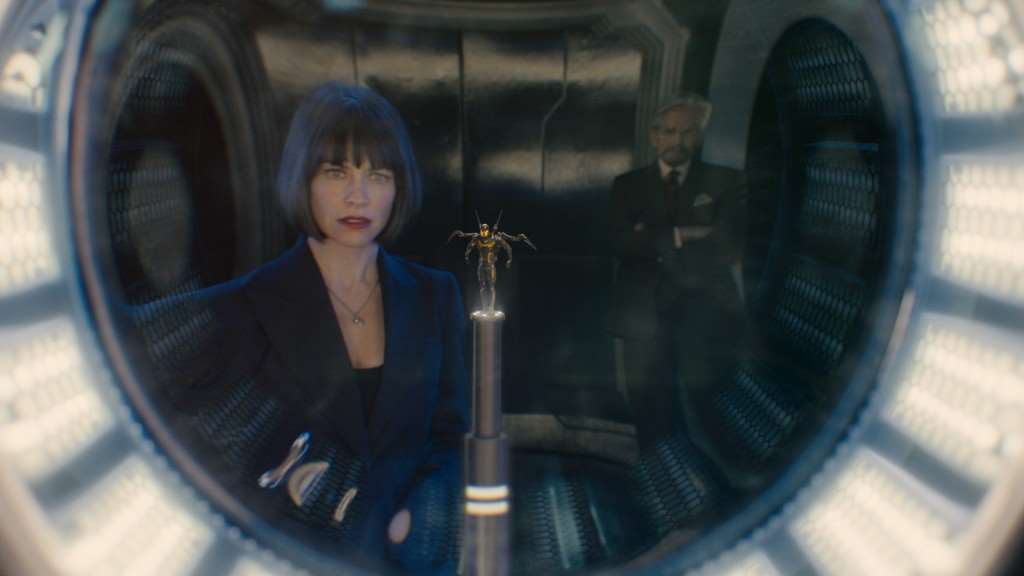 Marvel’s Ant-Man..L to R: Hope Van Dyne (Evangeline Lilly), the Yellowjacket suit, and Hank Pym (Michael Douglas)..Photo Credit: Film Frame..© Marvel 2015
Pena’s character, Luis, has been described by some as humorous sidekick. Pena, who starred in Crash and Cesar Chavez, disagrees. The dad of one points out that Luis was the mastermind behind the heist that Lang wishes to carry out and without that role, there would be no film.

The film’s production notes also state that Pena’s role was expanded as the film went on. Clearly he impressed his co-stars and the director.

Wherever you stand on the magnitude of the role, this is a big part for Pena. He makes some interesting observations about Hollywood and how it is opening up to individuals from different ethnic backgrounds (his parents are Mexican).

What does he think has led to this change?

“I really don’t know. It’s really exciting to have an African American president. I never saw that coming. I guess what’s changed is the audiences, America has changed.”

He adds that YouTube and the ability for anyone to make a video quickly, may also have had an impact on US audiences.

And what of further Ant-Man movies? The ending of this film has been left wide open with various options for more Ant-Man action. While Douglas and Rudd remained tight lipped, Pena admits that he has signed a three-film deal. He quickly adds that’s no guarantee and that “it’s a standard thing” to sign up to several films and that there’s no guarantee they’ll go into production.

The film has a superhero, comedy, suspense and a plethora of subplots examining various parental relationships. What more could you want?

Ant-Man will go on general release on 17 July.