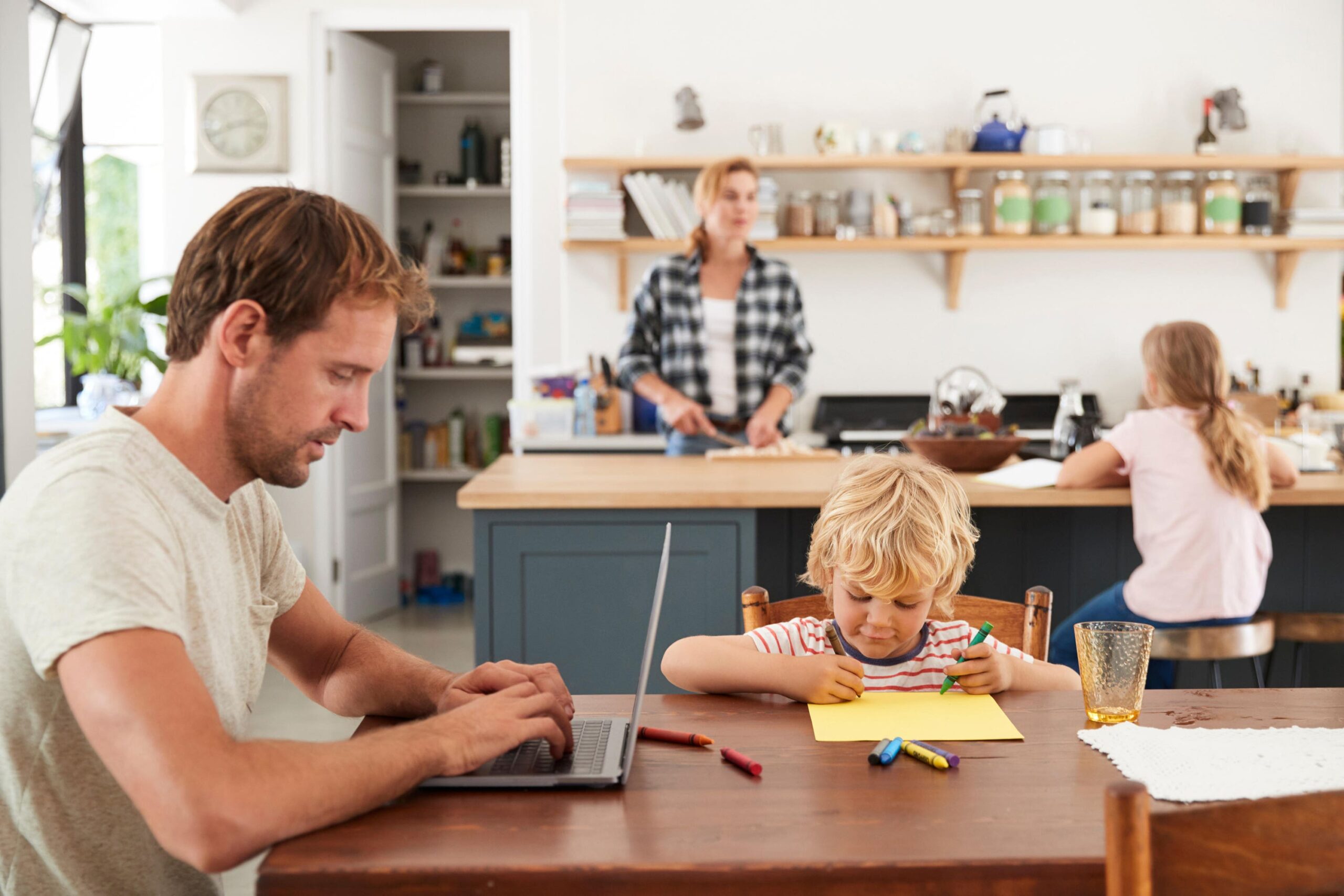 Struggling with being the one who has to organise everything? You’re not alone.

We’ve been told time and time again that women in heterosexual relationships typically take on more of the ‘mental load’ when it comes to family life – that’s the planning, organising, the ‘thinking of everything’, knowing where everything is, and generally foreseeing the needs of the rest of the family.

Even if physical tasks, chores and childcare might be more evenly split, mums are disproportionately carrying the burden of the ‘management’ of those tasks – and the responsibility to delegate.

Of course it’s not the case in every household, but a major study by Arizona State University found nearly nine in 10 mothers in committed partnerships said they feel solely responsible for organising the family’s schedules. The charity Pregnant Then Screwed say their data and testimonials clearly show the planning, remembering and managing predominately falls to women.

Because this kind of unpaid work is harder to define than the physical task of say, making beds or picking kids up from school, it’s also known as ‘invisible labour’ or ‘cognitive labour’. So as well as taking up time and energy, it also often goes unnoticed.

Why does it happen? 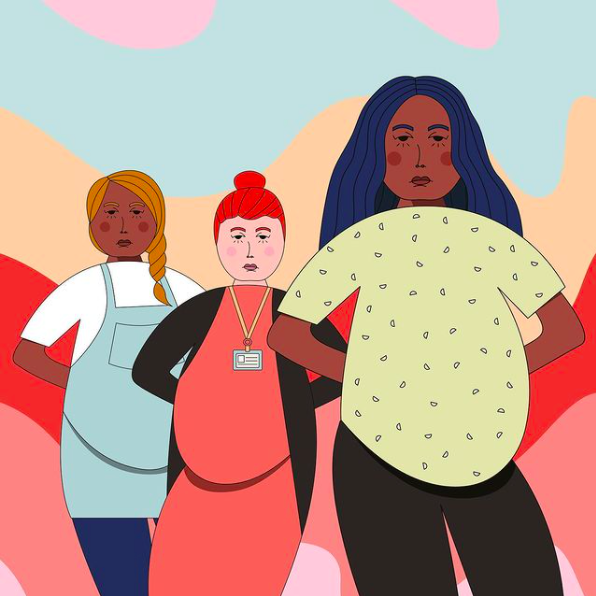 “Even though we are in 2022, the gender roles have been set from previous generations and are still present amongst families,” says Kate Megase , psychotherapist and CEO of The PGDC (The Personal Growth and Development Centre). “Gender roles are subconscious,” she adds, and current behaviours are heavily influenced by subconscious learnings from our own childhoods. It’s something Megase can relate to personally; “As a mother [of two], when I am unwell, the house just stops. There is no structure.

“A person’s culture plays a big role in family gender roles. I’m from Africa, culturally women from Africa are expected to be the family thinker and planner,” she says.

“Deeply entrenched gender stereotypes do play a large role,” agrees Joeli Brearley, CEO of Pregnant Then Screwed and a mum-of-two. In the grand scheme of things, even the notion that housework and childcare should be shared is relatively new (the marriage bar, restricting the employment of married women, was still in operation until the Seventies). And, “the unequal share of the domestic load was never more apparent than during the pandemic,” she says. Research by PWC, found that as a result of Covid, women spend 7.7 more hours per week on unpaid childcare than men.

Lots of women will say they never thought once about the maternal mental load before having children, so why does having a baby seem to exaggerate the inequalities?

“Before you have children, it doesn’t matter if the house is a mess and the dishes aren’t done so you can stand your ground and wait for your other half to pull their weight,” Brearley suggests. “After you have kids, there are hundreds of tasks that are urgent and vital.” The house needs to be clear and safe, children’s clothes need to be clean, babies need routine and schedules, for example. 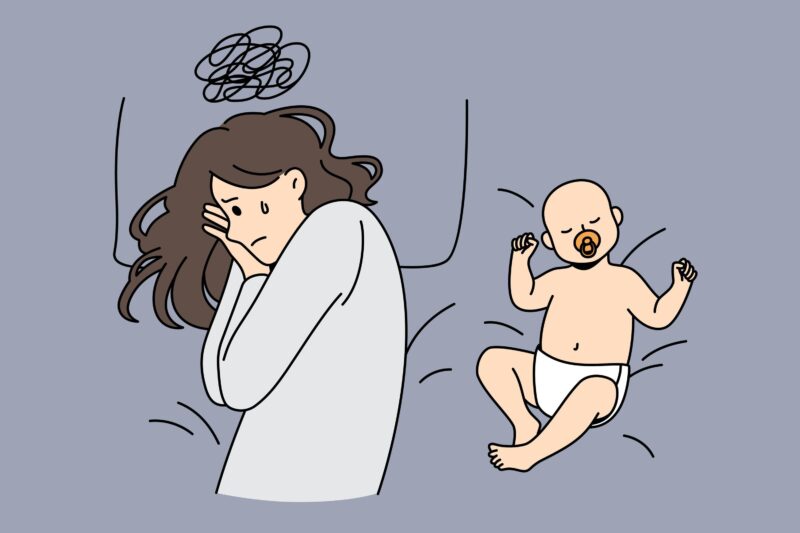 While shared parental leave was introduced in the UK in 2015 – allowing mums to end maternity leave early so that the other parent can take leave during the baby’s first year – it’s only taken up by 2% of eligible families, according to the 2018 government campaign, ‘Share the joy‘.

“I think current legislation is also to blame,” says Brearley.

“If we followed other countries, such as Sweden, Norway and Finland, and ringfenced paternity leave and paid it at a decent percentage of their salary, then men would take time out to care for their kids in their droves.”

As it stands, for many families it doesn’t make financial sense for dads to take more than the standard two-week paternity leave. “With women taking approximately nine months off work in those early days to care for the children, this embeds the idea that she is the main carer.” From there, it can be an uphill battle to achieve real balance.

But what about when women return to work, shouldn’t the mental load all even out? Many find this simply isn’t the case. Brearley says: “Once these roles are cemented in place, it is very difficult to reverse.”

Guilt also plays a part, she says. “The foundations of guilt are laid on women from the moment they get pregnant. They are made to feel entirely responsible for this growing baby and every action they take could directly impact the baby’s health.” So deep-rooted are these messages that, for many women, there may be an element of feeling like they should be thinking of everything. 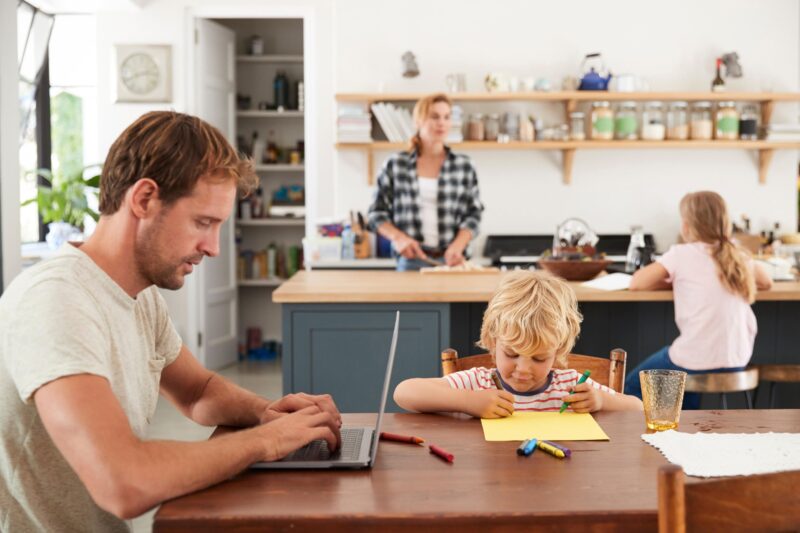 If you feel this way, it might seem like you have to accept that the family’s mental burden is somehow part of being a mother, and a woman. But there are bigger consequences, “from women requesting to reduce their hours at work as they feel completely overwhelmed, to the deterioration of their mental health,” says Brearley.

“Women tell us that they feel forced to take a step back from their careers as they simply do not have the time or the capacity to take on the project management at home and in the workplace.”

Last year Government research showed 38% of women in employment in the UK work part time. “Most do that so they can manage all of the unpaid work they have to do [at home],” says Brearley. This, of course, contributes to the gender pay gap and the lack of women in senior, influential positions in many industries. It’s a vicious cycle.

“If we look at other countries where the domestic load is shared more equally between a mother and father, there is a direct correlation with gender equality at work,” she adds.

What can you do to redress the balance?

To avoid growing resentment within a relationship, it’s important to have some frank conversations, and the sooner the better.

It’s possible that there’s a lack of clarity over how much you take on, so sit down and make a list. “Write it all down and show them what it is you have done over that previous month, explain how the mental load is affecting you and how it just isn’t possible to manage this level of mental and emotional labour without losing your marbles,” suggests Brearley.

And it can change – but you both need to be on board. Eve Rodsky, author of Fair Play: Share The Mental Load, Rebalance Your Relationship and Transform Your Life, and newly released Find Your Unicorn Space, says: “It requires open communication, regular check-ins, clarity of responsibilities and a full understanding of who is holding what tasks.”

It’s important not to fall into the trap of handing out random tasks (again, delegating). “Taking on a task means you take on the full conception, planning and execution of the task – from start to finish,” stresses Rodsky.

“Schedule regular check-ins when the kids are in bed and cognition is high, but emotion is low. What cards are in play, who is holding them? Do any need to be added and should any be removed? By creating a practice of communication you both can start to better understand what is on each other’s plates and prioritise what is important so no one is getting nagged and nothing falls through the cracks.”

Arranging time where you are completely free from the mental load could be possible too. Megase says: “In our home we find it helpful to alternate having days off. Wednesday is my husband’s day and he has time off and I take on full family responsibility. And on Sunday I have time off.”

How do you and your partner help to share the mental load?  Let us know in the comment section below.