Mum Charged with Homicide for not Securing Daughter’s Car Seat 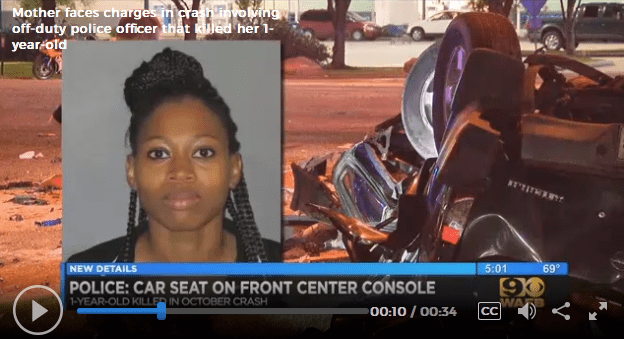 Before we share the story of what happened, it goes without saying that this is a tragic event and our thoughts are with the family of the family involved.

A mum from the USA is facing homicide charges following a fatal car crash in which her daughter, Seyaira, died because her car seat was not fastened securely.

Although the mother, wasn’t actually driving the car when the crash occurred, the police still arrested her for one count of negligent homicide because she,

“was the person responsible for buckling the car seat.”

There’s bound to be even more controversy around this story because the crash was in fact caused by an off-duty policeman driving at 94mph. He drove straight into the car containing Seyaira.

Apparently, according to a blood test, the policeman at fault was not impaired at the time of the crash, although was clearly driving way over the legal speed limit.

The mum & daughter were traveling along with 3 other adults and 3 other children, in a 5-seater Nissan SUV. Nobody on the car was reportedly wearing seat belts. A police spokesman said that the car seat was,

“on top of the center console, wedged between the front passenger seat and the driver’s seat.”

The off-duty policeman was arrested for negligent homicide but after discovering that the car seat was had not been secured and the straps hadn’t been adjusted according to Seyaira’s height, they decided to arrest the mother also.

Interestingly, whilst parents can legally be charged with homicide for failing to secure a child’s car seat properly, it’s a rare occurrence than anyone has actually been prosecuted for this.

This is such a tragic happening, but it certainly brings home the fact that making sure your child’s car seat & seat belts are secure, is vital.