I cannot tell you how many times I have met dads that are caring for their baby, but are following strict instructions from mum.

I have seen dads actually checking laminated print-outs to see when the baby needs feeding and what they have to give them to eat. I have seen dads panicking because their baby is tired and falling asleep but the spreadsheet they were given says it’s not the right time. They are genuinely worried they will be ‘told-off’ by their partners or genuinely worried that without the instructions, they’d have no idea what to do. What?!

I would be absolutely horrified if Jen went out for the day or night and left me a list of instructions like this: 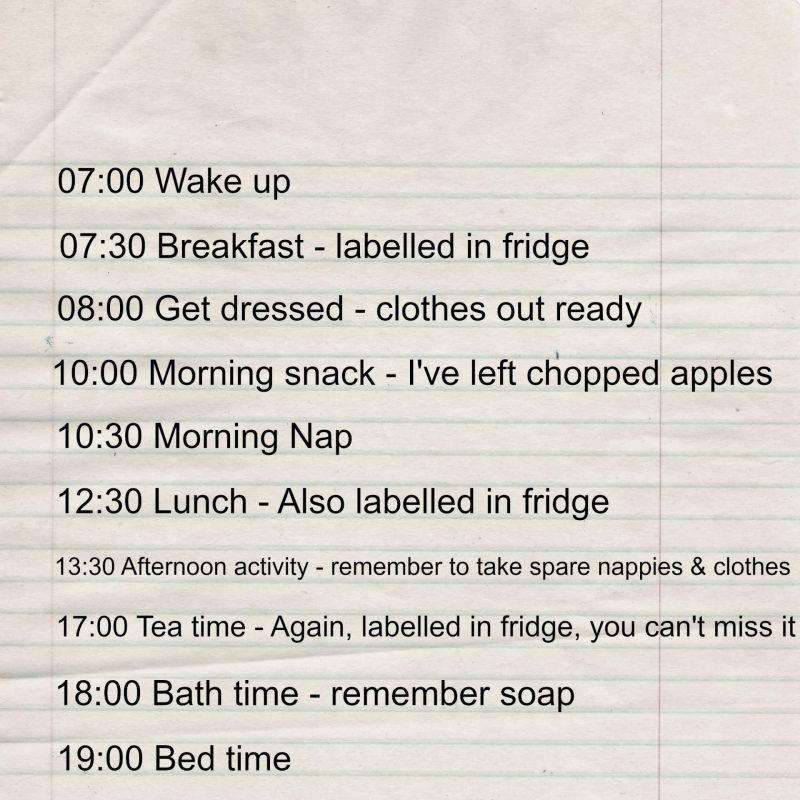 I don’t leave her one when I go to work! Can you imagine? And I certainly don’t need one when she goes out. I am Ted’s dad. His father. I know how to look after him, all by myself.

I know when he is tired because I know the signs – he rubs his eyes and pulls his ears and recently, lays down on the floor and shuts his eyes. A pretty big hint, I guess.

I know when he is hungry because I know when he was last fed and how much he ate. When Ted was breastfeeding, I kept track of the timings of his feeds myself. Don’t get me wrong – we have a rough routine for Ted, and always have and we both try to stick to it but Jen doesn’t need to write this down for me. I know it. And she certainly wouldn’t be cross with me if Ted fell asleep slightly early or ate slightly late.

Why? Because it is my responsibility as Ted’s father to take good care of him. I am as much a parent as Jen is and I am able to meet his needs and care for him exactly as she is… minus the boobs!

I think there’s a deeper underlying problem here; many dads don’t trust themselves. Is it because society has, for years now, said that dads don’t know how to parent and it’s become so ingrained in us that we nowjust believe it? Or is it because some dads have control freak partners? I don’t know.

People talk about ‘women’s intuition’, but what about dads? We can also decide if our children need to sleep or eat. When I have Ted, I know that, as his dad, I can parent him without the military precision of a spreadsheet provided by his mum.

To the dads using the instructions, put your spreadsheets away. Trust your instincts, be confident and parent your way. If you’re a working parent then try to have some special time alone with your child on the days that you don’t work. In the words of a well known trainer brand – just do it.

To the mums giving the instructions and leaving lists – trust dad.

What do you think, though?