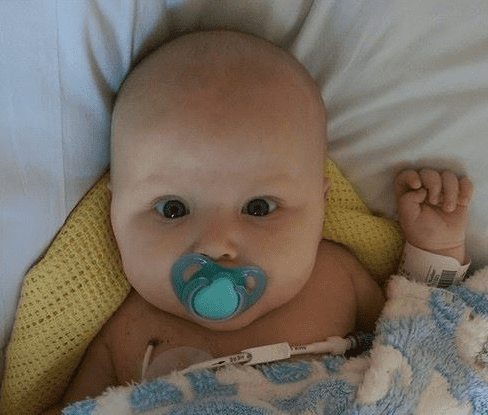 I am a Dad of 3 boys, 7 years, 3 years and 6 months, happily married to my childhood sweetheart, our son (3) has been fighting Cancer since 11 weeks old


I am father of 3 boys and happily married to my childhood sweetheart, I’d like to tell you about our middle son, Callum who is 3.

He fell ill when he was 9 weeks old. He got a chest infection called Bronchiolitis & he took a bad turn with it He was in an oxygen box, suffering from a collapse lung and could not eat. As a result he was placed onto intravenous fluids and nutrition.

The next day they had to take blood from him to check whether the IV fluid and nutrition was doing what they wanted and keeping him hydrated. It was then that they noticed something was different in his blood.

We were originally told he had a very strong infection; his white cell count was on the rise and his red cells and his platelets that help with bruising were on the fall. They advised they will liaise with experts Alder Hey children’s hospital, however their primary goal is to give him 2 blood transfusions and get him over the chest infection.

We got discharged from the hospital on the 13th of December 2014, on the premise that we came back to the hospital everyday for blood tests so that the experts at Alder Hey can continue to monitor his white cells and other blood markers. Happy Christmas!

He has Infantile Acute Lymphoblastic Leukaemia – A cancer of the blood

On the third day, they asked us to come to Alder Hey.

“Do not rush or panic, no need for blue lights, however we do ask that you pack a bag for 2 nights stay and we will perform a bone marrow aspirate to get to the bottom of what is wrong with his blood”

He went into theatre and on the same day the Haematology consultant at the Oncology ward in Alder Hey sat us down and told us the absolutely devastating news that our (at the time) youngest child had Cancer of the blood. We then spent the following 50 days in Alder Hey children’s hospital. Our eldest son regressed. He was 4 at the time. He began wetting the bed again, not eating and vomiting on random days. He was suffering from childhood anxiety and rightly so; who can blame him. This new baby brother came onto the scene and for 50 days he’s basically had mum and dad to himself. And it’s hard for a 4 year old to understand why that has to be the case.

Watching them pump Chemotherapy into such a small child

Callum responded to treatment incredibly well. He was in remission as early as 5 weeks into his 6 month grueling chemotherapy protocol. He was so small, still only a baby, yet he had to endure so much pain and faced so many challenges.

Some of the Chemotheray breaks the mucus barrier down in your stomach, throat and mouth and as a result he suffered from ulcers and blisters all the way down from mouth to stomach. There is just no way to  understand a babies pain nor explain it to them what and why it’s happening.

After 6 months, Callum was finally allowed home and onto a ‘Maintenance Phase.’

Maintenance phase is where he received low doses of Chemotherapy for 2 years to ensure the Cancer stays at bay for life. He was 1 in 150 cases of under 1 year olds with Luekaemia that did not to require a transplant; he beat a lot of odds. Over the course of the following 2 years we watched him grow into a such a fun loving fiery little boy. He was absolutely full of life and would find the fun and happiness in anything and everything he did. He acquired quite an extended family in and out of hospital, be it nurses or charities; he became extremely loved by a lot of people.

On the 2nd of March 2017 he finished treatment.

He rang the bell to declare he had finished receiving treatment for his Luekaemia and that he will begin visiting the “After-Cure” clinic once a month to keep tabs on his progress. He began nursery, of which he absolutely thoroughly enjoyed, and made some amazing friends.

Around the middle of June 2017, Callum started having tonsillitis and ear infections regularly. He’d go on antibiotics, bounce back, and then the Antibiotics would finish and he’d seem to get a high temperature and start the process again.

Towards the middle of July Callum wasn’t sleeping well. The only way we can describe it, is a child with stomach cramps writhing in pain. So we got him a visit to his consultant at Alder Hey and went over everything that had been going on,

His consultant immediately wanted him in the next day for a Bone Marrow test and looking at routine blood results, Callum’s white cells were on the rise once again. On the 27th July, after the bone marrow test, his consultant came in the room and pulled up a chair.

We were devastated. We had built ourselves back up over the past 4 months and it had all come crashing back down. My wife was pregnant with our 3rd Son and we simply did not know how to go on.

Work gave me 6 months off full pay no questions. We got a charity to help us with our eldest son to ensure he did not struggle or regress like last time and they visited him in school once a week and went through various child-friendly educational pieces to ensure he understood and knew what was going on and going to happen. Callum is a bit older and understands pain and fear alot more than he did back when he was a baby. Now we do have to explain the procedures to Callum in a way that he can undertsand so that he can be co-operative and allow them to do what they need to do. Also, this new protocol for Chemotherapy felt alot worse. The side affects seem to be more prevalent. He had hair to lose this time and we had to watch him choke/gag as he ate breakfast with it falling out. We had to convince him to shave it off by me shaving mine off too.

This time round there was no question; he is to have a Bone Marrow Transplant.

It is simply the best chance of cure, so we had to go to various meetings in the build up to the transplant. I will always remember the first transplant meeting we had; we attended the meeting and in the first 10 minutes of a 2 hour meeting it was said,

Now, when someone says that about your child it stuns you, stops you, holds you in your tracks. From then on it became a lot more difficult to concentrate for rest of the meeting, listening to all the side affects and problems. How can your brain just move on from that kind of information?

We then had a radiotherapy meeting. As Callum turned 3 years old during treatment he past the 3 year old threshold to have radiotherapy. Again this was an hour long meeting full of side affects, essentially, coupled from both meetings.

He is more than likely going to be sterile, not likely produce puberty hormones and so will require hormone therapy when he’s a teenager. He will also suffer from whatever you would associate with “old age” such as angina – heart issues and such. His memory recall and knowledge storing (IQ) may also be adversely affected.

But, as a parent, you have to get on with it now an deal with what you have to, later, no questions. Callum had transplant on the 8th of December. He received this in the form of a simple bag of blood, but it was far from simple. Someone in Germany had given a part of them to save our son’s life. This bag was defined by a charity as his second birth day. The start of great things to come.

He had to have 2 days of chemotherapy, 3 days of radiotherapy then his transplant and then he had to recover. He’s done amazingly well to get through and recover this far.

And finally, he was allowed home on the 40th day of being in the hospital. The 2nd time round.

He is now at home and doing remarkably well. His bone marrow is currently 100% donor cells and his immune system is beginning to grow. He is on 10 different medications and some are required up to 4 times a day. All to support him and help him fend off possible bugs and infections.

He still isn’t eating and we do have to put fortified milk through a nose tube to feed him regularly, but he is improving. In comparison, these are tiny issues that are welcomed compared to what could have happened.

After these last 6 months, his life can finally become that of a normal 3/4 year old. He can begin nursery again, be allowed to go out to town, soft play; the possibilities are endless.

We as a 5 unit family can once again begin rebuilding our life and start enjoying the things that we have missed or not been able to do.

If you’d like support or somewhere to find out more information and cancer, take a look at the links below.