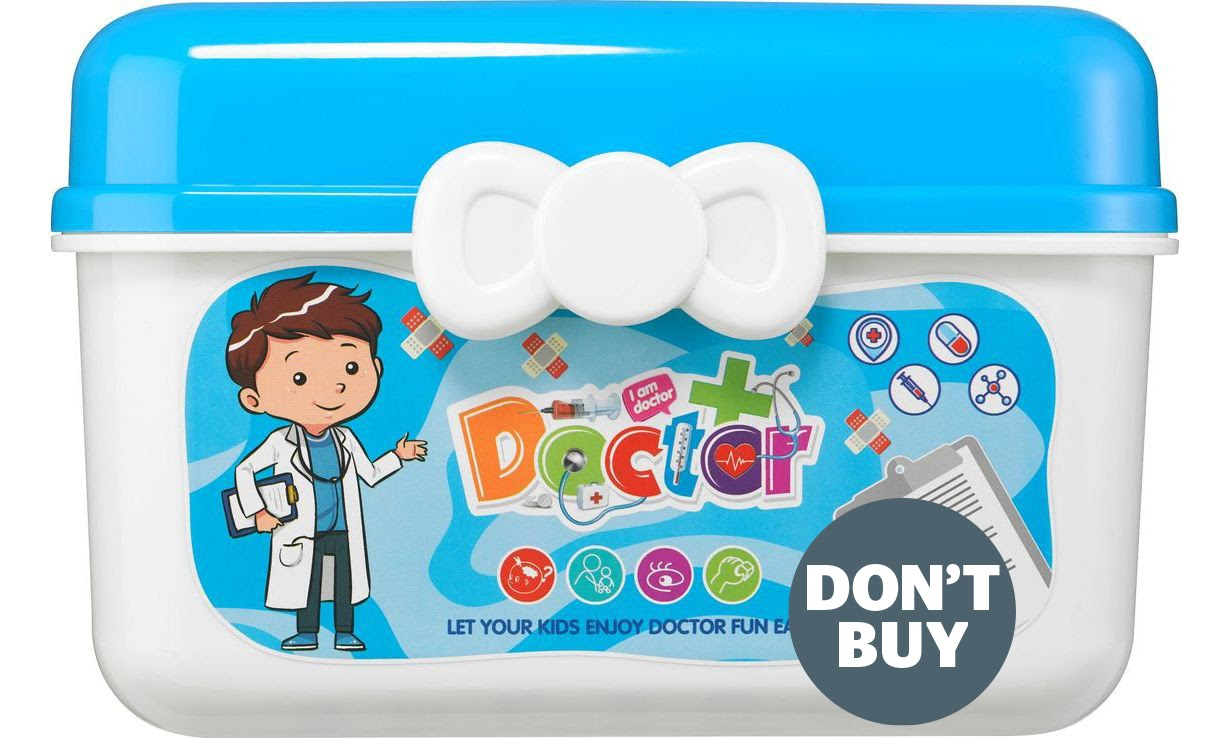 Consumer group Which? tested 28 toys bought from Amazon Marketplace, AliExpress, eBay and Wish and found 12 posed a safety risk after failing one or more tests.

Investigators found a total of 50 safety failures across the 12 toys, with 10 toys presenting a choking risk and two posing a strangulation risk for children.

Which? also found two toys that had either magnets or batteries that could be easily accessed, which could cause serious injuries to children if swallowed.

All the toys were tested against British safety standards.

Five of the products that failed tests were sold on Wish, making it the worst offender, Which? said.

Three were sold on eBay and AliExpress respectively, and only one was available on Amazon Marketplace.

The most dangerous toy in the investigation was a 51-piece doctor’s playset – described as a toy for a baby or toddler – sold on Wish.

Which? described it as “filled with unsafe toys” with “at least 20 choking hazards” including toy plasters and pills, adding: “Most of the toys in the set broke into small and dangerous parts far too easily, including play scissors and a notepad which revealed sharp points/”

A similar doctor’s set sold on AliExpress contained 10 potential choking hazards, while a long cord on the doctor’s coat could present a strangulation hazard, the watchdog said.

A set of magnetic building blocks sold on Amazon Marketplace and aimed at children aged three years old and above broke open to reveal tiny magnets that were almost four times as powerful as they were permitted to be under current standards, which could pose a choking risk.

Which? also found a toy tablet sold on Wish that posed a serious risk as the battery cover could be easily removed to reveal a button battery.

Both magnets and button batteries can be a choking hazard and cause serious injuries or chemical burns if swallowed.

Which? shared its investigation with the four online marketplaces and all 12 products that failed have since been removed from sale.

Unlike UK retailers, online marketplaces have limited responsibility for ensuring the products sold on their platform meet legal safety requirements, repeatedly allowing unsafe toys and products to make it onto their sites.

The UK’s product safety regulator, the Office for Product Safety and Standards, is currently reviewing the product safety system, including regulation of online sales.

Which? head of consumer protection policy, Sue Davies, said: “Many parents will be appalled by our research which has revealed that some toys bought from online marketplaces are failing to meet safety standards and could pose a serious safety risk to children playing with them.

“Consumers should be able to trust that products sold in the UK are safe and meet the standards required, yet a woeful lack of checks and monitoring by online marketplaces means dangerous toys are entering people’s homes.

“It is absolutely crucial that online marketplaces are urgently given greater legal responsibility for the safety of products sold on their sites so that consumers are far better protected from dangerous and illegal items.”

An AliExpress spokesman said: “The safety of our customers is of paramount importance to AliExpress. After being contacted by Which?, we took swift action and removed the affected products.”

An Amazon spokesman said: “Safety is important to Amazon and we want customers to shop with confidence on our stores. We have proactive measures in place to prevent suspicious or non-compliant products from being listed and we monitor the products sold in our stores for product safety concerns.”

An eBay spokeswoman said: “We take the safety of our users extremely seriously and work closely with authorities including Trading Standards to help ensure sellers and listings on eBay comply with laws and regulations. We have removed the products identified by Which? and taken the appropriate action on the sellers.”

Wish said: “All merchants on our platform are required to adhere to local laws and safety standards where their goods are sold. In the rare instance where a product falls foul of those standards, it is promptly removed and, where appropriate, the merchant in question faces a potential suspension from the platform.”

Have you ever worried about the quality of your child’s toys? Tell us your thoughts down below!