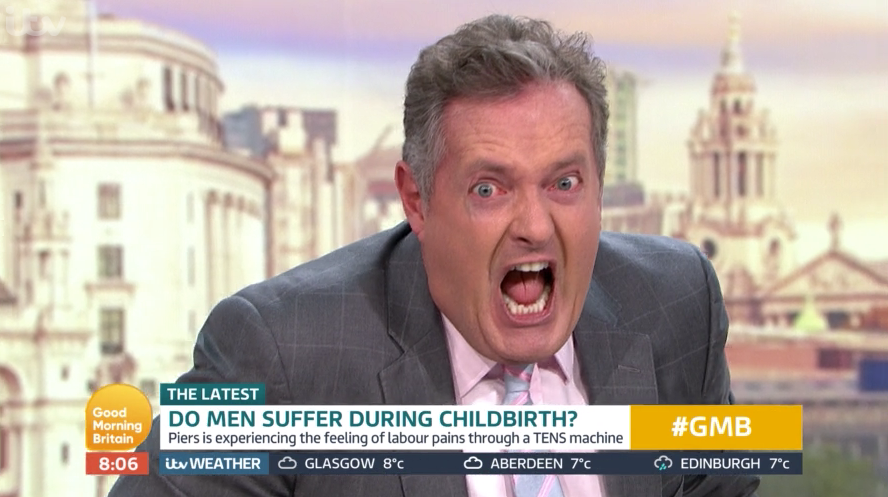 Founder of The Dadsnet, Al Ferguson, today joined the TV presenter who promised never to make another joke about labour pains.

Piers Morgan jumped off his chair in agony as he tested out a childbirth simulator.

The TENS machine, or transcutaneous electrical nerve stimulation, is capable of reaching a power level of over 100, yet Piers Morgan only managed to reach 60. (Level 40 being likened to an average real-life contraction.)

Unable to take the pain any longer, he yelled at the operator, demanding it was taken off. Following which, he stated that his respect for women had “gone through the roof.”

To the women of Great Britain, I have to apologise, he said. That was agony… my respect for women in childbirth has gone through the roof.

I’m never going to make any joke about childbirth again.

Al Ferguson, founder of The Dadsnet was invited onto the show alongside Piers & Susanna to discuss how despite mums going through the tremendous physical pains of labour, emotionally, Dads are impacted as well.

Al Ferguson also had the shock pads positioned on his stomach but as with live TV, producers ran out of time to test Al to see whether he can withstand as much pain as Piers.

Not to worry though, back in the green room, Al had his own ‘labour experience.’

We’ll share the video later on our social channels so be sure to keep an eye out.