What was your highlight from 2014? Have you made some of your most memorable memories this year?

For me, 2014 was the year in which my son, Ted was born. It’s obvious that this was the highlight of the year by quite some way but there’s been a lot going on. I’ve had some highs and some lows, as I’m sure we all have but I felt it necessary to take a moment to reflect on 2014 from start to finish.

Of course, I’m going to be reflecting in a typical man way; using bullet points to make this nice and easy.

# I remember unveiling the scan photo this time last year.

# I also remembering feeling constantly worried from the recent miscarriage experience we had faced.

# Late January I launched The Dad Network blog. (You can read the first ever post here) Where it came from is a bit of a blur… I wanted a voice and a space to share my angst and feelings. The local pub didn’t seem suitable so I found my own corner of the web to vent and muse. I’m not sure why I called it The Dad Network and I was totally surprised when people started reading it!

# February half term was my birthday and the wife took me away for a night in a hotel with a massage included. It was very nice indeed!

# In march we received our first product to review… A cup for toddlers to use. It was at this point that we saw an opportunity and reached out to brands and companies.

# V-day was in April and after everything we had been through with the miscarriage, it was a special day for us. We were in France on a skiing trip; how I managed to get the wife there at 6 months pregnant I will never know!

# May was a busy sporting month for me. A 100 mile sportive followed by a couple of Triathlons. Turning up late for your start time with a 7 month pregnant wife and hurrying is very stressful and doesn’t do anything for getting oneself prepared for a race!

# It was June that saw us escape for our very last time away on our own. We managed to book a lovely hotel a couple of hours away and schedule in some R & R for the very last time. As we arrived we heard the bass of some very loud speakers… We then saw hundreds of teenagers dressed to impress and found out it was also prom night! R & R went out the window but we managed to laugh it off. (Plus, we complained and still have a complimentary night to use up…) June also saw The Dad Network go from the dark design to our nice clean look; we haven’t looked back. 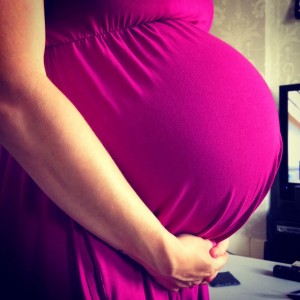 # August arrived and exactly as it did we found ourselves in the delivery room with a back to back baby, no ‘epidural man’ available and a lot of pain. August 1st 2014: Ted Rex Hugh Ferguson was born and it was certainly the best day of my life. I’ll never forget the moment I saw him for the first time and I’ll never forget the joyous shock on the wife’s face either. What a day! It’s these moments that make taking the time to reflect on 2014  important.

#…that in September this image, perfectly timed, decided to make it’s way around the globe visiting every major media online publication: Buzzfeed, Mashable, Todayshow, Huffington Post, Aplus, Perez Hilton and The daily Times to name a few. The Dad Network was officially viral.

# Following our viral success we were asked to begin writing for BT and a couple of other websites on top of our usual blog for Baby Centre UK.

# By November we were walking zombies from having a baby that doesn’t sleep. The wife took the brunt of it, but real tiredness is unknown until you have a baby!

# Getting ready for the boy’s first Christmas was exciting and brought a fresh outlook to the whole Christmas thing. Where it was once a season filled with stress and financial burden, it suddenly seemed worth dealing with all that, as the focus shifted away from politics and ‘have to’s’ and landed on the boy. A much better focus and one that really did reveal a far more appealing meaning of Christmas. 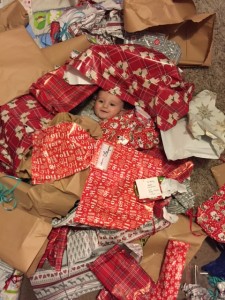 # And here we are… At Least, I think that’s what happened. I can hardly remember anything pre-baby! Being able to reflect on 2014 is easier said than done!

We’ve had a great year exploring the world of pregnancy, blogging, labour and having a newborn and now we’re looking forward to 2015 to see what other memories we’ll make to keep treasured.

One thing I can’t wait for is seeing the boy grow up to walk and talk. I’m looking forward to seeing his personality develop right before my eyes and getting to know him better and better.