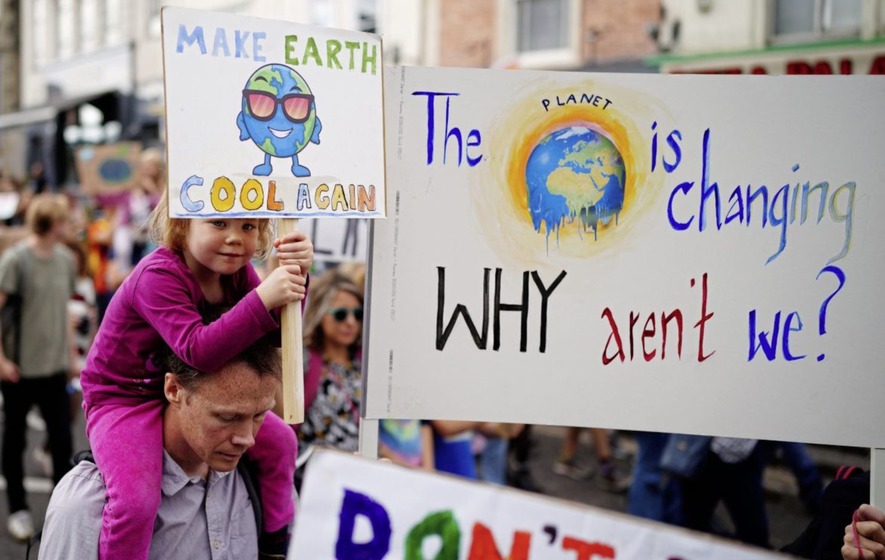 One school asked pupils to bring in Christmas jumpers to swap them instead of buying them new, and in another school the nativity scenery and costumes were all reused or recycled.

Eco-conscious pupils, parents and teachers are demanding more action on the climate crisis in schools – and Christmas time is no exception.

It comes after youth activists took to the streets of Glasgow during school time last month alongside campaigner Greta Thunberg to demand action on climate change during the global Cop26 summit.

The young Swedish activist has inspired many pupils in UK schools to call for greater change in recent years, school leaders have said.

She told the PA news agency: “What Greta has done I think is galvanise their opinions and make them realise that, yes, it is worth making a stand about.”

This year, for the first time, Portsmouth High School ran a festive jumper swap among its pupils to reduce the purchasing of new seasonal clothes every year.

Mrs Prescott told PA: “It was really welcomed by the parents, but also by the girls. They’re quite environmentally conscious and they’re very into sustainability and they like the idea that something that isn’t worn out they can recycle and pass on to somebody else who can use it the following year.”

Glitter is not allowed at the private girls’ school due to its impact on the environment. “At one time prep schools and primary schools were full of glitter, at this time of year we have banned it,” the head added.

Some schools also tried to reduce the amount of festive decorations – such as Christmas crackers and table cloths – they use to reduce waste.

“I think crackers in schools probably have had their day and we probably won’t have crackers at all next year,” Mrs Prescott added.

Graham Frost, head of Robert Ferguson Primary School in Carlisle, has banned non-biodegradable glitter from this year due to environmental concerns.

He told PA: “I have outlawed the plastic glitter for craft activities so essentially anyone who puts an order through the school office they will be vetted and turned back if they try and order regular plastic glitter.

“My hope is that if more schools take that line then the suppliers that supply schools will think very carefully about sourcing things which are more in keeping with our environmental sensitivities.”

Mr Frost added: “I think there is a growing feeling that if we’re in the business, as we are, of preparing children for the future, with that future being imperilled by climate change, it is therefore imperative that we as schools do all we can to be a force for change and, to some extent, a force for influence.

“So enabling young people to write, to speak out, to express their response to their learning in environmental education is becoming much more important.”

At Canary Worth College Glenworth, a primary school in London, old boxes were used for the scenery, and old clothes and rags for the costumes, in the nativity production in order to be more sustainable.

Martin Blain, head of the school, said: “This year the environment has become our main agenda item and they [staff and pupils] were very keen that we weren’t using new things to do that.”

At the school’s Christmas lunch, festive decorations were also scaled back.

On the environment, Mr Blain said: “The fact is it is very much on the agenda. People are concerned about it and I think this is driven by young people.”

James Bowen, director of policy for school leaders’ union NAHT, said: “Young people are especially passionate about doing more to protect the environment and schools are responding to that.

“Figures like Greta Thunberg are inspiring to young people who see that they can make a difference and make their voices heard. Christmas can be a time of excess and it is more and more causing people to think about how that impact can be mitigated.

“We know that pupils are so much more aware of their environmental impact these days and at this time of year in particular it is they who are asking questions about how they can enjoy a more environmentally friendly Christmas.

“Whether it’s recyclable wrapping paper and Christmas cards, or the reduction of plastics in presents, many are thinking about how they can make a difference.”

He added: “The move towards more eco-friendly practices is something schools consider year-round, and they are introducing innovative new ways of working all the time – often at the suggestion of their own students.”

Geoff Barton, general secretary of the Association of School and College Leaders, said: “Schools put a great deal of focus on the environment in all that they do because of the vital importance of this issue in general and particularly for their pupils who rightly feel very strongly about the need for a greener world.

“The recent Cop26 climate change conference may well have intensified that interest and Christmas provides a great opportunity to channel this enthusiasm into practical activities.”

What do you think about swapping Christmas jumpers? Let us know in the comment section below!