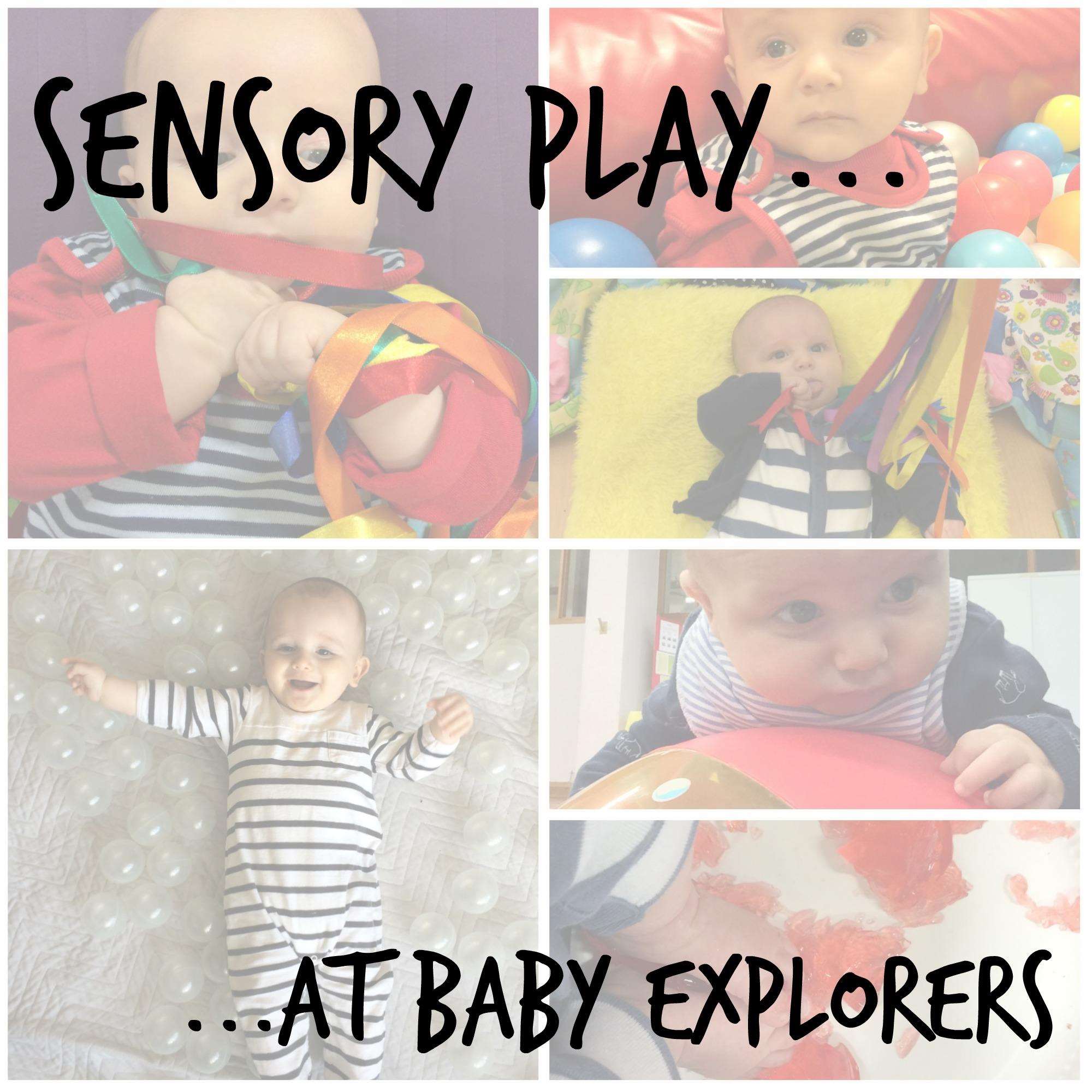 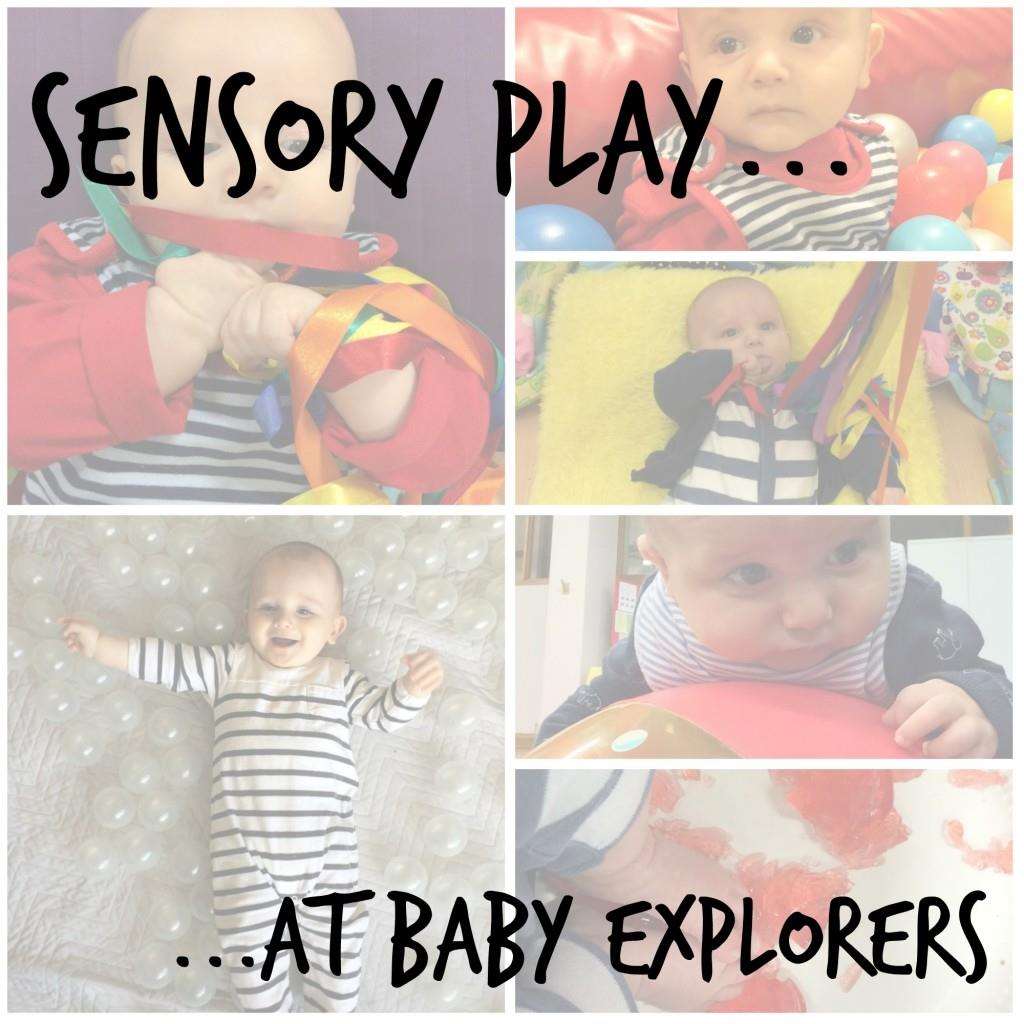 Sensory play for babies can really help a baby’s development and it’s a lot of fun!

Every week Ted attends a Baby class called Baby Explorers. It lasts 50 minutes and is without doubt one of his favourite times of the week. He has tried many baby classes over the past 8 months but this one wins, hands down.

The sessions offer opportunities for the babies to learn through play and explore the world around them through touch, sound, vision, taste and smell. They stimulate the baby’s sensory and physical development from as young as newborn.

The sessions are themed and range from Teddy Bear’s picnic to space adventures.

The class teacher is as enchanting and mesmorising as a Disney Princess and leads each activity with such enthusiasm you can’t help but enjoy every second. The babies are spell bound by her energy and expressiveness.

Each class provides a huge selection of activities and props that stimulate the baby’s senses. The activities focus on developing fine motor skills, hand-eye co-ordination, movement, eye-contact and social interaction.

Goodness knows where they find the time to make all of the resources, or the room to store them! The range of experiences offered to the babies each term is beyond any imagination.

Over the past 8 months Ted has touched every material you could think of- from soft silk to crinkly silver foil. He has been tickled with feathers and ribbons and has played in sand and water. He has played numerous musical instruments and has explored the world of sound through banging, tapping and rubbing objects. His sense of smell has been heightened with the use of little bags containing different smelly things from lavender to cinnamon. He has seen the most incredible sights – rainbows made of floating chiffon scarves, falling rain made with pompoms and bouncing balloons and balls of every colour. He has sat beneath multi-coloured parachutes with rubber ducks, stars and teddy bears hanging down above him. He has watched light shows, puppet shows and sat amongst hundreds of bubbles.

Ted has been going to these classes from just a few weeks old. At first he would lay on the mat and look around. The experience would happen to him whilst he lay happily soaking it all in. Now Ted is sitting up and creating his own experiences with the props provided. The classes are so carefully planned that they match the range of ages and abilities perfectly.

I often get asked by Dad Network followers about the classes Ted attends so I thought I’d talk you through a typical class.

The session starts with a welcome song. The babies seem to recognise it and are encouraged to wave and look at the other babies. Then the theme for the day is introduced. Today’s theme was weather. Incredibly Ted went wearing a cloud babygrow! He must have known! The mums and dads were taught a song about weather with sign language actions which the class then sang directly to their babies. The wind was represented by the blowing of mini windmills and by waving coloured chiffon scarves for the babies to watch above them.

The parents then lifted a parachute over the babies with hundreds of different coloured ribbons hanging down as ‘I can sing a rainbow’ was played to them. Next the babies were given buckets and wooden spoons and encouraged to bang them to create the sound of thunder. The rain was recreated using mini bottles filled with different objects- rice, stones and hama beads. The babies could shake the bottles and explore the sounds.

The class stops half-way through to allow for free sensory play. There are hundreds of different toys to play with from ball pits to mirrors, pop up tents to touchy-feely books.

After free play the babies were bought back to the main group for more singing. The bubble machine covered the room in bubbles for the babies to watch and try to reach for. Then came the rain- an enormous tin foil rain cloud with pom poms representing the rain fall was hovered above each baby in turn.

The class ended with a puppet show of teddy bears and cartoon characters singing a weather song and representing the weather with a varity of props. The babies sat mesmorised by the puppets and the music.

Before the class teacher says good bye, we all sang the goodbye song, encouraging the babies to look at each other a wave.

The class is an hour of sensory experiences that bring absolute delight and pleasure. Ted enjoys every second that he is there and we often get great ideas from the classes that we can recreate at home (although on amuch smaller and lesser scale)

We found the Baby Explorers class by chance and thank goodness we did. It has been one of the most incredible experiences for Ted. He has developed so many skills and made lots of friends.

If there is a class near you I highly recommend trying it. If not why not try and create some of the sensory experiences at home. Hmmmm… there’s an idea for a post!

*We pay for all of these classes and haven’t been given any form of discount. I guess this is the opposite of declaring a sponsored post because it’s NOT one! We just love baby explorers, Ted loves it and so we wanted to share it. :)