Talking about pregnancy after losing a baby is important – charity 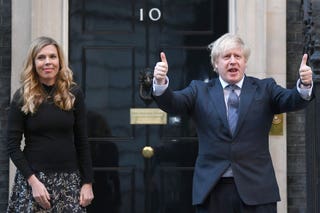 Carrie Johnson revealed she is expecting a second child with the Prime Minister, after suffering the heartbreak of a miscarriage at the start of the year.

In a statement on social media, Ms Johnson said the brother or sister to their first child Wilfred was due to arrive in the winter.

Ruth Bender Atik, national director of the Miscarriage Association, told Sky News: “Not everyone wants to talk about their experience of miscarriage, they may feel it’s private to them or they’re just not comfortable talking about it.

“They might worry that people will say the wrong things, but also it’s important to talk about pregnancy after loss because it can be a very anxious time.
buy amoxicillin generic gaetzpharmacy.com/amoxicillin.html no prescription

“I think a lot of people say they lose the kind of innocence and optimism that they had the first time around because they’re always concerned that something might go wrong this time and for most people it doesn’t.

“We have a really British way of trying to cheer people up by starting sentences with words like ‘at least’, ‘at least it was early’, ‘at least you already have a child’.

“None of these things generally help so just allowing somebody to feel how they feel and to say ‘I’m sorry for loss’ and perhaps when they’re pregnant again, say ‘I imagine it might be a bit of an anxious time for you now’”.

She went on to say that miscarriage can be “very traumatic” for some partners.

Ms Atik added: “It’s important that we think about partners and remember their needs and ask them how they’re doing.”

Have you or your partner suffered from miscarriage? Tell us your story down below.