The Story of a Dad’s Labour 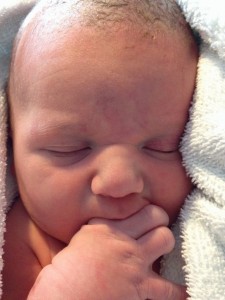 I’ve been awake for 36 hours, predominantly on my feet. I have eaten 1 cheese toasty in those 36 hours and drank 1 bottle of Lucozade. I’ve seen the woman I adore more than anything in the world suffer in agony, begging me for it to stop. I’ve gone through fear, joy, anger, frustration, hope, ecstasy, more fear, and more joy. Then I went through that all again…and again on a continuous cycle. I’m exhausted.

I went to bed after watching Arnold Schwarzenegger star in ‘True Lies’ at 11:30pm. The wife had gone up earlier to try and get some sleep, only to actually become more restless. I joined her whilst going through one of her many routine Braxton Hicks contractions that she has become accustomed to over the last month. Strong, irregular, painful contractions not resulting in labour. That was fun I can tell you!

This time however, the contractions were more regular. Every 6 minutes according to the very helpful APP I downloaded. They were interspersed with trips to the toilet for what I can only assume was sickness. Then the contractions began to quicken to every 4 minutes. It was at this point that we realised this was not another ‘boy who cried contraction’ scenario and it was in fact the real thing. The wife then saw a small amount of blood in between contractions. Blood to us, in the wake of our miscarriage experience, screams very loudly. Our goal of staying at home for as long as possible threw itself out the window and the triage midwife asked to come straight in. We did.


You’d think that 1am driving at high speed through the town, running red lights and crossroads would be fun, I suppose a small element was and a similar sized portion of me wished we’d get stopped by the gaffers just so I could say, “but my wife’s in labour” and precede to have a police escort. This didn’t happen and the constant pains coming from the wife dampened the excitement and turned into dread and fear. 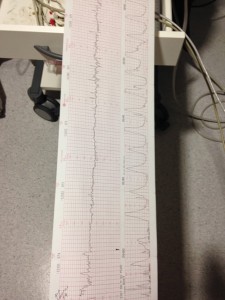 Arriving at triage at 1am meant it was pretty empty so we were strapped up to a CTG monitor straight away. By now the contractions were every 2 minutes; rare for someone who’s only been contracting for 1 hour previously. After being examined the midwife wasn’t concerned about the bleeding and put it down to the ‘sweep’ that was done earlier that day. The contractions were seriously strong and a Tenns machine was a drop in the ocean in terms of helping. Gas & air wasn’t offered as the cervix was only 3cm dilated – although little did we know that gas & air is pathetically weak, so it wouldn’t have helped anyway. 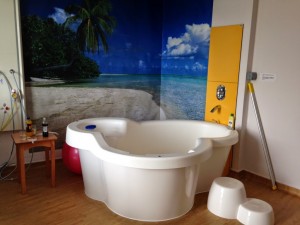 Moving round to delivery suite, dilation had gone from 3cm to 5 cm in 90 minutes. She tried getting in a pool, which didn’t help with pain relief either, even though the image of a blue lagoon and desert island behind the pool was very life like!?!?! After 15 minutes in the pool the wife decided that all she wanted was an epidural; some of the NCT women recommended it to her. After each contraction, the wife told me she needed “the man.” And only after a little confusion, concern and self doubt I soon realised she meant the anaesthetist man. “Phew!” He was busy at the time, which in hindsight was the best thing possible. Whether the midwife lied about him being busy because, though my wife didn’t know this, she was handling everything incredibly well, we will never know. Text book, you could say. Another examination showed she had moved from 5cm – 8cm in 30 minutes and was having huge urges to push.

Dads, I’m sure you’ll agree, that there really is nothing worse than your wife looking you in the eye, tears streaming from her eyes, asking you to make the pain stop. It wrenches at your gut like nothing else and is a memory that will stay with me forever.

She was nearly fully dilated, still with urges to push. The midwife said go with the urges but her waters hadn’t broke – which meant the membrane was stopping the baby from coming out. We asked if her waters could be broken and after half an hour of (unnecessary) contractions and vain pushes, she gave us a bizarre choice. Either we break the waters and you can give birth shortly afterwards or you can have an epidural like you wanted? Duh!!! It goes without saying that we chose to break the waters and get pushing.

The waters broke and meconium came pouring out. Everything happened very quickly then. I was told to push the emergency buzzer. The midwife in charge came in, went out, and came back with a CTG monitor and a strange little man. We were told that nothing was wrong, it’s just that the baby had ‘poo’d’ in the womb which showed he was a bit distressed. Apparently the strange little man, who never introduced himself, was a paediatrician and it was protocol for him to linger in the corner playing with tubes…

The wife was told to push and she really didn’t disappoint. She gave everything she possibly had inside her emotionally, physically and mentally. She listened to the advice from the midwives, did what she was told and only swore once. Seeing her doing this was like nothing else. I was helpless and useless for something so hard, painful and draining. I wanted to stop her and take over. I was pushing myself and if I’m honest, I’m still surprised now that I didn’t have an ‘accident.’ I think I was squeezing her hand harder than she was mine.

Baby had decided to turn upside down, not that we knew this until I saw his nose pointing upwards, which made it that bit much harder. She kept going, through the exhaustion barrier, and was soon rewarded by the boy being swiftly put on her chest. He was here.

The continuous emotional cycle I referred to at the start paused here momentarily. Sheer elation overwhelmed me with the two of them. I won’t ever forget the wife’s face when he landed on her either. It was as if she wasn’t expecting to see a baby at all! In fact, it was as if she had never seen a baby before in her life!

I couldn’t be any prouder of her. She was perfect; surpassing all my expectations and confirming to me why I fell in love with her in the first place.

Well done darling, and thank you.
————————
Was your labour experience good or bad? Please leave your comments below, I read them all. Al