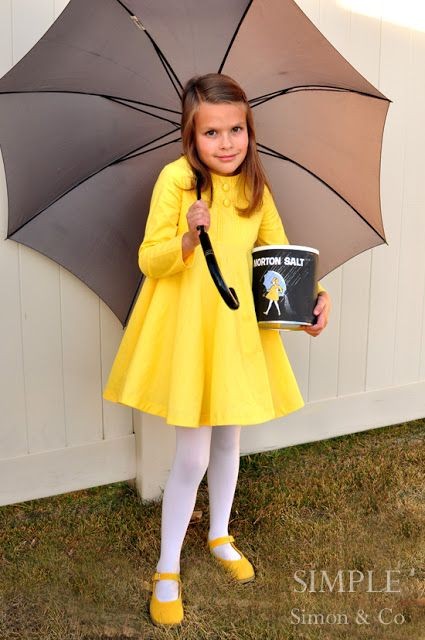 It’s that time of year, when parents start scrambling around for a half-decent Halloween costume. Not content to hand over our hard-earned dollar to the likes of Tesco and Asda for the clothing equivalent of a ready meal, we get it into our heads to make our own.

So we start sifting through our recycling bins, hoping to find inspiration in an empty box of Coco Pops, all the while trying desperately to remember where the heck you actually buy pipe cleaners from (Wilkos?)

However, maybe we should rely on the faceless corporations to dictate what we should and shouldn’t dress our little ones in, come Halloween, otherwise you end up with stuff like this:

Yeah, I had to Google her as well. You know your outfit is poor when you have to hold a prop basically spelling it out for people. Admittedly, this is a US company, so I wouldn’t expect it to travel well, but come on, Morton Salt? This would like me dressing my kid up in a white suit and a Panama hat, then getting him to hold a tin of Del Monte peaches. You know, because he’s meant to be the Man From Del… Ah, forget it.

Again, having to hold a prop to explain who you are is never a good start.

Also, call me cynical, but this smacks of being recycled from World Book Day?

Now, unlike the first entry, I’ve no doubt that most people know who she is, but without a more recognisable character next to her for context (Miss Trunchbull) she just doesn’t stand out enough visually for it to work.

Remove the book and she’s just another little girl in a school uniform. And anyway, are we really to believe in Matilda’s universe that there’s also a book about her? Unless it’s an autobiography, which makes her ever so slightly big-headed.

It’s just not clear what this is meant to be at first glance. It looks like either the world’s most boring tracksuit or Jack Skellington is about to get out away for a long time.

This is the problem with the more abstract costumes, the danger is that you’ll keep having to explain what it is to all and sundry. This could mean all that time you saved throwing something together is then lost through the endless re-explanations while you wish you’d just bought that pirate outfit for £7.99 from Morrisons. But this is by no means the most abstract costume.

There’s an entire subgenre dedicated to outfits that are just had puns, and the ‘fun’ presumably stems from people trying to guess what you are. Aside from someone who needs to get out more, obviously.

Harder to guess than the stick-man, at first glance they resemble ninjas, which would have been a far better idea. But no, some killjoy parent obviously thought ninjas were way too violent, took away the throwing stars and nunchuks, slapped some extra material across the eyes, and told their kids they were going trick-or-treating as shadows.

Now I’m not going to turn this into some sort of massive tirade about how the ending of Grease isn’t a happy ending at all, but actually kind of horrifying. Let’s just assume we can all agree that dressing up your little girl as someone who changes their entire persona just to please a boy is all kinds of messed up.

I’m surprised she’s not holding a lit cigarette just to complete the ensemble. If it were just random greasers as opposed to Danny & Sandy, these outfits would be passable. As it stands, they just seem inappropriate.

So there you have it, a run-down of a few of the very worst that All Hallows Eve has to offer.

Maybe I’ll do another one next year when hopefully an impeached Trump will be occupying the number one slot.

If you have any ‘worst’ Halloween costumes to share, please send them to us on our social media!