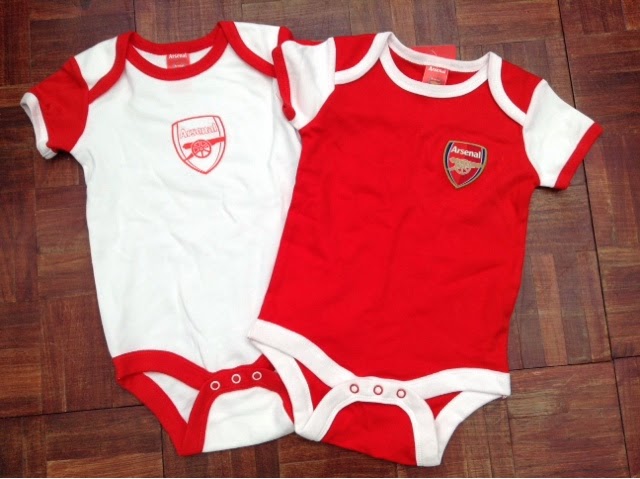 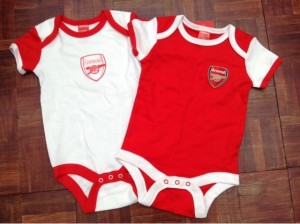 Flags are flying out of windows. BBC3 are showing the greatest moments. Pubs have had the all clear to open late. Those crappy flags that fit onto car windows have emerged. Squads are about to fly out.
World Cup Rio 2014 is almost upon us!
And, like millions of people, I and my son Rex are excited.
In my excitement I clicked onto eBay and bought Rex’s first football tops. (Actually there 18-24 months, but I will be seeking some smaller ones.) 2 gorgeous arsenal baby grows. I showed the wife who tried to veto them on the spot. I cut her short immediately, put my foot down. After all, he is a gooner already. I’ve already made allowances for his bed time and he’ll be staying up to watch the games. It was a difficult negotiation. The wife was claiming that she’s tired, to which my response was that she can sleep on the sofa whilst we watch.
I asked the wife today what her thoughts would be when Rex is about 6 or 7 and asks to stay up to watch the games. She replied saying depends if it was a school night or not. But really I was just making conversation. She calls the shots about outfits, hairstyles, routines, food…but I will call the shots about whether he stays up to watch football or not.
Dads prerogative!